This is why Tembisa residents started deadly riots

Electricity was at the root of dissatisfaction 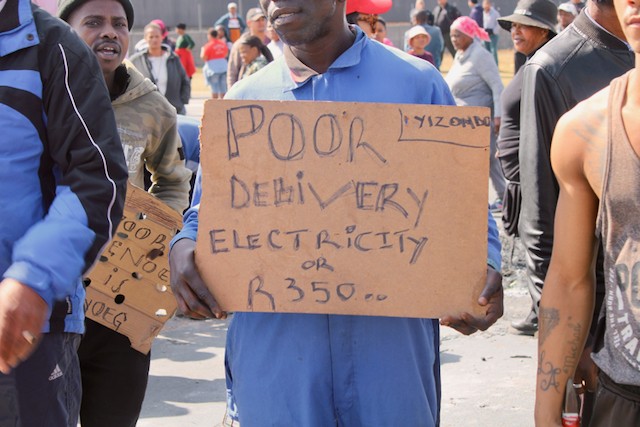 Last week, residents in Geluksdal, Ekurhuleni, were on the streets protesting over the loss of free basic electricity for all households. Photo: Kimberly Mutandiro

When Tembisa exploded last week, resulting in four deaths, the Ekurhuleni mayor said she believed the protest was aimed at making the township “ungovernable” for the DA-led multi-party coalition.

But there were protests too in Geluksdal, where people burnt tyres and blocked roads, and complaints voiced in Kwathema and Tsakane.

One of the main causes of the unrest was that until May this year, all residents in Ekurhuleni used to get their first 100 kilowatt-hours (kWh) of electricity free. But this was adjusted, the municipality says, when it implemented a National Treasury directive for which only indigent households with an income of less than R3,500 a month can qualify. The free allowance for qualifying households is now 50kWh per month, with six kilolitres of water, free sewage services and indigent burials.

The municipality says the change was communicated in the budget speech, on social media, media platforms and its website. Ward councillors were also meant to tell their constituents.

The process of applying for indigent relief started before the cut-off was made, but many were struggling to fulfil the application process and others were sitting in the dark awaiting approval.

As a result, weeks after the new policy was implemented there were widespread protests and, in response, tear gas and rubber bullets. Protesters demanded that historic debt be scrapped, tariffs lowered, and the free 100kWh of electricity for all households brought back.

Many residents have been living without electricity because they cannot afford basic services, have historic debt, or have fallen behind on their payments.

City of Ekurhuleni spokesperson Zweli Dhlamini said that in order to qualify for the free 50kWh allowance, people need to first apply at a municipal office with copies of their ID, proof of residence and proof of income. After filling out forms, a social worker is then assigned to investigate and authenticate the application. As soon as the application is approved, residents immediately qualify for free basic services. This should take about a month.

Asked how many people had qualified, the municipality said it cannot yet say since the process had been restarted in May.

Those who owe the municipality and have defaulted will however have to apply through the department’s credit controller to make payment arrangements.

Then there are residents with no title deeds who face an additional bureaucratic struggle.

“We have thousands of title deeds yet to be distributed and some owners cannot be traced,” said Dlamini.

Residents without proof of title, he said, will have to contact their nearest Customer Care Centre. Statements of account could assist as proof of ownership.

We spoke to some of the residents who lost their electricity in May and have not been approved for indigent relief.

Paula Karelse and her family say they lived without electricity for eight years, because she owes over R100,000. Their water is rationed. In October 2021, the municipality agreed to give them the basic free electricity allowance. But in May, it stopped. Karlese says the municipality told her to pay a deposit of R3,698, because of her outstanding debt in order to qualify for the indigent policy.

Abigail Jacobs said she was asked for a R3,000 deposit to unblock her account as she owes R40,000. Only then could she get the indigent relief.

Many people we spoke to have fallen behind on their municipal payments and have bills of over R4,000.

In her speech in Tembisa last week, Mayor Tania Campbell told residents the City will write-off 50% of debt in excess of one year.

“We have resolved to stop any disconnections and declines of indigent applications for the next 90 days … We will be hosting a two-week service delivery open day, with the Finance, Health and Social Development Departments to assist all residents with indigent applications,” the mayor said.

“We want to increase the property value threshold for qualifying indigent applicants. This means that more of you will now qualify for the free basic services that are provided within the indigent social relief package.”

Next:  Eastern Cape towns without water for two weeks

Hundreds march to Parliament, calling for action against climate change