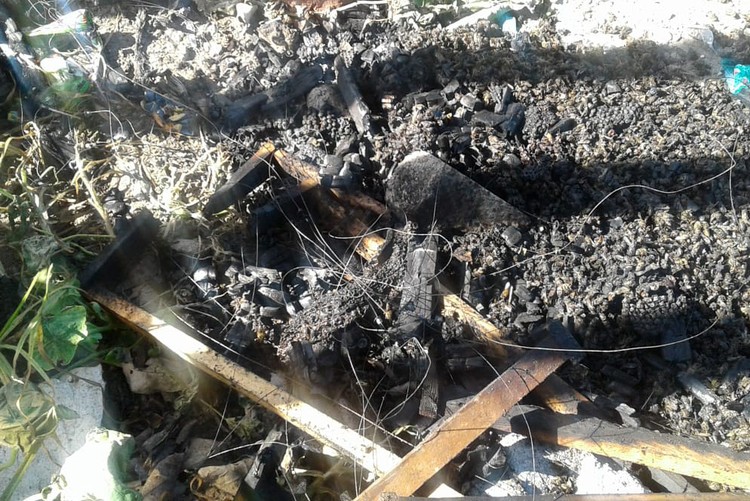 Last month we profiled Vuyo Myoli’s fledgling urban beekeeping business in Gugulethu. Named Beez Move, the hives are set up on school grounds near a train line and informal market.

Sadly, when Myoli came to work on Monday, he found that one of his two hives was burnt to the ground. He says that someone must have jumped the fence.

Myoli says that when he got there, some bees were still flying around the embers following the scent of the honey. “They don’t realise that the other bees are dead.” He is unsure of why anyone would do something like this. The hives and honey weren’t stolen.

After seeing the damage, Myoli went to Gugulethu police station to file a report but he says that he wasn’t taken seriously. “They made it out to be a joke. They don’t understand,” he says. Myoli says that he waited two hours before being helped and was told to return the next day, which he did.

Myoli says that the community just doesn’t understand the importance of bees which is why he wants to educate people.

Warrant Officer Joseph Swartbooi said that it is “unknown what caused the fire” and there are no suspects. He says that the Gugulethu police are investigating a case of malicious damage to property.

This is not the first time Myoli’s hives have been at risk. In June, people tried stealing his hives, but they were stung and dropped one of them, causing damage to the structure. “My bees are under threat,” he says.

Myoli says that it won’t be easy getting a new hive. “I need to raise money,” he says. He has lost about R4,000 worth of equipment and thousands of his bees are dead. Myoli has now moved his second hive to a safe location.

Myoli says that he is searching for a safer space for his operation. “I’m still going to continue catching bees in the township. They play a major role.”

Next:  This is why Tembisa residents started deadly riots