Court ruled that they were illegally evicted 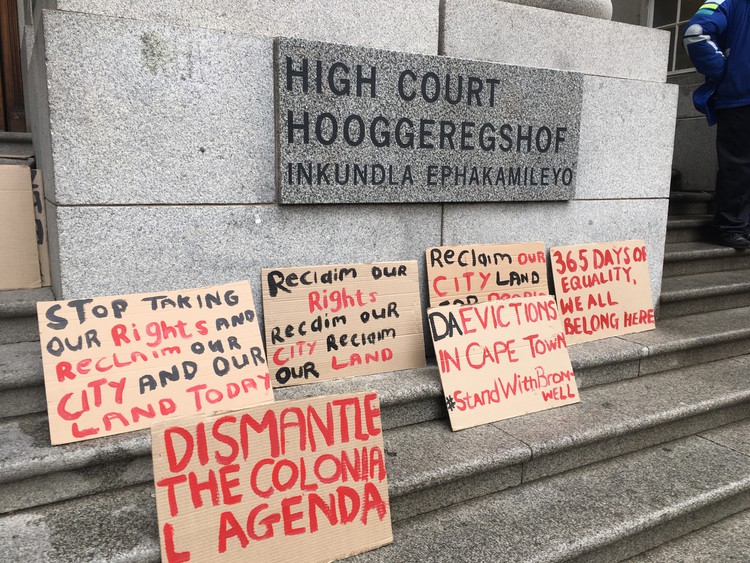 The Western Cape High Court ruled earlier this year that some shack demolitions carried out by the City of Cape Town during the Covid lockdown were illegal. Archive photo: Ashley Furlong

Forty-six people living in tents and makeshift homes on Sydney street in District Six will receive R1,700 each in compensation from the City of Cape Town. This after they were wrongfully evicted in September last year and their belongings were confiscated.

Last year, the Western Cape High Court ruled that the City wrongfully evicted the residents and that due process under the Prevention of Illegal Eviction from and Unlawful Occupation of Land (PIE) Act was not followed.

A recent statement by housing rights organisation Ndifuna Ukwazi said that there are about 100 people living in the parking lot, “many of whom have arrived to benefit from the relative safety and economic opportunity the inner city provides”.

On 19 September 2021, several law enforcement vehicles arrived at the parking lot on Sydney street where residents had erected their shelters. Residents were evicted and had their tents, housing materials, and other belongings impounded by the City’s law enforcement. This also included some of their personal belongings, clothing, mattresses, and blankets.

However, the City did not obtain a court order. According to the PIE Act, no person may be evicted from their home or have their home demolished without an eviction order handed down by a court. Residents took the City to court, arguing that the eviction was illegal.

The City argued in court that the residents were causing the demise of the area by making illegal fires, littering, and dumping, among other things. It said that the occupation presented an obstacle to building houses for District Six residents.

The City argued that it acted in terms of the Streets, Public Places and the Prevention of Noise Nuisances bylaw. But the court ruled that the City could not use its bylaws to contravene the Constitution, that the eviction was illegal, and ordered the City to either return their belongings or to compensate the residents.

In the ruling, Judge Rosheni Allie said that it was clear the residents did not choose to live in the parking lot “out of malice or willfulness, but out of desperation and need”.

Iddi Faraji Challah, one of the residents and applicants in the court case, said to GroundUp that the City took everything they had. Afterwards, for the purposes of the court application, every resident had to meticulously write down what they’d lost.

He said some of the payments have now been received and the rest are scheduled for next week.

Challah said that law enforcement officials are still visiting the premises and intimidating and searching residents. He said they have to erect their tents and structures repeatedly.

Ndifuna Ukwazi also said in their statement that residents are still getting fined by law enforcement for making fires to cook food or keep warm.

The City of Cape Town, in response to a request for comment, said that it will “pursue alternative means of supporting the protection of restitution land”. It said that while the court granted leave to appeal, this would’ve been costly, time-consuming, and had a “limited prospect of success in actually resolving the unlawful occupation”.

“In general, the City notes a pattern of Ndifuna Ukwazi’s clients indefinitely refusing all offers of shelter and social assistance while continuing to reserve public spaces from being available for wider public use. The City currently has a standing interdict to protect District Six restitution land from unlawful occupation, and the national government has further indicated its intention to join efforts to protect land in District Six.”

The article was updated after publication with comment from the City of Cape Town.

Next:  Book Festival brings authors and poets to the Cape Flats

Previous:  No shelter for homeless people in Knysna, but that may change soon