Shack dweller Nikiwe Sipenuka has no feet and no hands. She has been waiting for a house for years

Unclear why provincial government has not prioritised her house 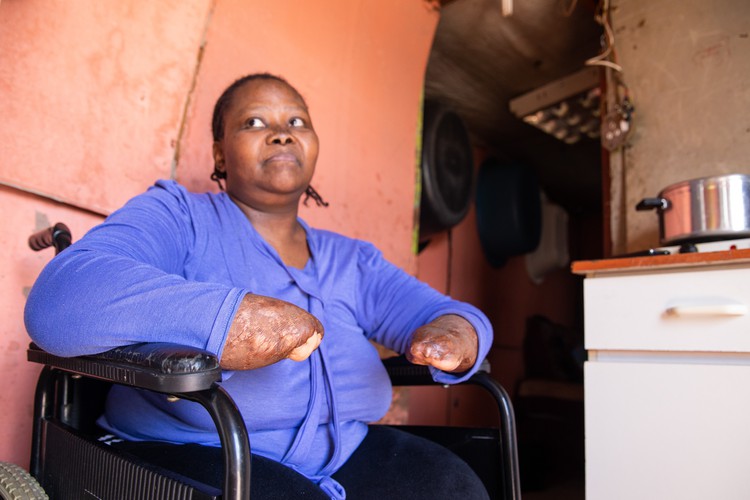 Shack dweller Nikiwe Sipenuka has used a wheelchair for almost six years after her lower legs and hands were amputated. She is waiting for a house. Photo: Ashraf Hendricks

Khayelitsha shack dweller Nikiwe Sipenuka is 41 and has no feet and no hands. She has been using a wheelchair since her lower legs and hands were amputated almost six years ago.

She and her husband applied for a house in 2012. In 2017 she submitted medical documents to the housing office. But, she says, she has not had any feedback.

Meanwhile, she has to manage in her shack, at the top of a sand hill in the informal settlement of RR section. The pathway to her shack is covered with sand and is too narrow for her wheelchair.

“When I go to a doctor’s appointment, I need to hire a car and someone has to carry me down,” said Sipenuka.

Sipenuka says she often feels like a prisoner in her own home.

She spends most of her days sitting inside her three-roomed shack because she relies on family members to help her move around. She lives with her three children aged 11, 17 and 23, and with her husband. She gets a disability grant monthly.

During the day, her sister, Nontobeko Sipenduka, who also has a disability and uses a crutch, helps her with daily tasks like cooking and eating.

Sipenduka has to use a bucket to relieve herself which her children have to empty.

“I want a proper house where I can at least try to do some things myself instead of depending on others,” she said.

Western Cape Department of Human Settlements spokesperson Marcellino Martin confirmed that Sipenuka had applied for a house with her husband through the City of Cape Town’s database in 2012. He acknowledged that her medical forms had been submitted about four years ago but it is not clear why the family’s application has not yet been prioritised.

Martin explained that the province relies for its housing projects on a list of potential beneficiaries supplied by the municipality. This list is then cross-checked against the national database to make sure the applicants have not previously been beneficiaries of the State.

He said all housing projects had a 5% allocation for people with medically certified disabilities.