Xhora Mouth in the Eastern Cape is starting to thrive

The making of a vibrant village 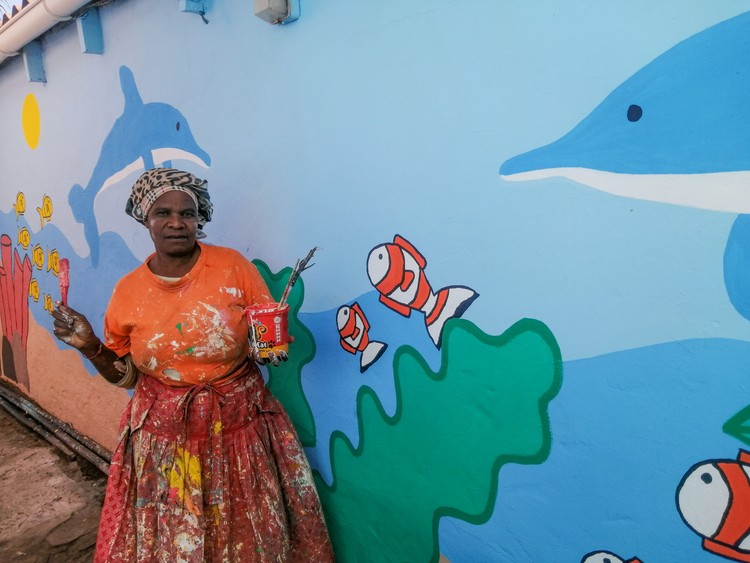 Nolethile Bokoda is a cook and housekeeper at Bulungula Lodge, in Xhora Mouth in the Eastern Cape. She is also an artist, and this year she decorated all the rondavels and the lodge common area with beautiful patterns and illustrations.

Bokoda started at the lodge as a casual worker in 2008 and became permanently employed in 2018. She cooks traditional food for guests and cleans the rooms. And every morning, she bakes bread in a potjie on the fire to serve with breakfast.

Bulungula Lodge is 100% owned by the community of Nqileni Village, on the Wild Coast. The Lodge is solar-powered and uses compost toilets. Members of the local community offer a variety of activities, from guided hikes to massages.

Nqileni Village is peaceful, scattered with rondavels and subsistence gardens. The lodge was opened in 2004 by founder Dave Martin in partnership with the community, in a bid to stimulate the local economy through tourism and provide jobs. The Mbashe local municipality has an unemployment rate of 87%.

“I always loved drawing but I never knew it was my gift,” said Bokoda. “I left school in standard 5 [grade 7], and never took my drawing very seriously,” she said. “But now I can put bread on the table for my family, using this talent.”

There is no fence around the lodge and members of the community often hang out with guests in the common areas, enjoying a drink at the end of the day. Goats, sheep and donkeys wander around, grazing on the lawn.

Martin says he first came to Nqileni Village while hiking along the Wild Coast. After travelling in other parts of Africa and seeing the constructive role backpacker lodges can play in rural communities, he decided to start a similar project in Nqileni Village.

But it soon became clear that the needs of the community far exceeded what the lodge would be able to achieve. In those early years there was no clinic in the village and no drinking water. A third of the babies born every year died of diarrhoea. The local primary school was a dilapidated mud hut and none of the adults in the community had passed matric. To respond to these challenges, Martin launched the Bulungula Incubator, with Rejanne Woodroffe, formerly chief economist at Metropolitan Asset Managers. The Incubator’s stated goal is to “end poverty within a generation” and build “sustainable and resilient communities”.

In the course of 18 years Bulungula Lodge and Bulungula Incubator have helped Nqileni Village and the wider area in which it falls, Xhora Mouth, develop sustainable sources of income and access to healthcare and quality education. The community has its own radio station and sports league.

On a Friday afternoon a group of children enjoy surfing lessons on the beach in front of the lodge. This is part of the Bulungula Incubator’s Thatha iLliza (Take a Wave) programme, which uses surfing to promote mental health.

The Bulungula Community Radio operates from a small studio in a rondavel, powered by solar panels. There, from 6 am to midnight every day, a full line-up of presenters, most of whom are volunteers, broadcast music, educational content, and local news to 78 villages in the area. Sikelela Thobigunja, known as DJ SK, is the station manager. “There is no electricity in this village and there is almost no TV. Our station has become the main source of information,” Thobigunja says.

He was also one of members of the team of six who took part in the Equality Collective’s survey on water supply in the area and the ailing Mncwasa Water Scheme. He told GroundUp that he knew the community radio was doing well when people he spoke to during the survey recognised his voice and told him they listen to the radio station.

The power of the radio station, Thobigunja says, was seen during the Covid pandemic, when they used the radio to provide crucial health information and encourage people to get vaccinated. 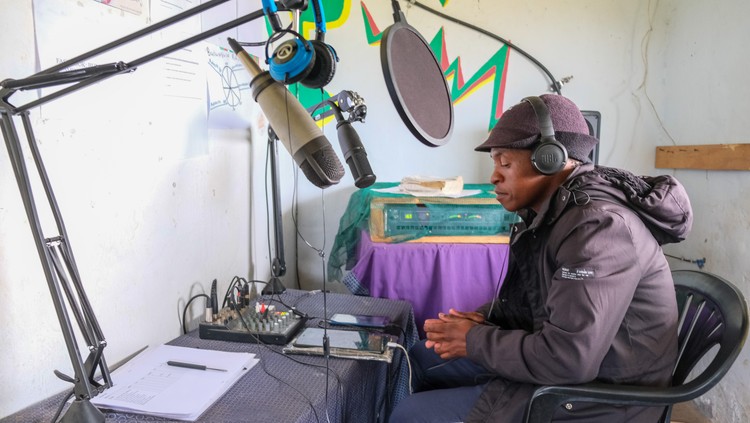 Mzoliseni Sibongwana is a presenter at Bulungula Community Radio, which broadcasts to 78 villages. Photo: Daniel Steyn

Lihle Mbikwana is the Vibrant Village programme manager for Bulungula Incubator. He first became involved with the Bulungula Incubator in 2018, as a facilitator for the iiTablet Tshomiz programme, an e-learning project for school learners in the area.

In his current role, he oversees a range of projects and activities, particularly for young people, as part of the Bulungula Incubator’s aim to enhance social cohesion. These include soccer and netball tournaments, talent shows, and the community radio station.

He says he nearly dropped out of school and is saddened to see other young people drop out because they don’t think education can help them. “I think all the young people have the dream to leave the village. They want to be seasonal farm workers in the Western Cape. Because they have seen their brothers do it and come back with fancy clothes, phones, and money to buy booze. You don’t need matric to work on the farms,” Mbikwana says.

He says when he came back to the village after high school, he found that writing rap songs was a form of therapy for him. He started encouraging other young people in the village to write songs too.

He says at first community members told him: “You are turning our kids into gangsters.”

“But then after they see the content and the way I teach them to write songs, now they understand,” Mbikwana says.

Bulungula College, an independent high school offering grades 10-12 and a Job Skills and Entrepreneurship Programme, along with the community radio and the other Vibrant Village projects, are “bringing light” into the village, he says. The installation of electricity in the village, which is currently underway, will encourage young people to stay, says Mbikwana.

At the moment the Bulungula Incubator depends on donations to continue its work and to pay salaries but is working towards becoming sustainable. A nursery sells seedlings to local residents, enabling them to grow food to eat and sell. The Job Skills and Entrepreneurship Program provides training in entrepreneurship and support for people starting their own businesses. 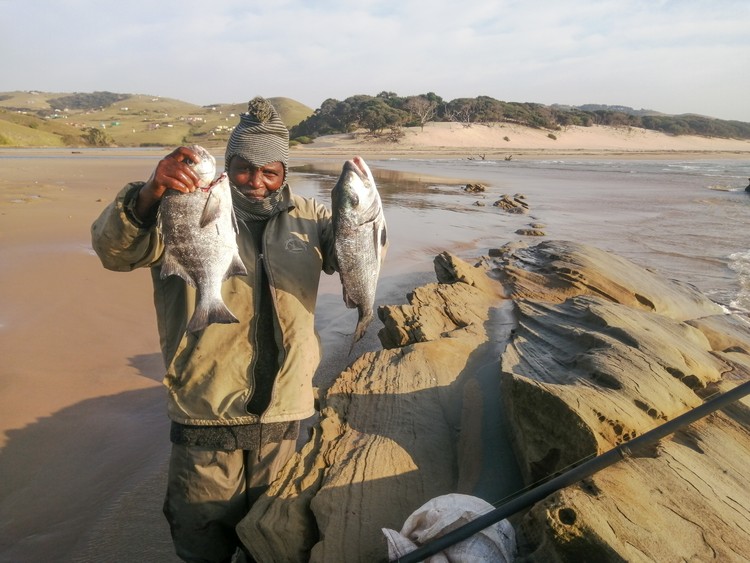 Community leader Timothy Dodwana receives the monthly old-age grant but says he finds it challenging to make ends meet. He says selling fresh vegetables from his garden to Bulungula Lodge has helped him make a meaningful amount of extra cash.

His wife, Nolisile, participated in the Bulungula Incubator’s agriculture course and earned a farming stipend to start a sustainable venture, growing and selling produce. She is also a seamstress, often hired by the Bulungula Incubator to make items for events. Dodwana also sells chicken meat and freshly-caught fish to locals in the community. 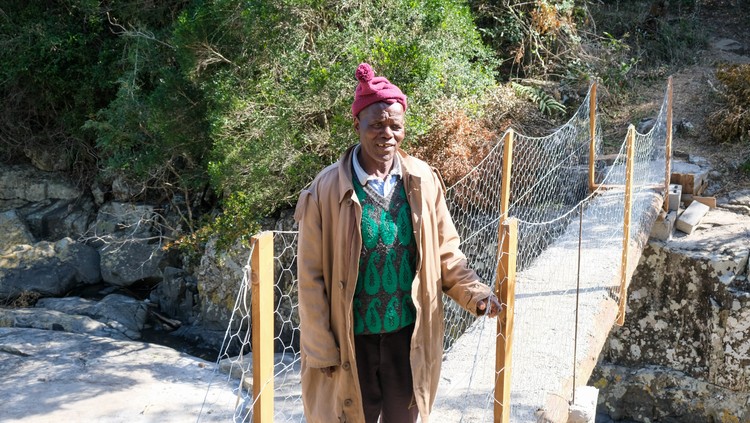 Maduna Mjongwana stands by a bridge he built with a few other elderly men from the community, to enable learners to cross the river to school safely. Photo: Mkhuseli Sizani

Maduna Mjongwana, an elder in the community, has been instrumental in the work of the Bulungula Incubator. He donated the land on which the Bulungula College was built. He is also a member of the Komkhulu (the traditional council where decisions affecting the community are made) and he is in charge of the demarcation of land in the community.

“When Dave [Martin] first came here, we did not trust him. We thought this mlungu [white man] was here to steal our land. But we have seen the work he has done here, and now we trust him. Now he is also a member of the Komkhulu. This has helped us open up our arms to newcomers who come here to do good work,” he told GroundUp.

Mjongwana proudly showed GroundUp a footbridge, built by a group of old men from the community and Martin, which is used by school children crossing the Xorana River every day. Before the footbridge was built, heavy rains would make the river unsafe to cross.

The bridge was built using treated wooden poles left behind by the contractors installing electricity. The whole project cost about R2,000 in cement and generator fuel. If the municipality had done this, it would have cost a few million rands and involved a long tender process. With municipal budgets getting smaller every year, and infrastructure demands increasing, there was no realistic prospect of a bridge being built by the municipality.

“As a community, we took matters into our own hands,” Mjongwana said. 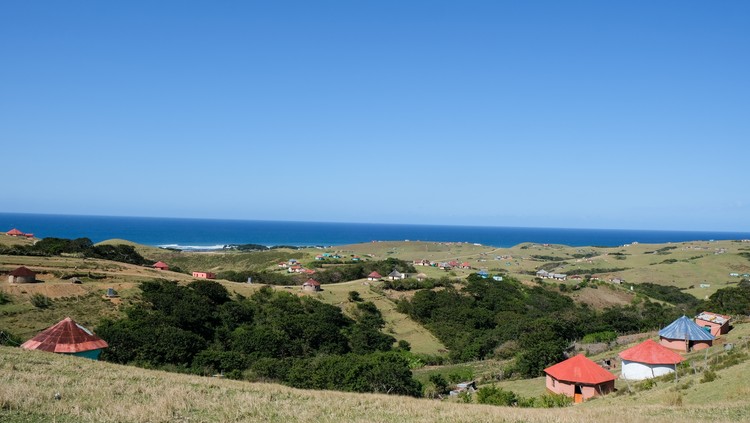 The Bulungula Lodge is based in Nqileni Village, on the Wild Coast. Photo: Daniel Steyn

The former title of Bulungula Incubator founder Rejanne Woodroffe has been added.

Next:  City of Cape Town and immigrant shop owners meet to resolve tensions