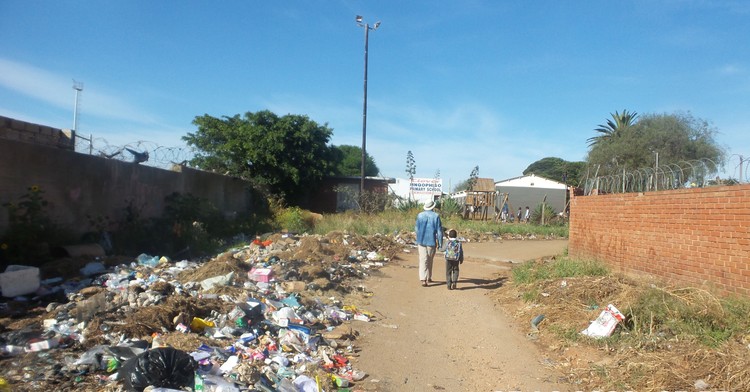 A parent takes a child to school past the illegal dump which has not been cleared since March. Photo: Joseph Chirume

Rotting garbage has piled up at the gates of Mnqophiso primary school in Zwide, Gqeberha.

School principal Luvuyo Booi and school governing board chairman, Vuyo Moss say they have tried to discourage residents from dumping outside the school, but without success.

“We are cleaning the school yard to ensure we have a healthy environment, but the challenge is outside, close to the main gate, where people dump their garbage. The entire street that leads to the school is littered with rotting garbage,” said Booi. “If the school had money, we would fence off the area and plant trees.”

Some residents say they will continue dumping on the site until the Nelson Mandela Bay Municipality provides them with a skip bin or a dumping site in the area. They say they have been requesting this for many years.

Municipal spokesperson Mamela Ndamase said refuse was collected in the area every Wednesday. But the site had been cleared in March, said Ndamase. “Dump sites are cleared but a few days later the situation arises again,” she said.

“The only solution is for the municipality to provide us with a dumping site. Until that happens, residents will continue dumping there because it is the only open place in this area,” said one resident who did not want to be named. The resident said the issue had been raised several times during Integrated Development Plan meetings.

Ndamase said there was a draft plan to develop new drop-off sites and some possible sites had been identified.

Due to a limited budget, she said, “the amount of resources allocated for each depot is not sufficient to clear all the illegal dumping sites”.

She did not say why the rubbish outside Mnqophiso primary school had not been cleared since March.

Next:  Xhora Mouth in the Eastern Cape is starting to thrive