The City of Ekurhuleni only deals with the contractor, not its employees, says City spokesperson 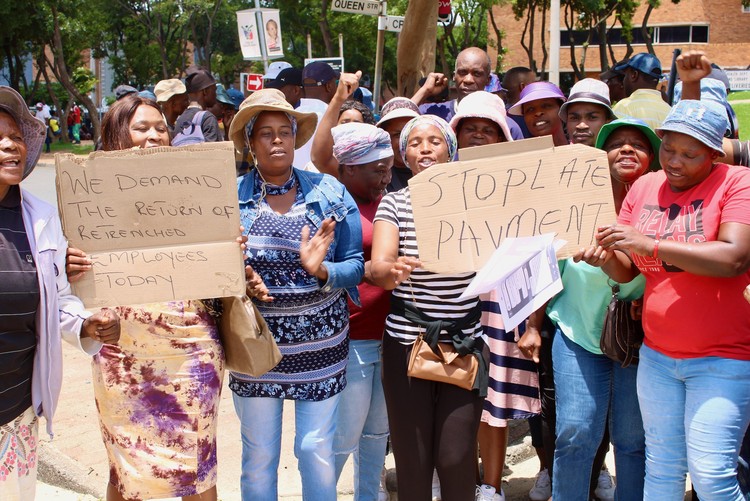 Over 100 security staff and cleaners working for companies contracted to the City of Ekurhuleni protested outside the Germiston Municipal offices on Wednesday. Photo: Kimberly Mutandiro

On Wednesday, over 100 security staff and cleaners working for companies contracted to the City of Ekurhuleni protested outside the Germiston Municipal offices. The protesters said they represent 3,000 workers who have not been paid for two to three months, are routinely paid late, or have been retrenched six months ago but never paid out.

They were demanding to be directly employed by the City.

Mayoral Committee Member for Finance Fanyana Nkosi addressed the workers and promised to resolve the issue with the companies.

Protest convenor Thembi Ntombela, who is a security officer from Primrose, said, “Our companies tell us that the municipality owes them a lot of money. When we come to the municipality, it tells us that it does not know us.”

“The municipality’s full time staff is paid, while us workers from contractors are overlooked. It’s high time we are taken seriously.”

“Between the municipality and our companies, we do not know who is lying,” said Pontso Mohago.

Among the protesters were former street cleaners from Falaz Cleaning Company who said they had not paid for six months.

The protesters said they would keep coming to the municipal offices until they got answers.

The City only deals with the contracting company not its employees, he said.

Next:  This judge has not delivered his judgment after ten years. No action has been taken against him