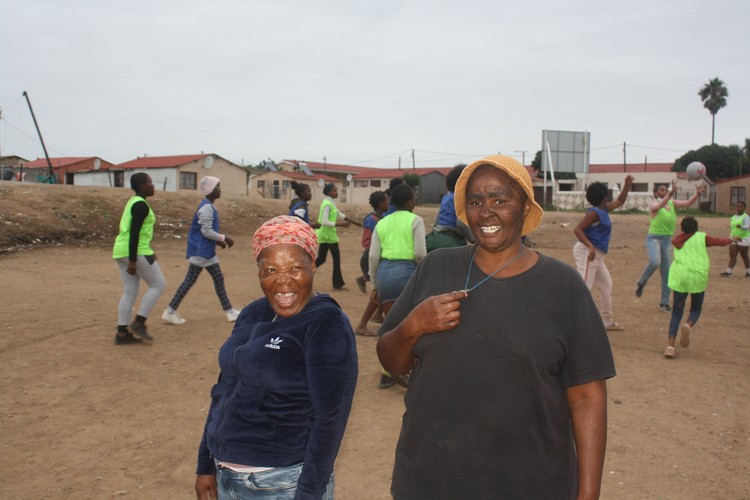 Ntomboxolo Twalingca (left) and Mandisa Ncamiso (right) spent a month cleaning piles of rubbish from this field in KwaNobuhle township in Kariega so they could start a netball club for teenage girls from the community. Photo: Thamsanqa Mbovane

Two unemployed women from KwaNobuhle township in Kariega spent a month transforming vacant land littered with piles of rubbish into a neat netball field for young girls from the community.

Ntomboxolo Twalingca and Mandisa Ncamiso said the unused space had become an illegal dump site in ward 47 due to poor refuse collection across the township.

In February, we reported that only 11 of 36 Nelson Mandela Bay Municipality refuse trucks are operational. The rest have been in repairs since January, causing major waste management issues across the metro.

Ncamiso said they wanted to start a project to keep teenage girls from the community occupied after school. “I decided to approach Fearnot Football Club to form a netball club. We did not have money to establish a new club, so we pleaded with Fearnot to allow us to include girls under their umbrella and they welcomed the idea.”

She said she started clearing the field with Twalingca in February. “It was hard to clean the space because every time the teens played, we had to stop people pushing wheelie bins from dumping their rubbish,” she said.

Twalingca said: “We used spades, pitchforks and other tools until our hands went numb. We both love sport and we were willing to remove even dead dogs.”

On Thursday afternoon, the sound of Ncamiso blowing a whistle echoed on the field as coach during a match with their newly-formed netball team of girls aged ten to 17.

The women said they are now looking for donations so they can buy proper netball equipment and uniforms for the girls.

When asked about the women’s project, municipal spokesman Mthubanzi Mniki said: “These initiatives go with our plans of changing illegal dumping sites into children’s playing parks, outdoor gyms and inclusive sport such as netball.”

Next:  City of Cape Town stops Brass Bell restaurant from building on beach