Commuters, vendors and taxi drivers complain about the smell 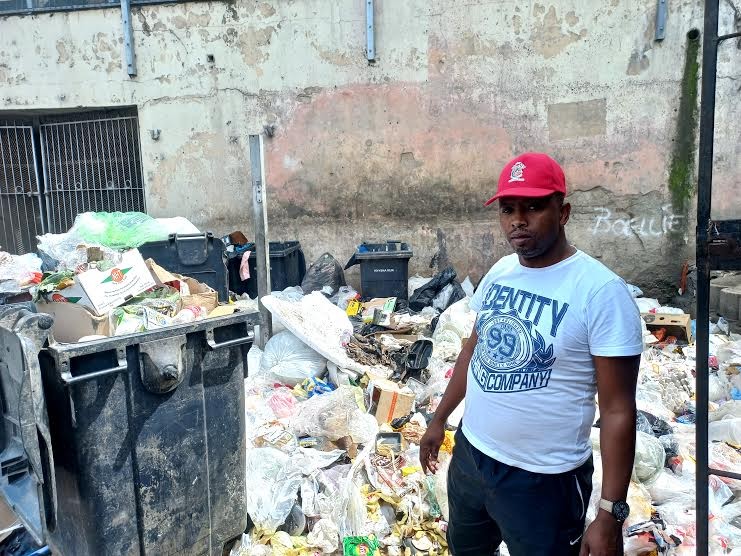 Taxi association chairman Mandla Khololo says the rubbish piles up at the taxi rank and the toilets are often closed. People relieve themselves behind the toilet block and the smell is very bad. Photo: Siphokazi Mnyobe

About 6,000 people use the Knysna Taxi Rank daily, according to taxi drivers. But the 12 toilets at the rank are often closed and commuters relieve themselves behind the toilet block. The municipality blames the situation on loadshedding.

Vendors say the bad smell from behind the toilets is killing their business.

Municipal spokesperson Nwabisa Pondoyi says the toilets are closed during loadshedding. “The public toilets’ water pumps in the central area depend on electricity to function,” she says.

“To mitigate the challenges of loadshedding, staff members from the solid waste department cut water for flushing purposes.”

But taxi drivers and commuters say loadshedding is not the only problem. The toilets often do not function outside loadshedding either, they say.

Chairman of Knysna Taxi association Mandla Khololo said the rank served seven routes in and around the town and was used by 6,000 people daily. He said there had been numerous meetings about the toilets with Knysna Municipality officials but the problem remained. He said rubbish is not collected at the rank.

“The smell comes very strongly to our office because these toilets are close to our door, and the waste bin is always full. We have engaged the municipality about this and nothing is being done,” said Khololo.

Kholiswa Nobheja, who has been selling vetkoek there since 2007, says the area is dirtier than when she started. She pays trading fees of R100 a month to the municipality. Nobheja says not only are the toilets dirty but waste is not collected on weekends.

“We are tired of complaining to the municipality, we have realised we are not important. At our last engagement a month ago with municipal officials, the municipality said it didn’t have the budget to renovate the area.”

She said when the vendors and commuters leave the area at night, homeless people move in behind their stalls and make fires and use the area to relieve themselves. “The homeless sleep behind our food stalls. There’s nothing we can do. Even law enforcement is not doing anything,” said Nobheja .

She said vendors had asked the municipality to employ Expanded Public Works Programme workers to collect waste and keep the area clean, using cleaning products to reduce the smell.

“None of the things we asked them have been considered. Instead they take our money every month and do nothing to assist us ” said Nobheja

Phathiwe Konto, who sells sweets and cigarettes outside Shoprite in the taxi rank area, says her stall is behind the toilets and she is losing business. Konto says she used to make up to R400 a day but that is down to R50 or R100.

Ward Councillor Peter Bester said the vendors and the taxi association should take better care of the area. He said the taxi drivers refuse to remove their taxis when refuse trucks come to collect refuse and some vendors throw waste on the streets. But Khololo said taxi drivers had never blocked trucks.

Asked about refuse collection at weekends, Pondoyi said only that refuse was “collected according to the normal schedule”. She said vendors did not apply good waste management, though educational material and wheelie bins had been supplied.

Next:  More delays in case of 22 cops accused of murdering Regan Naidoo in 2018

Previous:  Learners with disabilities must get a place in school