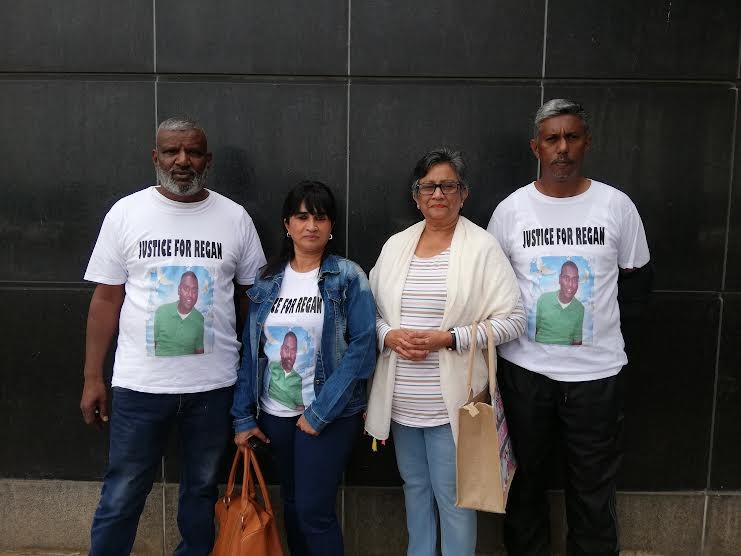 Regan Naidoo’s father, Timothy, his aunts Ruby Mahalingan and Premmie Pillay, and his uncle Jeffery Mahalingan at the court where 22 police officers have been charged with murder. Photo: Benita Enoch

The pre-trial hearing of the 22 police officers accused of murdering Regan Naidoo in 2018 was postponed to 27 January 2023 at the Durban Magistrate’s Court on Thursday.

Thirty-two-year-old Regan Naidoo was found unresponsive in a cell at Chatsworth police station on 29 August 2018. He had been arrested the night before, on suspicion of having a firearm used in an unrelated crime. Twenty-two police officers were arrested and appeared in court on 13 October.

On Thursday, state prosecutor Surekha Marimuthu presented particulars of the accused requested by the defence at the previous hearing.

Attorney Carl van der Merwe stated that the defence would object to trial and give the State notice of this today. He did not give further information in court. The objection would potentially be argued on 27 January 2023 when the case resumes. Magistrate Hein Visagie granted the postponement.

The police officers are accused of murder, attempted murder, torture, kidnapping and defeating the ends of justice. They were all in court on Thursday, some with the support of their family.

The State says that the police officers assaulted Naidoo and that an autopsy report proves this.

The case is still in its pre-trial phase. Pre-trial hearings are set up to narrow down issues, particularly in cases that are expected to have lengthy trials.

All the accused are out on bail of R3,000 each. One of them, police officer Riyadh Adams, has a prior conviction of assault.

Speaking outside court on Thursday, Naidoo’s family said they were disappointed at yet another delay. Naidoo’s aunt Premmie Pillay told GroundUp that seeing the accused and wanting justice but hearing of yet another postponement was traumatising. She said that was why Naidoo’s mother did not come to court. “She can’t bear to see all these delays. It just causes too much pain. Maybe she will come when the trial starts.”

Naidoo’s father Timothy said his son’s children miss their father. Naidoo’s daughter Atarah was six years old and his wife was pregnant with their second child when Naidoo died four years ago.

“We are in counselling for the trauma of coming to court for all these years and not even seeing a trial date being set. We just want justice. My son was beaten up. He was not a known person in the community that police had to beat up to get information from him. If he knew something, he would have told them. But he didn’t, and he was not involved in any shooting,” said Naidoo’s father.

Next:  Waiting for the scrapheap: hundreds of Shosholoza Meyl’s rusted carriages to be scrapped and sold