The Mamelodi hostel where “Emzini Wezinsizwa” was filmed is a mess

Site of hit 1990s SABC comedy series has no electricity 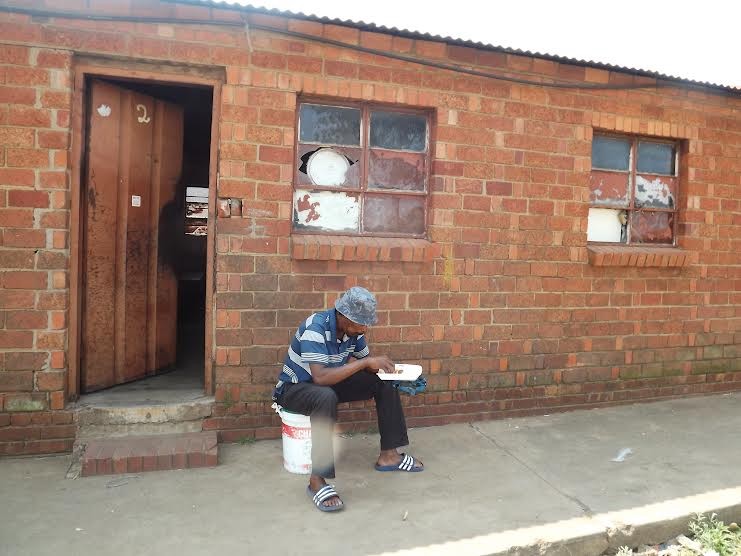 Sibonelo Fakude eats takeaway food outside his room at the Mamelodi Hostel. There is no electricity for cooking. Photo: Warren Mabona

The Mamelodi hostel which was the site of the hit SABC1 comedy series Emzini Wezinsizwa, is a mess, and the City of Tshwane has cut off electricity.

The hostel became popular in the mid-1990s when the SABC1 Zulu comedy, titled Emzini Wezinsizwa, was filmed in one of its rooms. The comedy featured a number of seasoned actors including Jerry Phele and Vusi Thanda.

Hostel resident and committee leader of Block E, Ephraim Kanyane, told GroundUp that the City had cut off electricity supply to the hostel in 2000 for no apparent reason. He said doors are broken, some of the toilets are broken and do not flush, and men, women and children have to share toilets.

“I have been staying in this hostel since 1998. It became very popular when Emzini Wezinsizwa was filmed here. But today, we cook with primus stoves and over an open fire.”

“This hostel was built by the City of Tshwane for us, poor people, and we don’t pay rent but we need electricity and other basic services.”

Kanyane said officials from the City had promised residents houses and basic services several times but the promises had not been kept. “We are asking the municipality to restore electric power and fix the toilets while we are waiting,” he said.

Kanyane and another resident, Ernest Mahlangu, showed GroundUp a room that they said had been used to shoot episodes of Emzini Wezinsizwa, which means “home of men”. The room is dark, with broken windows and no door handle.

Outside two cows were eating food from a refuse bin. Kanyane said goats and dogs often stray onto the premises to look for food because there is no proper fencing. 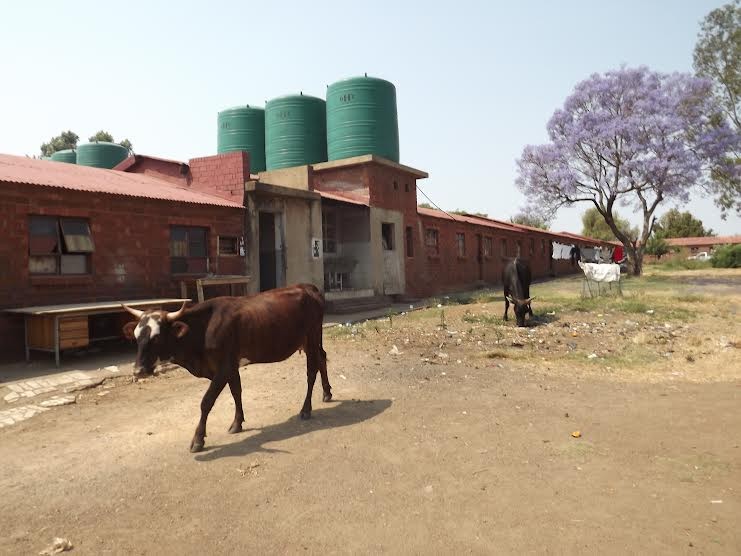 Animals wander through the hostel grounds and sometimes eat from the refuse bins. Photo: Warren Mabona

Mahlangu told GroundUp that he came to Mamelodi from Vezubuhle Village in Mpumalanga in January this year to look for a job. He said he was grateful to be able to stay for free but appealed to the City to restore power supply.

Resident Sibonelo Fakude from Elukwatini in Mpumalanga said he moved there in 2018. “I work as a painter but I decided to stay in this hostel because I could not afford to rent a room. The government must bring back electric power so that we can cook with electric stoves.”

Asked about the power cut, spokesperson for the City of Tshwane Lindela Mashego said only that the hostel infrastructure is old and the issue will be addressed through what he called the Urban Development Framework. He said in the 2019-2020 financial year, the City of Tshwane had replaced roofing, glass windows and doors in old hostels.

According to Mashego, a fence would be erected to prevent domestic animals from walking into the hostel’s premises.

Next:  In it to win it – Joe Slovo learners head to world robotics championship

Previous:  Nurses back at work at Gqeberha clinics