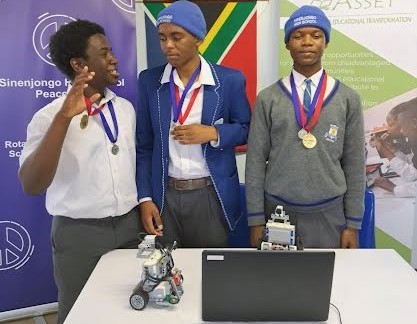 A robot designed, created, and programmed by a group of grade 11 learners at Sinenjongo High in Joe Slovo Park, Milnerton, will be entered into the 2022 World Robot Olympiad in the RoboSports category.

Now the “Sinenjongo rockwell boyz” as the team is called, will represent South Africa at the international competition in Dortmund in Germany from 15 to 17 November.

“Robo47” is called after the AK47 assault rifle, “cause we are always going to make a killing especially when shooting balls against our opponent robot”, said 17-year-old team member Elihle Zenzile, who commutes to school from Witsand township near Atlantis.

Maqubela said the robot had to be programmed to sense a ball, pick it up and throw it to the opponent’s side. “Believe me, that is no mean feat,” she said.

The rules are that the team with the most balls on the opponent’s side at the end of two minutes, wins the round.

She said robotics was one of the activities ASSET had identified as necessary for employment.

Maqubela said that learners are taught how to build robots from scratch. “They have to be committed and work hard both at the club and at school as their performance is monitored.”

Team member Pracahzel Kimbini, 18, says ASSET introduced them to robotics at the school.

“I really got to learn about new experiences. I didn’t understand how programming worked,” said Kimbini. “In the 21st century most things are robotic stuff … robotics gives a better chance of getting job opportunities,” he said.

Zenzile said he was excited to travel to Germany, as it would be his first trip overseas.

“To represent the country and our school, I feel very excited, almost can’t believe it,” he said.

The team has been training with teams from Parklands College and has been coached by Eric Hodana, who teaches Robotics at Parklands College. Hodana said the winning Sinenjongo robot had now been upgraded “to a better one” which will represent the country in Germany.

Rockwell Automation sponsored the team for both the national and the international competition.

Sinenjongo High principal Khuselwa Nopote praised her learners for their hard work, dedication, and drive. “They have proven to us that nothing can stand in the way of a black child with a dream. Them going to Germany and lifting our flag high brings us pure joy because we trust that they will come home victorious with or without the trophy. We as a school are very proud of the boys’ achievements,” said Nopote.

She said that her school advocates for excellent results in whatever they do. “Our learners know that they should excel in all aspects of their lives be it academic, extracurricular or sports,” she says.

Maqubela said ASSET was “honoured” to be able to have a positive impact on the learners’ lives.

“We hope they will go on and become a success in life and come back and plough back into their communities for those that come behind them. And I hope they are an inspiration to the rest of the community.”

This article was amended to include further information about Parklands College and Rockwell Automation.

Next:  “This place is full of rats” says homeless man from District Six

Previous:  The Mamelodi hostel where “Emzini Wezinsizwa” was filmed is a mess

This is such an awesome story. Well done to a well-deserved team of young robotics fundis and future leaders. May you attract well-deserved attention and may you all go far in your future endeavours. Well done!