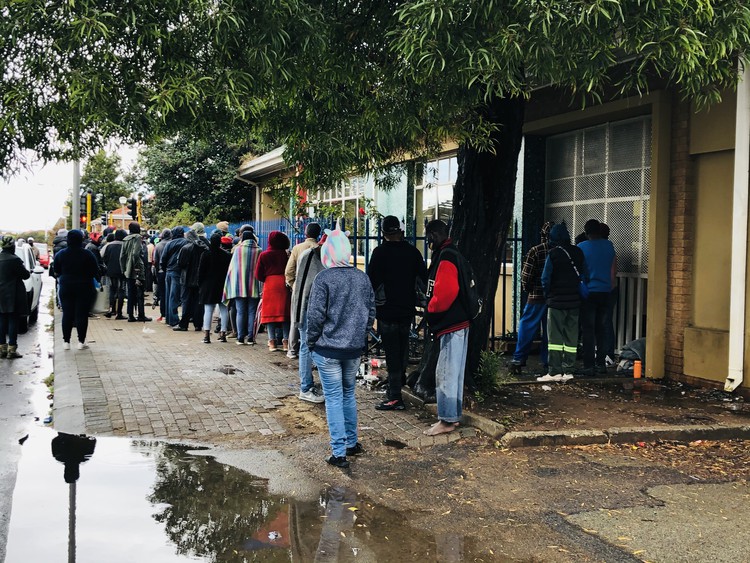 A queue for social grants outside the Post Office in Nigel in 2021. The Presidency and National Treasury have made proposals about the replacement of the Social Relief of Distress grant. Archive photo; Kimberly Mutandiro

Trade union federations have rejected proposals by the National Treasury and the Presidency for alternative grants to replace the Social Relief of Distress (SRD) grant.

The proposals, dated July 2022 by the Presidency and August 2022 by the National Treasury, include a targeted job-seeker grant and a caregiver grant to replace the R350-a-month SRD grant. An untargeted grant, such as a universal Basic Income Grant, is rejected as being too expensive.

In a statement, the South Africa Federation of Trade Unions (SAFTU) dismissed the proposals. The union said as many as 62% of current beneficiaries of the SRD grant would be excluded from the proposed job-seekers grant.

“Government will not be able to absolutely and with certainty determine all those who ‘deserve’ this grant. It will be difficult to build a database for all the job seekers, and people will have to show they have sought work. In other words, this criterion will be discriminatory and exclusionary. It will overwhelmingly exclude those who did not apply for the government employment programmes, but ‘deserve’ the grant because of unemployment and poverty. Most importantly, the group of 4.6 million current SRD grant beneficiaries who are regarded as too poor and marginalised to seek work, will not qualify for the grant; nor will the group of 1.9 million ‘less poor’ beneficiaries, because they are regarded as better off. So 62% of current SRD beneficiaries would be excluded from the job seekers grant.”

Instead, SAFTU said, a Basic Income Grant of R1,500 a month should be introduced progressively. “It is our belief that in turn, BIG will have positive multiplier effects in the economy by boosting demand and production, whilst relieving poverty among the unemployed.”

The Basic Income Grant should be part of a R1-trillion stimulus package, SAFTU said, which would include increasing the public sector wage bill and filling vacancies, as well as job creation drives.

The Federation of Unions of South Africa (FEDUSA) said it was in favour of a Basic Income Grant which could be increased over time. “In principle FEDUSA is in support of a universal Basic Income Grant to alleviate poverty and starvation. Such an intervention must take into consideration the current budget requirements and can be increased incrementally over a period.”

“FEDUSA is not in support of a household grant if it will not adequately address immediate poverty alleviation programmes amongst poor and vulnerable households,” the Federation said.

The Congress of South African Trade Unions (COSATU) said it had long called for a basic income grant. “We are the most unequal society in the world. We have rising levels of poverty. People struggle to find jobs in an economy with [high unemployment]. We don’t have a comprehensive social security system. The Unemployment Fund plays a key but limited role. Critics say we can’t afford a BIG. We think that we can’t afford not to have a BIG.”

Next:  This project has transformed education in a remote part of the Eastern Cape