They were told staff were having a party. GroundUp was told the same thing but the Western Cape SASSA spokesperson has denied this 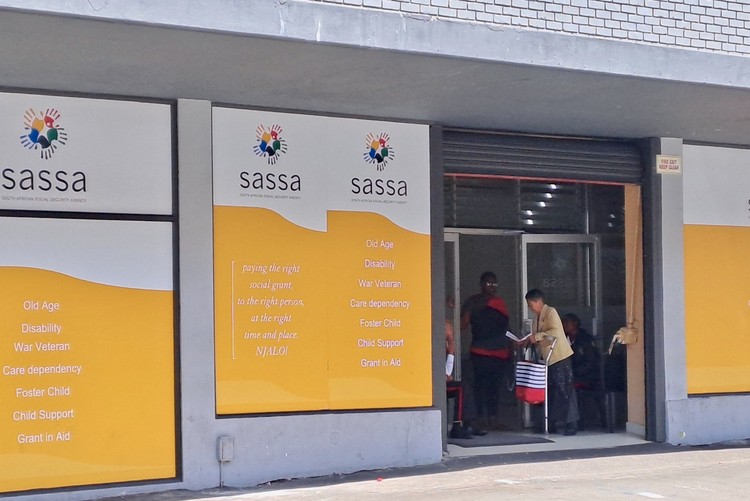 A beneficiary at the doors of the SASSA office in Wynberg, Cape Town on 9 December. She was told to return on Monday because staff were having a party. Photo: Liezl Human

Scores of social grant beneficiaries were turned away at the South African Social Security Agency (SASSA) office in Wynberg, Cape Town, on the morning of 9 December.

GroundUp was alerted by a concerned reader who witnessed SASSA recipients, who had been queuing outside the office as early as 5am, being told by security guards at 8am to return on another day because the staff were having a party.

We went to the Wynberg office at 10am and security personnel at the door confirmed that staff were having an end-of-the-year function. We were also told to come back on Monday, 12 December.

SASSA is denying that this was the case and told GroundUp that operations were ongoing on Friday.

One of the beneficiaries who had been queuing since 6am is Robyn Rorke. She was at the SASSA office to make an appointment for the renewal of her temporary disability grant.

“They wouldn’t let anyone in, wouldn’t take any queries, or answer any questions,” says Rorke. She says she felt “helpless”. Rorke said staff should have put up a notice explaining that they would not be assisting clients.

We sent questions to SASSA Western Cape on Friday asking about the office closure, to which spokesperson Shivani Wahab said, “the office [was] certainly not closed due to a year end function” and “operations are ongoing”.

She did not respond when we informed her that GroundUp’s reporter had also been turned away and told this was because of an end-of-year party.

Wahab also promised to confirm the total number of clients helped at the office by Monday but did not do so by the time of publication on Tuesday.

GroundUp has reported that beneficiaries have been struggling to draw their grant money from ATMs with the Postbank/SASSA gold card. Postbank and SASSA say this follows attacks on the network by criminals.