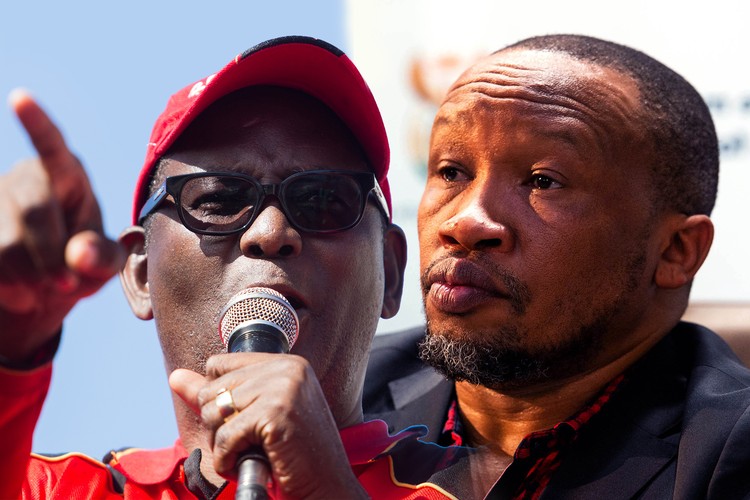 Zwelinzima Vavi and Irvin Jim are at odds with one another. Photo of Vavi (left): Ashraf Hendricks. Photo of Jim: SA government

As the South African Federation of Trade Unions (SAFTU) prepares for its national shutdown protest action on 24 August, the participation of its largest affiliate, the National Union of Metalworkers of South Africa (NUMSA), hangs in the balance.

NUMSA General Secretary Irvin Jim pulled the union out of attending the SAFTU special national executive committee meeting, being held on Tuesday, and took aim at SAFTU General Secretary Zwelinzima Vavi for what he perceives as interference in the union’s operations.

NUMSA is the largest union in the country and contributes about half of SAFTU’s 620,000 members.

On Tuesday, Jim sent a letter confirming that NUMSA would not be attending SAFTU’s meeting, because an agenda item would discuss the court challenge to NUMSA’s recent elections and NUMSA’s decision, subsequently overturned by the courts, to suspend its erstwhile second deputy president Ruth Ntlokotse.

Mac Chavalala, when he was SAFTU president, had attempted to suspend Vavi as SAFTU General Secretary in March this year. In May, Ntlokotse defeated Chavalala for the presidency. This drew the ire of Jim, who supported Chavalala. Chavalala was later elected as first deputy president of NUMSA in the disputed elections.

On Monday, a lawyers’ letter sent by NUMSA’s attorneys attempted to kibosh any discussion at SAFTU’s meeting about the legal tussles surrounding the recently interdicted NUMSA national congress. The letter claimed that since the court battle was underway “neither NUMSA, nor SAFTU, can in any way discuss the content of matters which are currently before the courts, since this would be against all legal principles”.

In response to the lawyers’ letter, Vavi implored Jim to review NUMSA’s decision not to attend, and said that since SAFTU itself was not party to the court cases, discussion of the matters was permissible.

There have been a series of increasingly tense exchanges between Jim and Vavi following NUMSA’s national congress.

On 4 August, Vavi wrote to Jim to request a meeting between SAFTU and NUMSA national office bearers. Vavi wrote that SAFTU is “extremely concerned about the developments before and after the congress” and that they “believe that an engagement with NUMSA has become a matter of life and death for the federation and its biggest affiliate”. Vavi noted that a previous request for a meeting, sent on 21 July, was not acknowledged or responded to by NUMSA.

On 5 August, Jim notified SAFTU’s national office bearers that it would not be participating in the federation’s working class summit, which was held that day to plan and prepare for the upcoming national shutdown. Jim claimed that it was too busy “defending its important watershed National Congress”, which he said was “under attack”.

Then on 11 August, Jim wrote to SAFTU’s leadership, claiming that Vavi was playing a “destructive political role … in fuelling and supporting what we regard as political instability … whose mission and task has been to destabilise NUMSA as an organisation, its unity and to liquidate its leadership”.

Jim goes on to list what he perceives as signs of Vavi’s interference with his leadership, claiming that Vavi has come out in support of “the nullification of NUMSA’s 11th National Congress outcomes, resolutions and leadership”.

Jim said that, “SAFTU has taken a decision to meet with suspended individuals who have committed acts of misconduct without meeting with NUMSA leadership which represent national structures and who took the decision to take disciplinary measures against them.”

The NUMSA officials were suspended in the run up to the national congress after they raised concerns about the state of the union’s investment company, in particular its subsidiary 3Sixty Life, and its relationship to national office bearers.

In March, GroundUp broke a series of stories about NUMSA and 3Sixty Life, which was placed under curatorship by the Prudential Authority after becoming insolvent.

SAFTU’s 24 August shutdown is directed against the rising cost of living, and austerity and privatisation measures by the national government. But NUMSA has indicated that it will not be providing any financial support for the protest action.

Despite NUMSA closing the purse strings, support for the shutdown is expanding beyond SAFTU. On Monday, the Congress of South African Trade Unions (COSATU) indicated that it will also be engaging in strike action on that day, possibly in collaboration with SAFTU, pending a meeting on Wednesday this week.

But on 11 August, Mbuso Ngubane, the newly-elected NUMSA deputy secretary general (pending the outcome of the Ntlokotse court challenge) issued a memo to its regions indicating that NUMSA would not contribute financially to SAFTU’s shutdown.

Ngubane claimed that NUMSA’s “financial position at the moment does not allow us to avail or approve budgets towards this important campaign of the federation”. In support of this, Ngubane cites the cost of retrenchments on reducing its monthly income, the costs of its regional and national congresses, and the legal costs following the challenge to its national congress. Ngubane also cites a need to budget for “possible” strike action in the motor sector.

GroundUp understands that NUMSA’s budget for strike action is held independently from its budgets for congresses and legal costs.

Nevertheless, Ngubane says that NUMSA will “encourage our members to partake in the campaign where possible without expecting financial support from head office”.

SAFTU spokesperson Trevor Shaku told GroundUp that he would not comment on matters related to SAFTU and NUMSA. However Shaku said that “NUMSA is going to participate in the Special NEC today”, and that NUMSA will participate in the upcoming national protest.

Shaku said that SAFTU was pleased that COSATU had accepted the federation’s invitation to join the national shutdown, and that Wednesday’s meeting of the federations would be to “discuss details of the action, and coordination”.

NUMSA spokesperson Phakamile Hlubi-Majola did not respond to GroundUp’s questions by time of publication.

Next:  Traders at the historic Salt River Market will be excluded from new City development