Activists demand mines develop and help the communities that host them 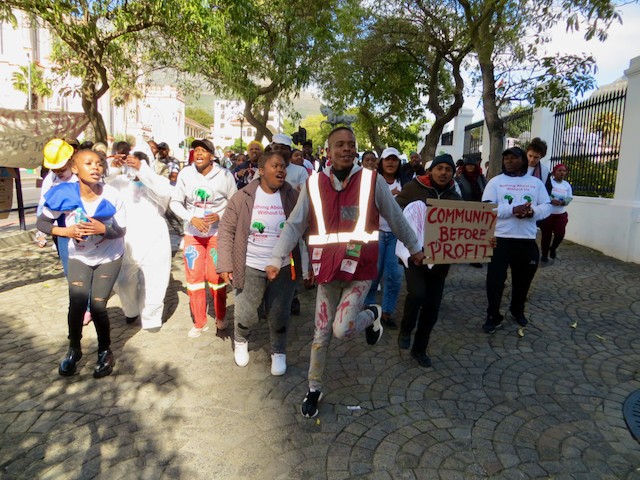 Under the banner of Mining Affected Communities United, about 100 activists picketed, sang and toyi-toyied outside Parliament on Tuesday, while they waited for officials to receive their memorandum. But no official came.

They want the Department of Mineral Resources to see to it that mining communities are meaningfully consulted, and that prior and informed consent is received for mining operations, said Meshack Mbangula, national co-ordinator of Mining Affected Communities United in Action (MACUA).

In a press release, MACUA and Women Affected by Mining United in Action (WAMUA) said, “In 2020, MACUA and WAMUA delivered 50,000 signatures of affected community members to Parliament … Throughout 2021, we have sent email after email, memorandum after memorandum”. But there has been no response from Parliament, the statement said.

“Mines must have continuous five-year plans to develop communities hosting them. The plans can include building clinics and schools,” said Mbangula.

“We need a permanent platform where we can continuously give reports to the Department of Mineral Resources about these problems and where we continuously hold mining companies accountable for mining related problems,” he said.

“We no longer use river water because it’s contaminated. I buy water from borehole owners for about R600 monthly.”

Mbangula said he had communicated with the chair of the parliamentary portfolio committee for mineral resources and energy, Sahlulele Luzipo, and they would meet on Friday to discuss MACUA’s grievances and demands.

Next:  SAFTU and NUMSA clash as shutdown looms