Refugees are camping outside the UN offices in Pretoria. Here’s why

Most want to be repatriated to a third country, but authorities say this is impossible 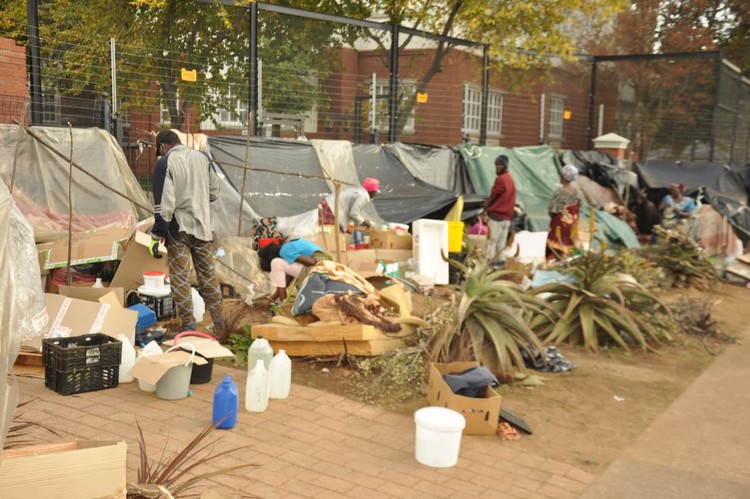 A group of refugees have been sleeping outside the Pretoria office of the United Nations High Commissioner for Refugees (UNHCR) for a week, hoping to be sent to another country. Photos: Kimberly Mutandiro

It is just before 5pm as the cold winter breeze starts to settle in. Refugee women and children outside the Pretoria office of the United Nations High Commissioner for Refugees (UNHCR) gather firewood to prepare for the night ahead. They have set up shelters made of plastic, cardboard and branches.

It has been over a week since they arrived at the UNHCR from the Lindela Repatriation Centre, where they had stayed for the past three years after demanding to be taken out of South Africa in 2019.

The refugees say that on 10 May the officials at Lindela told them their time was up and that they would be taken back to the UNHCR offices. This version of events was disputed by Home Affairs (see below).

Refugees in Cape Town were moved to camps at Wingfield and Bellville after similar protests. Forty-one of them, including leaders Aline Bukuru and Papy Sukami, were later sent home and 800 returned to communities in South Africa.

The group currently sleeping outside the UNHCR are among the Pretoria refugees who did not want to return to their homes in South Africa and insisted on being moved out of the country. One of them, Aline Mauwa, died at Lindela.

The group said living conditions in Lindela were poor. They say electricity was cut off so they had to bath in cold water and they were denied medical treatment at a clinic inside the centre.

The refugees say they will continue to sleep outside the UNHCR offices in spite of the cold. Most of them want to be taken to a country where they will be safe from xenophobia, they told GroundUp.

Kati Turia wears a shawl around her arms to try and hide the rash that has spread around her arms and back. But the dark marks on her hands are unmistakable. The rash developed while staying at Lindela, she says. Close to her is her nine-year-old son, who like the rest of the children in the group, has not been in school since 2019.

Turia says she was given three months to leave the country in 2015 by the Berea Home Affairs office. She was pregnant at the time. 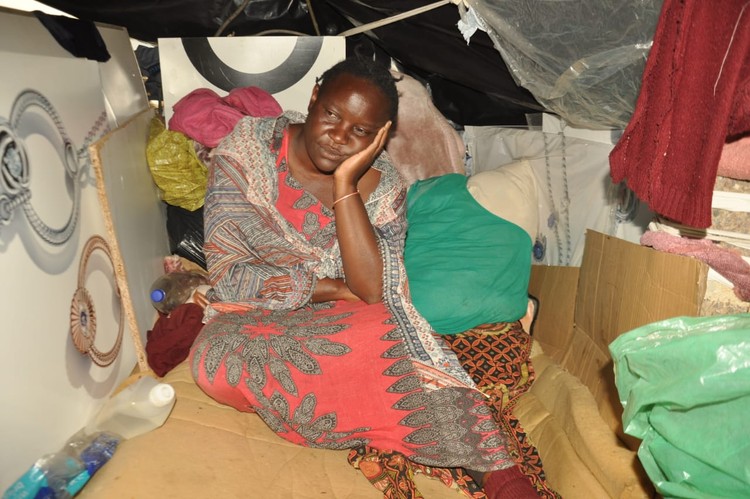 Kati Turia and her nine-year-old son from the DRC are among the refugee families staying outside the UNHCR.

During the same year she says there were xenophobic attacks and she was beaten up. But she could not go back to her home in South Kivu, in the Democratic Republic of Congo (DRC), due to fighting there. She suffered a miscarriage.

In 2019 her family was again attacked, she says. “Xenophobia starts in the government. Look at what is happening. Laws are being made to stop employment of foreigners. My children are traumatised because of the attacks which took place. We currently do not have documents because Home Affairs denied us,” she said.

Turia says she wants protection from UNHCR and to be taken to a country where she and her family will be welcomed. “Asking for protection is a crime because when we asked for it, we were taken to prison in Lindela. Protection to them means prison. The infants who went to Lindela with us in 2019 think that Lindela is our home, so they are asking to go back home to prison,” said Turia.

“We have endured enough xenophobia in this country, we want to be to be taken to safety.”

Lucombo Chese, also from the DRC, says she was attacked in 2008 and 2019 in inner-city Johannesburg. She says she and her children were beaten and called names for being of foreign origin. After the 2019 attacks she joined other refugees in protest at the UNHCR.

“At first my children did not know any difference, until they were called makwerekwere at school, over and over again. It was clear that this place was not for us. All we want is to be taken out of South Africa,” she said. 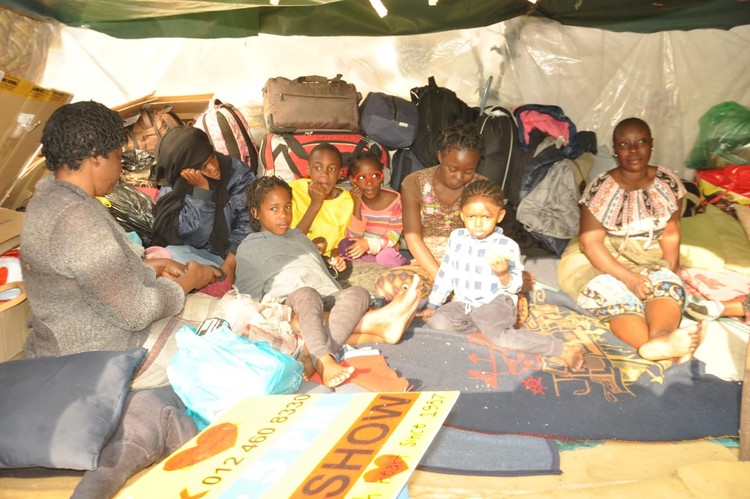 Some of the children and their mothers sleep in this makeshift shelter. The children have not gone to school since 2019.

Spokesperson at the UNHCR Buchizya Mseteka said the office had sent inspectors to Lindela while the group of refugees were sent there and had found nothing wrong with the way the refugees were living.

Mseteka said 40 people in the group had since been taken back to Lindela. “We are working with the Departments of Home Affairs and Social Development on a way forward. We have two options, to assist them in going back to their home countries or for them to go back to Lindela. At Lindela they are given three meals a day and have access to medical care,” he said.

Resettlement to other countries was not possible, Mseteka said.

Home Affairs spokesmen Siyabulela Qoza said: “In 2019, when the group was moved to Lindela — not arrested but moved there as a humanitarian gesture of providing them with shelter — there were 473 women and children. Since then 388 people have opted to be reintegrated into local communities and they were assisted to do so.”

Qoza said 85 people of the remaining Lindela group had asked to be driven to Sunnyside Police Station in Pretoria “where they would undertake integration into local communities” but instead rushed to the pavement outside the offices of the UNHCR in Brooklyn, put up tents and started their protest again.

Of the 85 people outside the UNHCR, 22 have since opted for voluntary repatriation to their countries and are being assisted to do so, said Qoza.

In response to claims of poor living conditions at Lindela, Qoza said it was “propaganda to pressure South Africa and the UNHCR to do the impossible by resettling people in a third country”.

Next:  GROUNDVIEW: How could a teacher guilty of sexual assault go on teaching for five years?