More than 150 people have been braving the weather for weeks 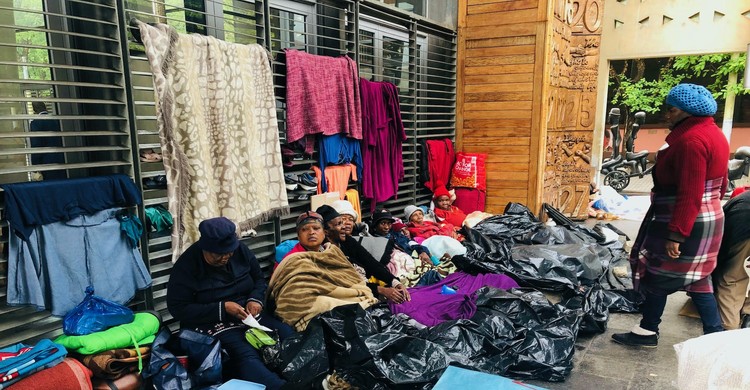 Dozens of people have been sleeping outside the Constitutional Court in Johannesburg demanding reparations for crimes committed against them during apartheid. Photo: Kimberly Mutandiro

Instead of sleeping in his own bed in Tembisa, 75-year-old Wellington Mbatha has endured cold rainy nights outside the Constitutional Court in Johannesburg for the past four weeks. He and dozens of others are protesting against what they see as a failure by the state to compensate them for injuries they suffered under apartheid.

More than 150 people have been sleeping outside the court since 18 October. They are members of the Galela Campaign and the Khulumani support group, which was set up to represent over 100,000 victims of apartheid crimes and their families.

Some sustained injuries in confrontations with apartheid police and say they still have bullets in their bodies. Others lost loved ones or were chased from their homes.

The Truth and Reconciliation Commission (TRC), set up in 1995 through the Promotion of National Unity and Reconciliation Act, was tasked with identifying and verifying victims of apartheid who should receive reparations. A list of victims of gross human rights violations was drawn up in 2003, and according to the Department of Justice, 17, 416 people received a once-off payment of R30,000.

But Mbatha and the other protesters want the reparation process to be opened up again.

They believe that the billion-rand Presidential Fund, established by the government for reparation payments through the TRC in 1995, is yet to be fully used.

They also want education support for their families, medical benefits for those who suffered long term injuries and housing benefits.

Mbatha says he was shot in the legs by police outside his home in Tembisa in 1991, and is still troubled by the wounds. He submitted an application to the TRC but it was rejected.

“My life has never been the same since I was shot. The government should pay us as a way of saying sorry for our apartheid sufferings,” he says. He says he would use the money to cover medical bills. 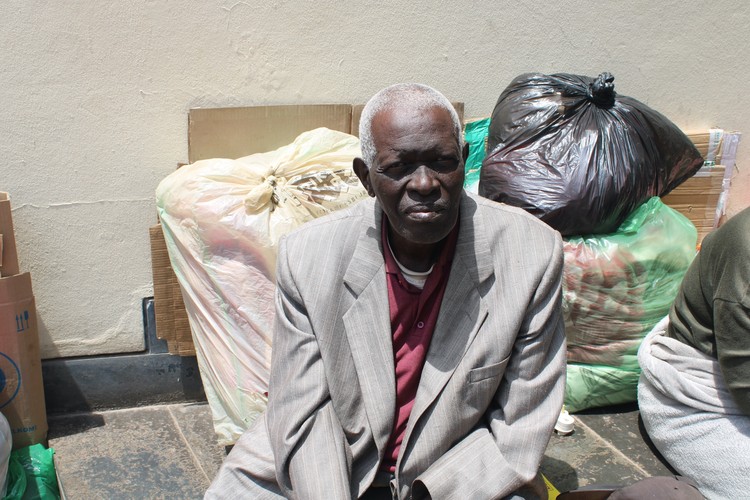 Wellington Mbatha says he still suffers from wounds in his legs inflicted by apartheid police in Tembisa. Photo: Kimberly Mutandiro

The protesters say they have had several meetings with the Department of Justice but are no closer to resolving their grievances.

Department of Justice spokesperson, Chrispin Phiri, said it was not possible to pay additional amounts to those who had already been paid.

He said the department acknowledged that some members of Khulumani might have been excluded from the list of eligible people compiled by the TRC and that some people on the TRC list might have been left out of the payment process. “The department views this process as finalised except for cases where TRC-identified victims who did not apply for final reparations wish to now submit their applications for payment of the once off R30,000 individual reparations,” Phiri said. “In this regard, the Department will receive their applications and process them accordingly.”

“We have asked for a list of individuals whom they believe to be eligible for reparations for us to verify them,” said Phiri.

Rosina Mushi, 66, from Matlala in Limpopo says her husband was killed by police, their house was burned down, and their livestock killed during apartheid. She did not get compensation.

“I want a R1-million payout, that is the only thing that can bring me peace,” she said.

Angeline Sithole from Katlehong says she suffers from mental illness after apartheid police beat her up. She wants to be paid R1.5-million.

Phiri acknowledged that approved victims were to receive medical benefits, education assistance, and housing assistance. Communities adversely affected by apartheid were to receive rehabilitation. He said the TRC Education Bursary Fund which was established to provide educational support families of victims of apartheid violence was currently benefiting 3,000 learners.

“The expectation of the individuals who are currently at the Constitutional Court is that the money set aside for reparations in the President’s Fund must be paid to them in cash, on their own terms, which is impossible,” said Phiri.

Judy Ann Seidman from Khulumani said a request had been sent for the president to address the victims but a response had not yet been received.

“We still demand that our president, the government and Minister of Justice must address our demands now, otherwise we will continue protesting,” said Seidman.