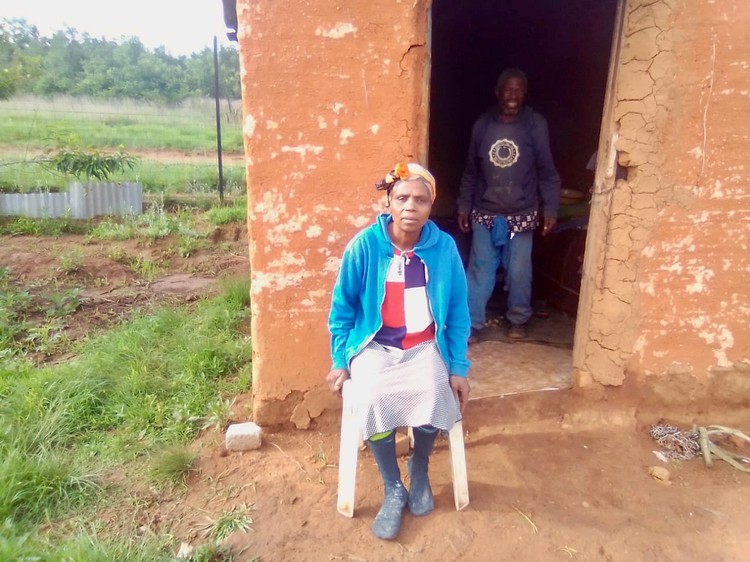 Makemiso Ramabitle is in severe pain after she fell down a mountain in the rural Eastern Cape. She was told she has to wait nearly six weeks before she can have an operation. Photo: Nombulelo Damba-Hendrik

A 51-year-old woman in the rural Eastern Cape, who is in severe pain after a fall, has been told she has to wait nearly six weeks before to be transferred to a hospital capable of performing the necessary surgery.

Makemiso Ramabitle was on her way home from a traditional ceremony in the village of Dititjerent, when she took a wrong turn. She found herself lost in steep mountain terrain.

“It was at night and there was fog. I only remember rolling from the mountain, hitting stones,” she says.

She had fallen down a rock face and ended up wedged in a crevice.

“Each time when I tried to stand, I would fall … I could not move my lower body. I slept there, helpless, thirsty and hungry,” she says.

“I thought I was going to die. I kept on praying to God to send at least one person in my direction. I was in so much pain,” says Ramabitle.

She lay there from Monday night, 17 October, until Thursday the 20th. She was found by a shepherd searching for cows. He went to call for help and men from her village of Mohosi, six kilometres away, came and rescued her.

“When we found her, she was in so much pain. She just asked for water,” says Ntambo Msuthwana, one of the men who found her.

Yet her ordeal was not over.

Msuthwana took her to Taylor Bequest hospital in Matatiele, 67km away. But the hospital has no orthopaedic surgeons for complicated fractions. X-rays showed her hip bone was cracked and a broken knee bone.

Ramabitle was discharged the same day. She was told she would be transferred to Nelson Mandela Academic Hospital in Mthatha for surgery, but this could only take place on 28 November, nearly six weeks later. The receptionist said they have to wait for beds to be available in Mthatha which serves several hospitals.

Ramabitle can hardly walk. She needs help to go to the toilet. She is in constant pain. She was given ten paracetamol tablets by the hospital.

“I don’t sleep at night because of the pain. It’s always cold here. I lay in bed most of the time. I can’t sit properly. My back is in so much pain and I don’t have pain killers. I rely on Grandpa [Headache Powders]. My neighbour buys them from the Somali shops,” says Ramabitle.

She shares a one-room mud house with her husband, Tsietsi. He is a shepherd and earns R1,500 a month. They owe the man who took her to hospital R1,000.

“At least he had mercy. He didn’t charge for a return trip, even though he waited for me,” she said.

There is a bakkie that serves as public transport to the hospital, leaving at 6am and returning at 4pm. Outside of these times, villagers have to hire private vehicles at R1,800 a return trip.

As the ambulance will leave Taylor Bequest for Nelson Mandela Academic Hospital at 2am, Ramabitle will have to wait at the hospital all day.

Eastern Cape Department of Health spokesperson Yonela Dekeda confirmed that Taylor Bequest Hospital in Matatiele does not have orthopaedic surgeon care. Dekeda did not clarify why there is such a long delay before the operation can be performed.

Previous:  Cape Town mother has to beg for money to buy nappies for her disabled son