Kariega by-election: “I voted without taking a bath. I was stinking!” 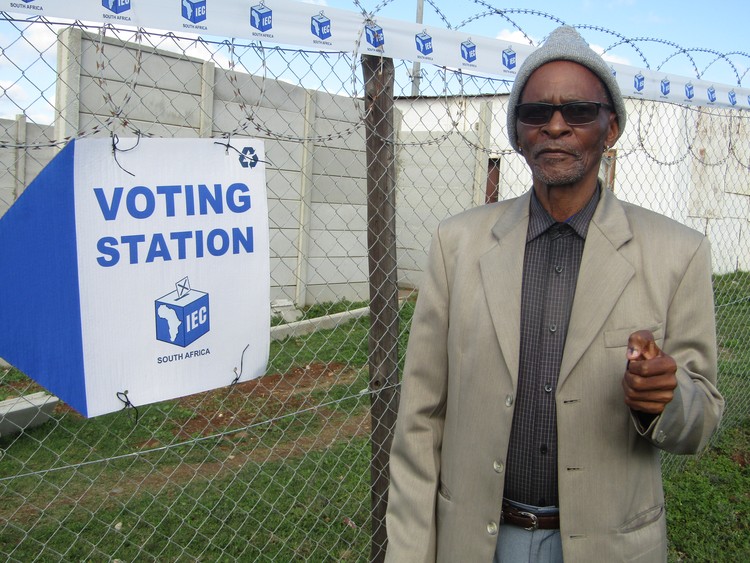 Columbus Mahlahla from Khayelitsha in Kariega (formerly Uitenhage) says he went to the polls in Ward 43 without having washed because there has been no water in his ward for two months. Photo: Thamsanqa Mbovane

Pensioners from Khayelitsha township in Kariega say they went to the polls on Wednesday “stinking” because they have been without water for two months.

Nelson Mandela Bay held its by-elections for Ward 43 following the death of councillor Andile Andries who was shot dead in May. This ward was contested by the ANC, EFF, UDM, United Front, ActionSA and Abantu Integrity Movement (AIM).

On Friday afternoon the IEC announced that Mandlakazi Mabuda was elected as Ward 43 Councillor. The ANC retained majority seats with 69.11%. Voter turnout was 28.31%.

“It was the first time I voted without taking a bath. I was stinking,” said 79-year-old Columbus Mahlahla.

Only he and his wife went to vote. “All my ten children didn’t vote. They were angry and said ‘no water, no vote’. They told me to refrain from voting too,” said Mahlahla. He said the voting station at the Methodist Church near his home was practically empty.

“I only have 20 litres of drinking water at my house. I depend on my children to collect water for us from a leaking pipe in the bush. They often remind me of the poor services we get here,” he said.

Ntombizine Zelani said a taxi was arranged to transport her and other voters to the Sikhothina voting district. She too had to vote without having bathed. “I didn’t wash myself because my tap is dry. My 19-year-old granddaughter told me ‘no water, no vote’. She showed me empty water bottles and said: ‘Grandma, you keep voting for people who don’t deliver any service, abstain.’”

“I would not have voted if they didn’t fetch me with the taxi,” she said.

By Friday morning, it was not clear which political party had come won the by-election.

IEC spokesperson Julie Stanworth said they were experiencing “technical challenges” with the system. But she said “we are assured” that they would be resolved shortly.

GroundUp has published many reports on protests and complaints by residents of Kariega over their water woes and fight for other services like electricity. In April, we reported that schools in the town had to close early because of the water outages. At the time, municipal spokesperson Mthubanzi Mniki blamed a six-year drought and high water usage for the shortages.

This article was updated at 15:50 to include the results of the by-elections.

Next:  Increased housing subsidy will result in more informal settlements

Previous:  Hundreds of families in inner-city Johannesburg may lose the only home they have known for years