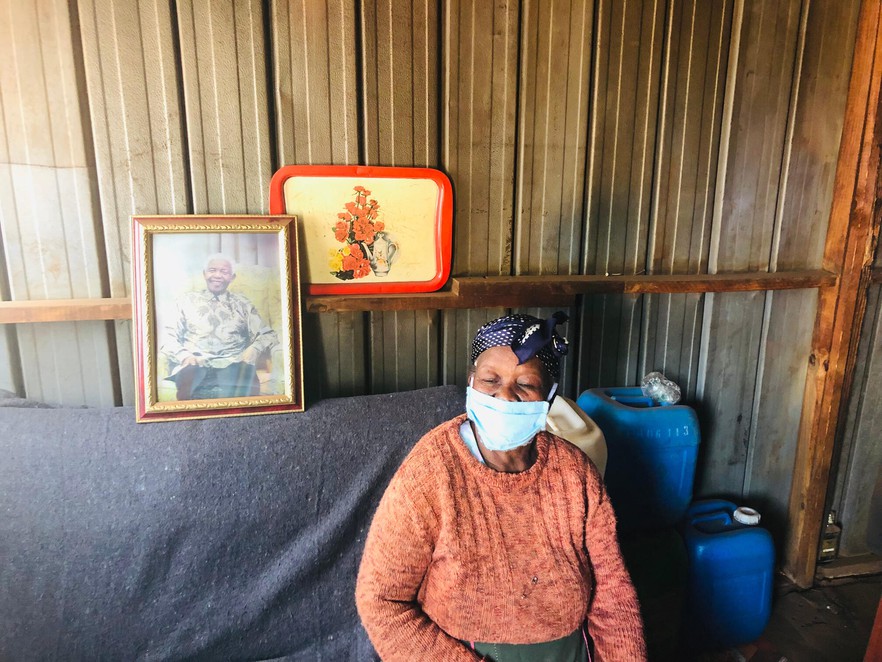 Christina Hlatswayo has been waiting for her promised house since she was moved to Lindelani 20 years ago. Photos: Kimberly Mutandiro

Twenty years after being forcibly removed to make way for an industrial development, families in the Lindelani Informal Settlement in Ekurhuleni are still waiting for the RDP homes and services they were promised.

In 2020 they believed their long wait was finally over, when the multimillion rand Alliance housing project in the area was announced. So far 258 houses have been completed, 1,381 houses are in progress and the project should be completed by June 2022, according to the Ekurhuleni municipality.

But when GroundUp visited the area recently, we discovered that the project had stalled and many of the families are still living in their shacks. In Alliance Extension 9, toilets have been installed on serviced stands - at a cost of R174 million according to the municipality - but have not been connected to the sewerage system. Most families rely on communal toilets. Some families get water from tankers and others from communal water tanks on the street. In Alliance Extension 1, where RDP houses have been built, the houses are in different states of completion and still have no electricity. Yet tens of millions of rands have been paid to companies to build houses and provide services in the area.

The contracts of two developers who were awarded tenders to build new homes in both projects were cancelled because of poor performance.

DA MP Mat Cuthbert lodged a complaint with the South African Human Rights Commission (SAHRC) in 2019 against the Ekurhuleni Municipality in connection with Lindelani. But instead of investigating, the SAHRC referred the matter to the municipality for “further handling”.

One of the companies whose contract was cancelled was NJR Projects, which trades as the G5 Group. It is linked to controversial tenderpreneur Edwin Sodi. Sodi is one of nine accused, along with suspended ANC secretary-general Ace Magashule and five companies, in a multimillion rand corruption case. Magashule and Sodi and the others have been charged with multiple financial crimes, including fraud, corruption, money laundering and contravening the Occupational Health and Safety Act, in respect of a R255 million project to eradicate asbestos roofing in the Free State. The Special Investigating Unit (SIU) swooped on Sodi in October last year in connection with the Free State case and seized luxury vehicles and properties worth millions of rands.

According to a report by the investigators for the Zondo Commission, Sodi has a 50% interest in NJR, “which assisted with emergency roof replacements in Gauteng at the end of 2013 for an amount of R70 million.” The investigators said NJR had received a total of R1 billion nationally.

NJR has also been linked to a R173 million contract to build temporary housing in Duncan Village in the Eastern Cape. The SIU is investigating contracts valued at R300 million, which were aimed at stopping the spread of Covid-19. Only 279 of the contracted 1,800 temporary shelters were ever built. 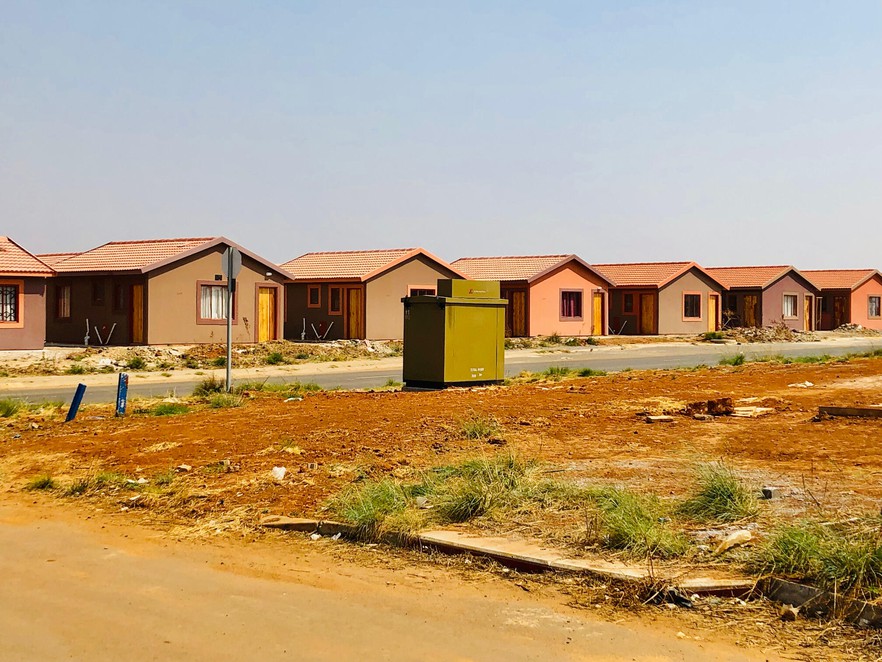 Some of the RDP houses that have been built in Alliance Extension One.

The vast informal settlement of Lindelani on the outskirts of Benoni in Gauteng’s East Rand has 15,000 residents according to the 2011 census, although the number has probably grown since then. The original residents of the settlement were moved there from another informal settlement in Apex around 1999, to make way for industrial development. The then Benoni Town Council undertook to provide houses and services for those who were moved. Since then more people have joined the list for housing.

Christina Hlatswayo, 74, was moved from Apex in 1999 and still lives in her shack in Lindelani. On the wall of the tiny two-roomed shack is a portrait of Nelson Mandela. She has been told that she does not qualify for a house in the Alliance project.

“I remember being chased from the informal settlement by white men with dogs,” she says. “The move was rough. They threatened to demolish my shack if we did not move. We were told that we would get houses as soon as we moved to Lindelani, but l am still here and the holes on the roof of my shack are becoming bigger with every rainy season.”

“To think that our country was freed in 1994, but look at the small shack I live in. I keep that picture of Mandela as a reminder. I have put many Xs inside the voter ballot boxes but that has not changed anything.”

Sibongiseni Siyaya, who was also moved with his family from Apex to Lindelani, is also still waiting for the home he was promised. He is unemployed and says his dream is to get a house of his own.

“Those chemical toilets you see came only recently and at some point they were not being cleaned regularly enough,” he says. Water supplies from Jojo tanks on the street are unreliable and the electricity they were promised has never materialised, he says “And where are the houses they promised us when we moved from Apex? It feels like we have been waiting forever.”

Dina Gafe, who was moved to a serviced stand in Extension 9, suffered a stroke a few years ago and has lost the use of her hands, and uses a stick to walk. Her stand has a toilet, but she is unable to use it as it has been locked since the day she was moved there in 2014. The communal street chemical toilet is too far for her and she struggles every time she wants to use the toilet.

“I get frustrated every time I look at that toilet. I need it now more than ever because I cannot do much for myself, but no one has been able to give us answers,” Gafe says.

She relies on her nine-year-old granddaughter to fetch water from the truck which comes to her street. But sometimes the child is at school when the truck comes. 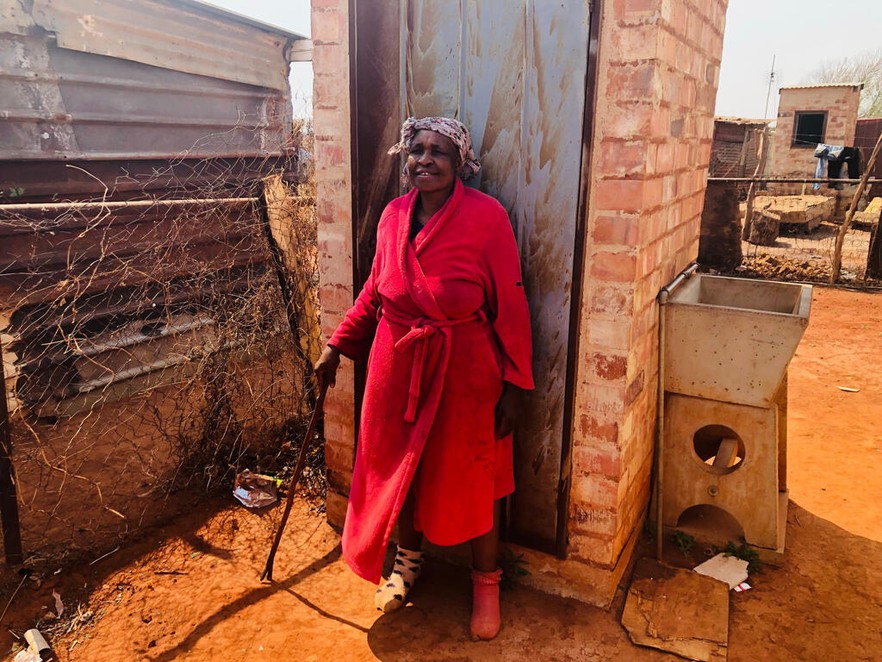 Dina Gafe stands in front of the locked toilet.

“I’m tired of carrying water buckets, my head hurts from balancing water every day. I want an RDP house with a kitchen and a sink, as they promised us,” said Nqobile Ndwandwe, another resident. “Officials only come here to entice us into voting and make empty promises. Afterwards they disappear only to show up when another election is near.”

“For years we have protested but to no avail. We were told that a budget was released to build houses in Alliance but already there are problems and the project has stopped. We now watch as other people are being moved to the few houses which have been finished, but no one knows what criteria are being used.”

Victor Hlatswayo, a community representative, says: “Nothing makes sense, we have been promised many things which have not materialised.”

Politicians squabble as the wait goes on

In a response to a written parliamentary question from Cuthbert, which included a request for the names and details of companies awarded housing construction contracts in the area, then Human Settlements minister Lindiwe Sisulu responded: “I am constrained and prohibited by the document titled “Guide to Parliamentary Questions in the National Assembly” from providing the Honourable Member with the name of the contractor.

This document states that: “Names of persons, bodies … are only used in questions if the facts surrounding the case have been proven. As the mere mention of such names could be construed as publicity for or against them, it should be clear that this practice is highly undesirable.’”

Cuthbert then submitted a Promotion of Access to Information Act (PAIA) application for the information, including a request for the names of beneficiaries and contractors. Sisulu sent the PAIA request to the City of Ekurhuleni, which responded, naming several companies involved, including the Edwin Sodi-linked NJR Projects.

Responding to questions from GroundUp, City spokesperson Nhlanhla Cebekhulu said the project in Alliance Extension 1 had ground to a halt due to budget constraints. He said the total project was valued at R211 million.

The project in extension 9 had been halted due to “non-cooperation from the community”, and would continue after an audit had been conducted, he added.

“Currently the department has two projects relating to Alliance Ext 1 and 9,” Cebekhulu said. “The first phase will cater for 1,639 houses and the next phase will cover the remainder of the residents. As soon as the projects are completed, the qualifying beneficiaries from Lindelani will be allocated. The remaining beneficiaries will then be re-blocked and electrified.”

Edwin Sodi did not respond to a request for comment from GroundUp.

Previous:  National pension reform: This is about everyone’s future