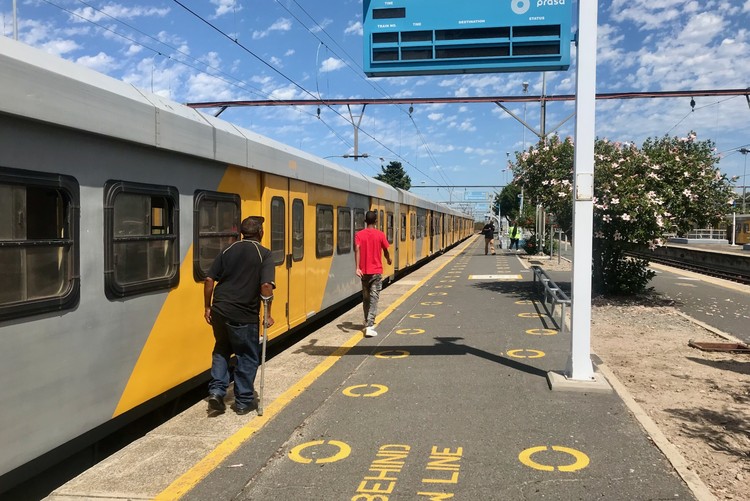 A train about to depart from Bellville station to Eerste River on Monday. Photo: Tariro Washinyira

On Monday, Metrorail resumed a limited service between Eerste River and Bellville. The service had been suspended since the first Covid lockdown in 2020.

Passengers wanting to go to Cape Town have to change trains in Bellville.

Commuters on Monday said they were happy that trains were operating again. Peter Solomons, who was travelling from Mutual to Eerste River, said, “Without a train, life has been difficult for my family as we usually travel on trains for both business and leisure. Train is affordable and safe. Today, I spent R18 on a return trip; with a taxi I needed R40 a day for a one-way trip. I can now feel the money in my pocket.”

He said many people were still unaware that trains were back.

Previously, the busiest train was at 6am to go to work. There is currently no service at this hour. There is a similar problem in the afternoon when people want to return home.

“For now some people are taking taxis because they want to be home early. They can’t wait for a train for two hours,” said Solomons.

Charlotte Heyns was on her way home to Eerste River from Blue Downs.“I am happy the train is back because it is convenient,” she said. She said her weekly bus ticket for Eerste River to Blue Downs was R256. A weekly train ticket for the same route is R36.

“The money I have been using for transport I can now use for other things such as groceries and electricity. My husband is currently using a bus, he works in Cape Town. If trains are going to be operating regularly and on time, I can guarantee he will go back to taking a train again,” she said.

Willie Van Rooy, of United Commuter Voice, had come to monitor the service.

“I didn’t see many commuters on the Eerste River train in the morning. I think the message from Metrorail that the train is operating again didn’t reach the community; there was a lack of communication. Children from the community were excited to see the train as it moved and they ran towards it,” he said.

“Corruption has ruined the Passenger Rail Agency of South Africa (PRASA) and with Covid-19 the train problem hit the community quite hard. It is a relief to see lines opening again in Eerste River, which has a lot of problems with unemployment, stolen copper and vandalism of the railway line.”

In a statement on 14 January, Metrorail said, “The next phase is for us to do trial operations on the line with the People’s Train. There are no train fare increases yet on the service, the old train fares will apply. The Eerste River line was one of the busiest corridors on the Northern Line.”

This line served as a feeder for the Strand and Stellenbosch lines.

Mihi said plans are underway to repair the Strand Line and restore it to service.