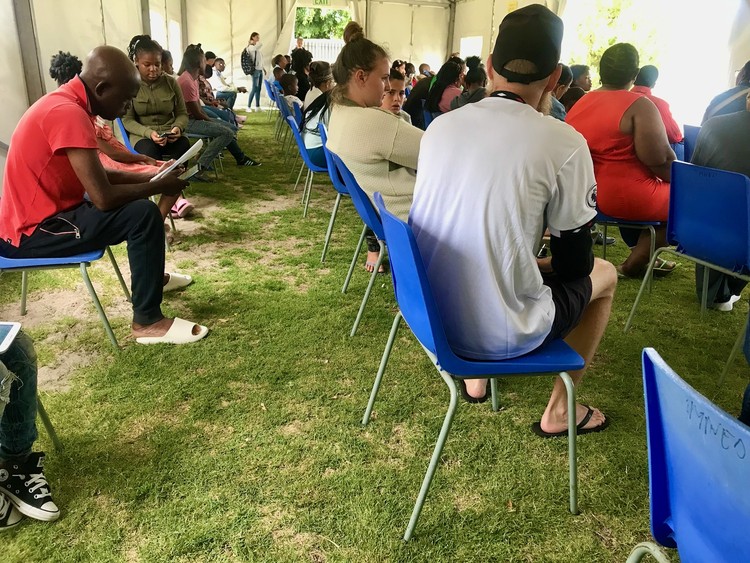 The online application process for grade one and eight learners to attend schools in 2023 opened on 19 July and closed on 31 August. Enrolment and placement of learners took place between 1 September and 15 December. But many children were still not placed as 18 January, the day Western Cape schools open, approached.

Parents waited in rows of chairs inside and outside a tent after being allocated numbers by security staff at the gate. Officials were helping parent number 70. People kept arriving. The queue moved efficiently.

GroundUp spoke to a parent, who gave her name as Unity. She said she was there to look for a place for a cousin whose parents both died last year.

“At the district I received excellent service. The child was put on the waiting list and I was also advised to try Adult Basic Education and Training (ABET) since my child is already 16,” she said.

“This includes late applications made up to 19 December. This is a massive improvement from previous years, as we have placed 50,160 more Grade 1 and 8 learners than this time last year,” she said.

“We are currently building 842 additional classrooms for the 2023 school year which will accommodate at least 26,000 places for learners in the province. This is an unprecedented building programme. We are building the equivalent of one school every four days, or eight classes per day on average, to accommodate needs. We are also appointing up to 1,143 additional teachers in the system this year.”

One of the new schools is organised by the Metro North district – the Tygerberg STEM Academy housed in the Tygerberg Art Centre. It will accommodate 160 grade eight learners and is already fully subscribed.

“The learners enrolled come from the Parow and surrounding areas,” said Hammond.

She said there were other initiatives taking place in the district, with a new primary school in the Sandown and Rivergate area, which will accommodate grades 1, 2 and 3.

“We do expect to have some new arrivals due to late enrolment, as seen in other provinces such as Gauteng. This makes it very difficult to plan for.”

“By applying late, however, parents run the risk of having to wait as we place their child accordingly, taking into account their grade, the area in which they reside, their language of learning and subjects (in some cases). Many factors are involved in placing learners … Despite ongoing and repeated calls, we still are seeing late applications for learners today.”

Next:  Dam in Nelson Mandela Bay is at its lowest level ever