Dam in Nelson Mandela Bay is at its lowest level ever 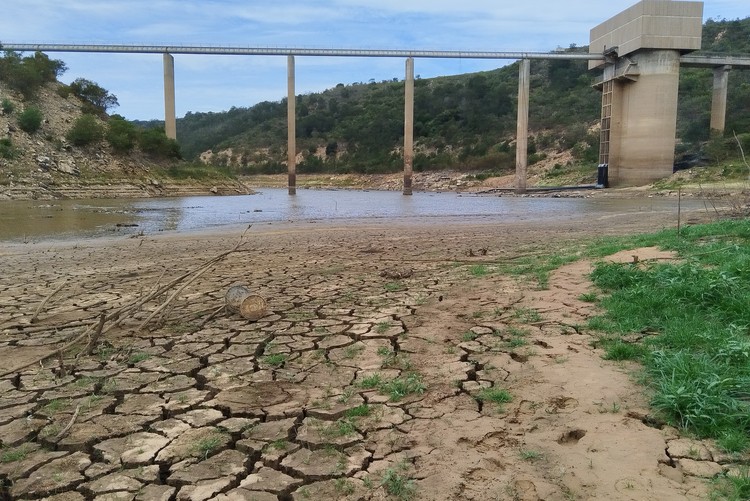 The Nelson Mandela Bay Municipality says the Impofu Dam was at just over 7% last week. This is the lowest since it was constructed in 1983. Photo: Mkhuseli Sizani

“If this drought continues, the Churchill Dam will dry up by April,” warns a senior official at the Nelson Mandela Bay Municipality.

The dam currently supplies water to the southern and western suburbs of Nelson Mandela Bay, including parts of the densely populated KwaZakhele and New Brighton townships.

The official, who asked not to be named, said that thousands of households in these communities as well as parts of the Kouga Municipality will be without any running water should the dam run dry.

The official said that should this happen, water will then be pumped directly from the Nooitgedacht water scheme. “When this process starts, people should know very well that we have reached Day Zero,” the official said.

Last week, Mayor Retief Odendaal urged residents to reduce their daily water consumption urgently. As of 11 January, the combined dam level was 15% of which only 9% is usable water.

In the statement, Odendaal said that the City could no longer meet its daily water demand of 286 megalitres. Dam levels, as of 9 January, were recorded as follows: Churchill Dam was at 31%, Kouga Dam was at 16%, Groendal Dam was at 16% and Loerie Dam was at 47%. The City highlighted that Impofu Dam level which was at just over 7%, is at the lowest level it has ever been.

“The pumps on the barge near the intake tower will soon reach the riverbed and will need to be moved. The new barge, 6km downstream near to the dam wall, requires electrical connections before it can be brought online. This will allow the municipality to draw the last remaining dead storage from this dam.

“The drought situation is real and we need everyone to take it seriously and reduce their water consumption,” Odendaal pleaded in the statement.

Churchill Dam level in July 2022 (on the left) and Churchill Dam in January 2023 (on the right). A senior worker at the municipality says “if this drought continues, the Churchill Dam will dry up by April.” Photos: Mkhuseli Sizani

Each person has been asked to only use 50 litres of water per day. Despite the current crisis, many residents and visitors appeared to be ignoring the water restrictions over the festive period.

Nozuko Singaphi from Zwide said, “The meters are good under the current water crisis but we have big families. In summer we do most of our traditions like slaughtering and homecoming parties for the initiates. Everybody is at home and consumption of water increases.”

Charles Grootboom from Govan Mbeki township said, “I had to buy a water tank for R2,500 in order to have enough water for my family of five and for when I do my traditional functions.”

In Kariega, hundreds of Gunguluza residents in Area 11 have been hit hard by the water shortage since July 2022. One of the municipal water truck drivers told GroundUp that they have to make three trips a day to the area to get enough water to it.

Resident Khayalethu Kate said people in often go days without getting any municipal water. “I call the municipality for the water truck to deliver water. We complain every day. The water in those trucks is not even clean … sometimes you have to boil it before cooking porridge for kids,” he said.

Kate said the situation was worse for the many people with disabilities living in council homes. 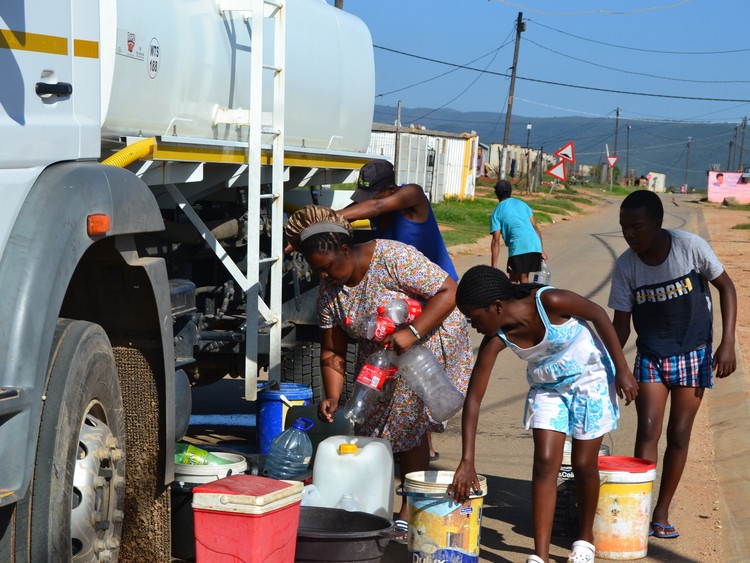 Residents in Phase One, Area 11 in Gunguluza bring their buckets and containers to get water from the municipal truck. Photo: Thamsanqa Mbovane

In the Kouga Municipality, Mayor Horatio Hendricks said that while households still had running water, beach showers have been prohibited.

Hendricks told GroundUp, “We share the Churchill, Impofu and Loerie dams. So the current water situation in Nelson Mandela Bay has a severe [impact] on our region’s water supply.

“We draw just 30% of our full annual water quota from the dams.”

Hendricks said that should it get to a stage when taps run dry, the municipality plans to deploy about 100 water tankers when needed.

“Two of the four [water] plants to purify borehole water are already completed. Kouga Municipality will soon be able to supply drinkable borehole water to residents,” he said.

Two more plants are planned for Hankey and St Francis Bay. These will be completed soon, he said.

Next:  How Lottery money was used to fund mansions for high flyers