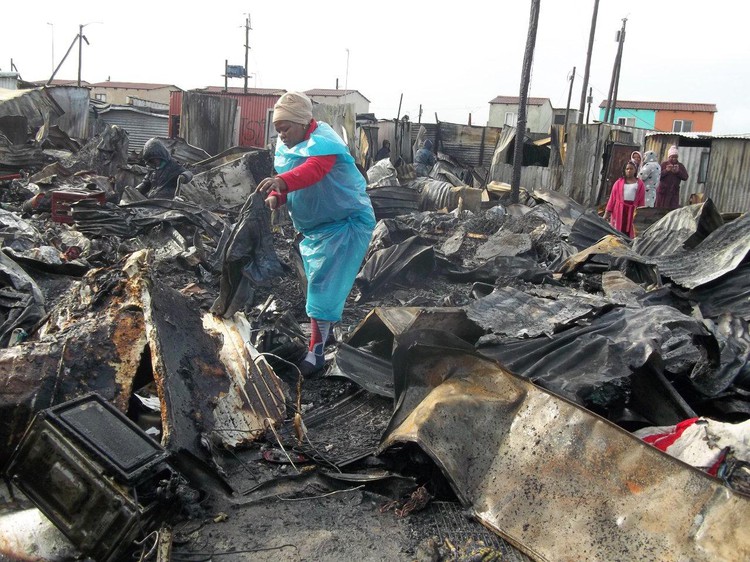 Nyameka Blaai who lives in Tsunami informal settlement, Delft, looks through what remains of her shack that was destroyed by a fire that killed a 35 year old man and left more than 50 people homeless. Photo: Vincent Lali

A 35-year-old man was killed in a fire that left over 50 people homeless in Tsunami informal settlement, Delft at about 3am on Tuesday.

Resident Nyameka Blaai said the deceased, Thembekile Mali, was sleeping with three other people in a wooden and corrugated iron spaza shop when the fire broke out. “After I heard several small explosions and smelled smoke, I woke up and called out other residents to come and help,” she said.

Blaai said that people managed to escape from the top of the two-storey shop, leaving Mali asleep downstairs. “They were calling his name and he responded but he couldn’t come out. I saw the shack in flames collapse on him,” she said.

Shop owner Mzukisi Mgwaca said Mali worked as an assistant at his shop. He described him as “kind”. Mgwaca said another assistant who was in the shop had cuts on his hands from moving the zinc sheets so they could escape.

By Tuesday afternoon, charred school books, bottles and Mali’s remains could be seen on the ground in a cordoned off area. A group of residents, including those who lost their homes, were standing around the scene, shivering in the rain.

Blaai, who only had on a scarf, red jacket with a blue plastic bag over it, grey tights and slippers, said she lost all her belongings. She explained that it was the fourth time her home had been destroyed by a fire.

Andiswa Kwakhe lived with her nine-year-old son and her brother. They rely on grant money to survive. “The fire was already uncontrollable when I woke up. I grabbed my son and a suitcase packed with clothes … I have been standing in the rain outside since morning. I have not eaten today, so we’re hungry,” she said.

Community leader Nikiswa Cengimbo said, “To put out the flames, some residents collected water from a container belonging to a car wash nearby. We have no communal taps here.”

Kwanele Mcaleni said the shack dwellers have been asking for the installation of taps and electricity for years. “Leaders come here during the elections and falsely promise to give us basic services. I’m not even interested in the upcoming local government elections,” he said.

Ward councillor Xolani Ndongeni said Tsunami had taps but they were vandalised. “I asked the Department of Water and Sanitation to replace the damaged taps, but it has not yet done so,” he said.

Edward Bosch, spokesperson for the City’s Fire Service, said the cause of the fire is unknown.