They have been demanding municipal jobs since 2019 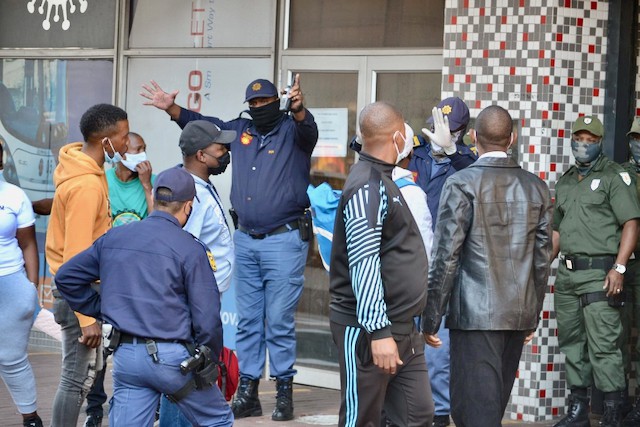 About 50 unemployed security guards shut down a busy municipal customer care service centre in the Gqeberha city centre on Tuesday.

The protesters, some of whom came from Kariega and Despatch, say hundreds of them were left out of an insourcing process proposed by the EFF and started while Athol Trollip was still mayor.

Protest leader Zibele Sabisa said they have been protesting since 2019.

The protesters accused the current administration of returning to a policy of outsourcing security guards. Nombuzo Magxa, one of the protesters, said, “The mayor said we must bring proof that private companies have been given tenders by this municipality and we did give him the proof.”

Asked if the municipality was now employing guards through tenders and private companies, spokesperson Kupido Baron responded by WhatsApp: “We gave you a response that we are not insourcing any more security guards.”

The protesters barred dozens of customers from paying their water and electricity bills or from entering the 13-storey Mfanasekhaya Gqobose building. They only allowed municipal workers to enter.

They clapped hands and sang Isikhalo somntana sihoye (Listen to the cry of a child) and Amabhulwamnyama andenzi wari (Black boers make me worried) on Govan Mbeki Avenue.

A tactical response team arrived, but it was only when public order police came as backup that the doors were unlocked.

Head of metro police Mlindi Mangwane called for calm. He told the protesters that Mayor Nqaba Bhanga and the city manager had said they “have tried all angles but unfortunately they can’t meet your demands due to budget constraints”.

Mayco Member for Safety and Security Councillor John Best said, “In 2018, the Council of the Nelson Mandela Bay Municipality approved a resolution to insource an additional group of guards (more than 200) who didn’t make the list during the first phase of the insourcing of security guards by the institution. We only insourced guards who were performing duties at permanent sites. The security guards, who illegally closed our administrative building this morning, did not form part of that process.”

He said, “National Treasury advised us that no further insourcing can be considered. We condemn the illegal closure of one of our administrative buildings as the disruption of services cannot be tolerated.”

Next:  “We don’t have anywhere else to go” says Johannesburg occupier

Previous:  “I grabbed my son and a suitcase packed with clothes” says fire victim describing a chaotic scene