For two weeks, Harrismith residents were without electricity because a substation broke down. It has been a disaster for many businesses and caused misery for residents.

Crucial generation components burnt out in the substation on 5 September. Power was briefly restored for two and half hours on the 12th, and finally came back up at 3:40pm on Sunday, but residents wonder how long it will last. Meanwhile, to add to the distress, Eskom has been at stage 6 load-shedding nationally.

On Monday, a sizeable crowd gathered outside the municipality, chanting and toyi-toyiing. In a memo the demonstrators said the community had lost confidence in the municipality. They demanded reimbursement for losses, service agreements governing future water and power outages, maintenance plans to prevent future failures, and that the quotations for repairs be made public and be done in a transparent manner.

The memo was received by Mutlanyane Sekete, special advisor to the mayor.

Municipality spokesperson Thabo Kessah said a contractor was appointed on Wednesday, but the cost had not yet been fully determined.

“it is difficult at this stage to determine timelines,” he said.

Work started on Thursday. On Sunday afternoon power was restored.

At a meeting called by Harrismith businesses last week, Thsepang Msibi, who owns an internet cafe, said he cannot operate without power and he had closed up shop. He said he used a generator for a while but it was expensive and people have stopped coming to town.

Free State member of the provincial legislature Leona Kleynhans (DA) said the municipality is bankrupt and operating on an unfunded budget. It owes R11-billion to various creditors, including Eskom.

Kleynhans said the Gauteng High Court had ordered the municipality in June last year to make an agreement placing Eskom in charge of managing the municipality’s electricity transmission and its revenue.

But the council has not implemented the court order.

Bloemfontein Eskom communications practitioner Stefanie Jansen van Rensburg said, “Since the order of the Gauteng High Court, Eskom has been in constant negotiations with the municipality to finalise the terms of an Active Partnering Distribution Agency Agreement. From Eskom’s side we are ready to implement and are anxiously awaiting final agreement by the Maluti-A-Phofung council.”

She said the municipality is R6.7-billion in arrears.

Municipal spokesperson Kessah said council had resolved to abide by the court order on the Eskom matter on 23 May 2022.

He said a significant amount of the billions owed to Eskom was due to penalties for exceeding Notified Maximum Demand. 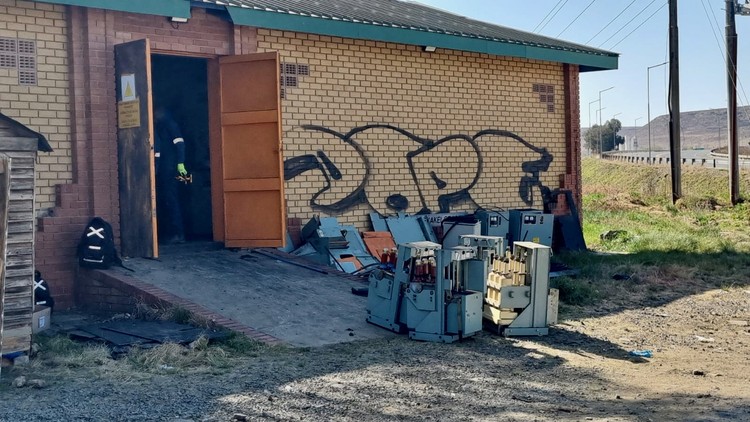 This electricity substation in Harrismith, Free State, has been down since 5 September, leaving thousands of people without power. It is uncertain if or when power will be restored.

Next:  Give us jobs, chant hundreds of Gauteng workers