Give us jobs, chant hundreds of Gauteng workers 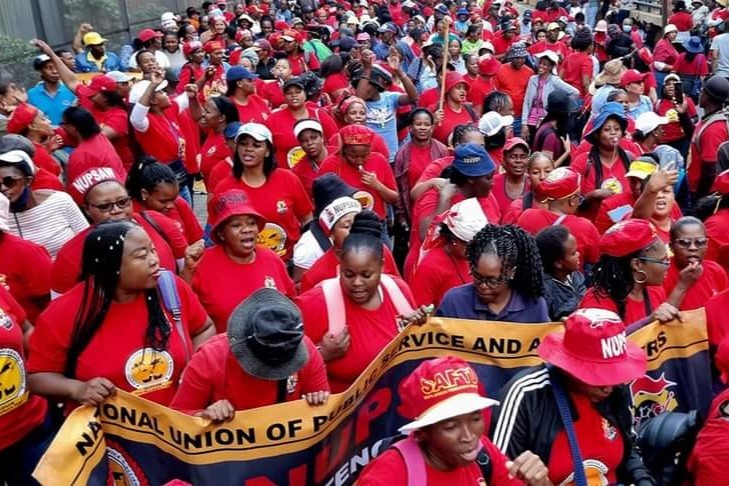 “We are taken for granted. The work we do has doubled. And we carry most of the workload, especially at a community level, without complaining,” says Ntuki Sejosing from Protea in Soweto, Johannesburg.

She was among hundreds of workers affiliated to the National Union of Public Service and Allied Workers (NUPSAW) who marched to the Gauteng Department of Health on Friday.

The union is demanding that its members, employed under the Expanded Public Works Programme (EPWP), among others, be employed permanently by the health department.

Sejosing works as a cleaner for the department and has been an EPWP worker for more than seven years. She earns R3,200 a month and says this is not enough to support her two children and her unemployed sister.

“We want the department to recognise us and pay us what we deserve. I’m truly suffocating. Transport fares and food are going up every day,” said Sejosing.

In March, workers protested and occupied the health department’s office, demanding that a notice to terminate the contracts of EPWP workers be rescinded. The department then extended the contracts by a year.

NUPSAW, however, wants workers whose contracts are continuously being renewed to be made permanent. It has accused the department of breaching the Labour Relations Act for failing to do this. The union said most EPWP workers have been working for the department on a contract basis since 2010.

The Public Health and Social Development Sectoral Bargaining Council had appointed a commissioner to preside over the matter. NUPSAW said it was waiting for the outcome from Council on whether contracted workers should be considered as permanent employees.

Sibonile Jeza, NUPSAW national organiser, said a new date for the arbitration would have to be announced because the commissioner who was appointed withdrew from the case. He said the union had voiced its concern that the person appointed was a junior commissioner with no experience.

Jeza said the department has agreed to meet union representatives on the 12 and 13 October in a bid to settle the matter.

“These workers are regarded as public servants, but they are not permanently employed. The department has been overlooking EPWP workers for a long time and we want that to stop,” said Jeza.

Next:  “If you want us to bring his head or hand that can be done” - immigrants extorted for protection money

Previous:  Residents take to the streets after Harrismith without power for two weeks