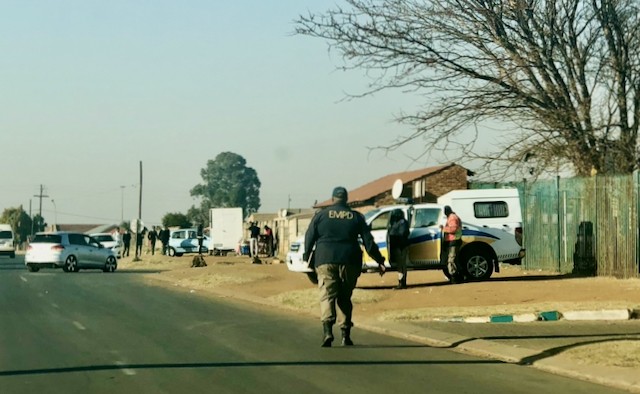 “Racial gangs have been causing havoc in the school for years and nothing has been done. We hear of gang fights in the school, students bringing guns and blades to the school, drug dealing and no one is being expelled,” says Moses Ngwenya, a member of the School Governing Board (SGB) of Geluksdal Secondary in Brakpan.

According to parents, the violence is mostly caused by gang fights, apparently between black and coloured students. The school is located in what is historically a predominantly coloured area.

In a recent incident on 17 August, witnesses told GroundUp that a grade 12 learner was assaulted by a group of a dozen adults, apparently taxi drivers. Gunshots were also fired in the air around the school by the men.

The 19-year-old learner was taken for treatment at Pholosong Hospital and has since been discharged. His mother said, “My son was hit on the head with a gun by taxi drivers, yet he was not even part of the gang. They were going around beating every coloured student they saw. Next thing our children are going to die in the school if the issue of gangsterism and violence is not dealt with.”

She opened a case of assault at the police station.

Metro Police are monitoring the school daily since last week’s incident, as requested by parents and the SGB.

According to a circular to parents issued by the school principal, two learners fought at break time. Afterwards, one of them called his brother, a taxi driver, to take revenge. This resulted in the assault. Both learners have been suspended.

A video of the incident has been circulating in the community appearing to show taxi drivers in their vehicles chasing after students, while other taxi drivers stand at the school gate demanding to be allowed to enter the school.

Last week, outraged parents threatened to shut down the school, accusing staff of failing to deal with the violence, gangs and bullying.

On Monday, a memorandum of demands was handed over by the SGB to delegates from the Department of Education. Among the issues raised: parents demand the school principal and SGB chairperson be removed, permanent deployment of metro police, the removal of taxis that fetch students directly from the school, overcrowding in the school, issues of racism and gangsterism among students to be addressed, expulsion of students bringing weapons to the school, and safety measures to be put in place for students.

“Our children learning at the school are living in fear,” said Ngwenya.

“What happened to the learner is a wake up call for the long history of violence in the school to be addressed. It’s high time the department intervenes. The last thing we want to hear of is students dying as a result of violence as has been reported in other schools,” he said.

Tsakane SAPS Station Commander Colonel Goodall Khumbulani Mbatha replied to GroundUp that police met with numerous parties last week over concerns for the children’s safety at school and on their way to and from school.

“They also have racial issues where there are fights between coloured learners and African learners,” Mbatha’s statement said. “SAPS will increase visibility around the school and continue with safer school programmes.”

According to Devon van Wyk, a community representative, the school is meant to have only 950 students but currently has 2,400 students. There aren’t enough members of staff to keep order.

We spoke to a number of parents who described their children enduring beatings, thefts and threats.

We also spoke to learners at the school. One of them said, “Black students have their own gang to help defend themselves against the coloured gang.”

Next:  Judge rules that “Kill the boer - Kill the farmer” is not hate speech