From a “mega project” to an “upgrade”: Marikana Soutpan families are still waiting 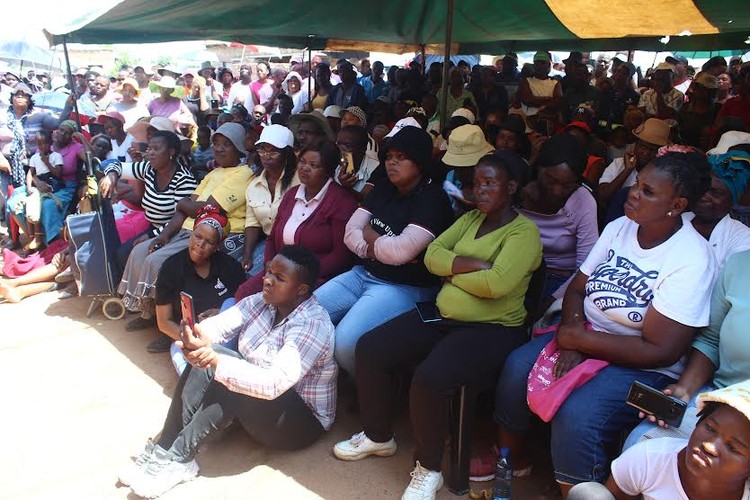 At a meeting last month, residents of Marikana Soutpan north of Pretoria were told their settlement will benefit from an “upgrading project” instead of the “mega project” they were promised years ago. Photo: Mosima Rafapa

The long awaited “mega project” promised by the Gauteng Department of Human Settlements to families in Marikana Soutpan informal settlement north of Pretoria has been cancelled. Instead, they have been told, their area will benefit from an “Informal Settlement Upgrading Project”. But in the absence of a timeline or budget, the families are worried.

In 2017, residents of Marikana Soutpan were told their area would be developed as part of a mega project to be completed by 2023-24. In 2020, when they asked why nothing had happened. They were told the project was on hold because of “land invasions” in the area. In April last year, Human Settlements said the plan “is still in place”.

But now, it seems, the “mega project” has been abandoned.

According to the Tshwane Department of Human Settlements and Planning, more than 10,000 families live in the area. There is no electricity, water or sanitation. Most households rely on illegal electricity and water connections; some have pit toilets and some people have built brick houses and a makeshift sewage system. People moved to the area in 2012.

On 29 September this year, residents marched to the Human Settlements offices to hand in a memorandum. Last month, a community meeting was attended by more than 700 people.

At the meeting, Sam Mahatlane from the Department told residents that the mega project had been dropped due to budget constraints and the lack of land where people could be relocated to make way for the mega project.

“That type of development is no longer implementable. We have decided to provide services, fix roads and provide electricity. People will also receive stands and title deeds so that those that are able to build for themselves, do so and not wait for the government,” said Mahatlane.

Thabang Maunatlala has lived in Marikana since 2014. She and her three children make use of a pit toilet and use a paraffin stove to heat water and cook. Maunatlala said they had given up hope that services would be provided.

“For the past three weeks, we haven’t had water. It only comes out at 2am and that’s when we fill our buckets,” she said.

Community leader Lolo Lekalakala was one of the first residents to put up shacks in the settlement. He said he felt let down by the department.

“Children have died in this area because of illegal electricity connections. It’s been too long,” he said.

Resident Mabel Baloyi said a seven-year-old boy had died a year ago from electrocution. “We want services, we’ll just have to see when it happens,” said Baloyi. “I don’t trust the government anymore.”

Marcia Maruma moved to the settlement in March 2021. She lives with her husband and three children. They bought a house from a former resident after she saw an advert on Facebook. The house has three bedrooms, two bathrooms, a kitchen and a garage. She is afraid the structure will be demolished.

“If they say they’re going to demolish that structure, are they going to compensate us? That structure is the reason I relocated from Johannesburg. I needed security for my children. We had just been hit by Covid. No one knew what was going to happen,” said Maruma.

In response to GroundUp’s questions, Human Settlements spokesperson Tahir Sema said the mega project could not go ahead due to challenges of “land invasion and land assembly issues”.

“The Department had to switch from a mega project to informal settlements upgrading because of the current land invasions. Mega projects require vacant land and the department does not have land where a large number of people can be relocated to while starting the project,” said Sema.

Responding to the issue of permanent structures, Sema said, “There is a standing court order that prohibits people from building permanent structures since it was invaded. Any built structure is illegal and therefore the Department cannot compensate people who violated the court order and the municipal planning bylaws. The Department’s Planning Unit will work hard to ensure that demolishing structures will be the last resort and only those structures that encroach on the actual infrastructure will be demolished.”

She could not provide GroundUp with a copy of the court order.

Next:  Why GroundUp is taking the Legal Practice Council to court