Nelson Mandela Bay Municipality warns of fines of up to R8,000 for using izinyoka connections 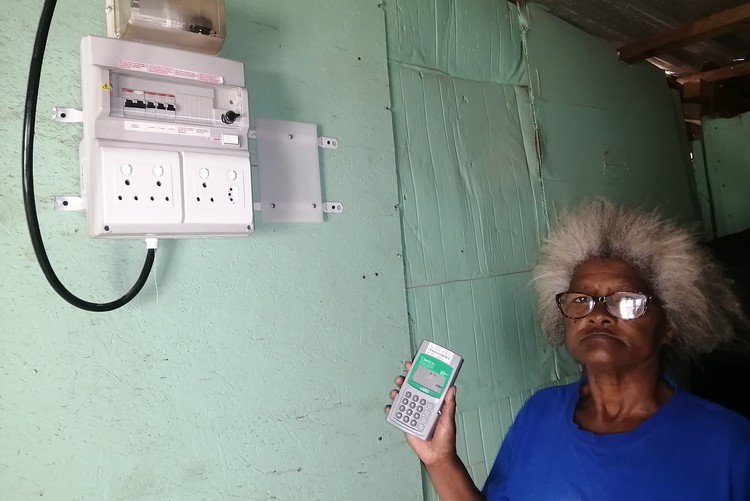 Margaret Kivido says electricity was installed about a month ago but has been off since 23 October. Photo: Mkhuseli Sizani

When 64-year-old Margaret Kivido woke up at 2am to make a cup of tea before starting her day on 23 October, her electricity was off. But when she checked her newly installed electricity meter, units were still being deducted.

Kivido is among residents living in 340 shacks at Kliprand informal settlement in Gqeberha. On 22 June, the community staged a protest saying a promised electrification project had been delayed for eight months. In August, residents protested again after the tragic death of 17-year-old Erris Jonkers. The teenager was electrocuted while checking live wire connections spread over the Chatty River near his home.

About a month ago, 314 of the shacks had electricity meters installed, but residents say their joy was short-lived because the boxes are riddled with problems.

Resident, Annie Bell said her fridge and stove were damaged. “I’m very disappointed with this electricity. We never experienced these problems when we were using izinyoka connections,” she said.

“I survive on piecemeal jobs so I don’t know how I’m going to buy these appliances again,” she said.

Marina Buys, who has lived in the community for 50 years, says her family of 10 previously relied on illegal connections. “This is the first time in my life I’m using ‘safe’ electricity.

“To buy a cable and connect illegally cost me R700. Then the monthly fee was between R200 and R300. The municipal electricity is much cheaper. This is a great relief. I want the izinyoka to be removed because it is very dangerous, especially to our children,” she said.

Valencia Ruiters, community liaison officer, said that the project to electrify the remaining 26 shacks will be completed once house numbers have been allocated to those shacks.

“We have been engaging the municipality to speed up this house numbering process. We also want the municipality to provide poor families with free electricity. If those families can be assisted, that would help us get rid of all the illegal connections in our community,” she said.

Nelson Mandela Bay Municipality spokesperson, Mamela Ndamase, told GroundUp that the City was aware of the residents’ complaints. “Currently the municipality is using split prepaid meters, where the meter and keypads are separate. Some of the keypads were not allocated to the correct customers, but the matter has been resolved.

“The City is not aware of the reports or allegations of electrical appliances being damaged by the legal power supply.”

Ndamase warned that residents found to be using illegal connections could face a fine of R4,000 for the first offence, R8,000 for a second offence and R12,000 for a third. On the delays getting the shacks numbered, she said the municipality is resolving the issue.