Is this the worst-run municipality in South Africa?

Vereeniging is a disaster. But will voters punish the ANC? 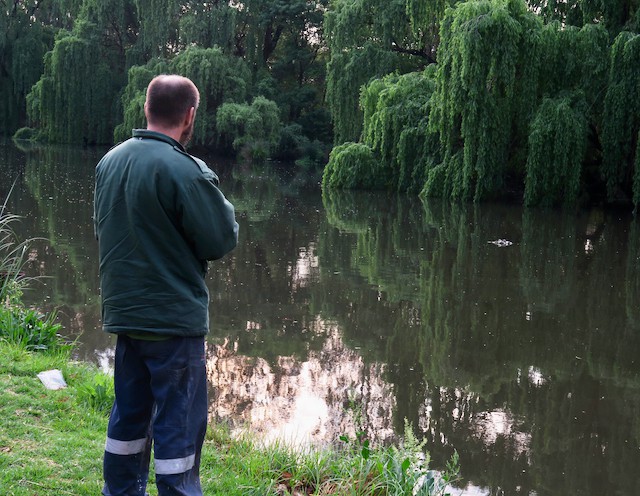 Lifelong Vereeniging resident Leon de Klerk stands on the bank of the Klip River where he says his grandfather taught him to fish as a child. The river is now so polluted that dead fish, visible above in the middle of river, often float past. All photos: Steve Kretzmann

It is nearing sunset on a Friday and parked on the bank of the Klip River in Vereeniging, Leon de Klerk sits in his bakkie, door open, sipping a beer and watching the placid waters. His grandfather taught him to fish at this very spot when he was four. Now that he is 42 and a blue-collar worker at the Mittal Steel factory, the serene view is a welcome change from the clashing noises of the factory workday. He stops here most days after work on his way home to his wife.

On weekends he has a braai along the 200 metre stretch of free, publicly accessible river left in the town. The rest of the seven-hectare Vosloo Park, encompassing the confluence of the Klip and Vaal Rivers, as well as a 1.5km stretch along the Vaal, was sold long ago by the municipality to private developers. Fishing is now out of the question; the water is too polluted.

A dead fish floats past us covered in flies. He points out more dead fish, half hidden beneath the willows on the opposite bank.

Across the river is a golf course. De Klerk reminisces how he and his friends used to dive to retrieve golf balls and sell them for pocket money. “I’d swim with my eyes open. I could see the balls on the bottom. The water was clear. Now, I wouldn’t put my finger in it.”

De Klerk points out a sewage leak a few hundred metres away which has been gushing for “about two weeks”. Raw sewage can be seen flowing across the veld towards the river.

A week after visiting Vereeniging, one of the towns within the Emfuleni Local Municipality in Gauteng, a Facebook post by Action for Responsible Management of our Rivers (ARMOUR) showed that the municipality, rather than fixing the leak, dug a channel for the sewage to flow directly into the Klip River.

This is confirmed by Dalene Venter, the DA ward councillor for the area.

“I reported the sewage leak near the Klip River,” said Venter. “They said they’ll fix it. All they did is dig a channel from the leak to the river.” 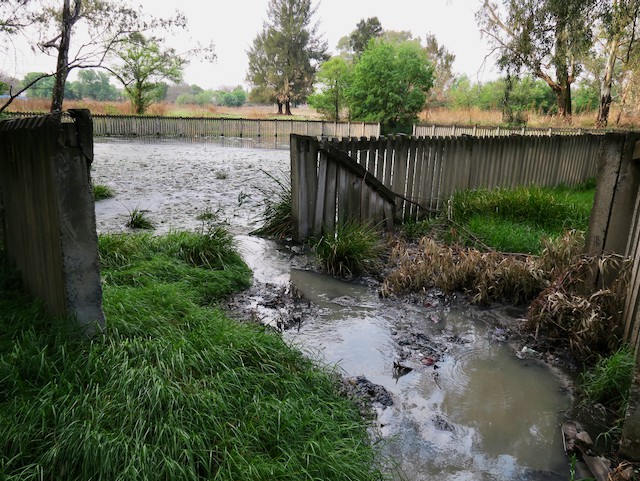 This dam of raw sewage behind a pump station has been unattended since at least July 2019 when it was photographed by Google Streetview.

About two kilometres away, below a pump station along Golf Road, a dam of raw sewage has been unattended since at least July 2019 when it was photographed by Google Streetview. This is in one of the more upmarket areas of the town, only 400 metres from the Vaal River, into which the sewage seeps.

Broken sewerage systems and failing waste water treatment works in Emfuleni, which includes Vereeniging, Sharpeville, Sebokeng, and Vanderbijlpark, have polluted the Vaal River to the extent that the South African Human Rights Commission (SAHRC) has deemed it a human rights violation affecting 19 million people who rely on the river for drinking water, as well as commercial and industrial purposes.

The SAHRC investigation and subsequent report released in February states the extent of the pollution is threatening populations of Yellowfish “peculiar to a few South African rivers such as the Vaal” with extinction. Decreased tourism and recreation on the Vaal has had a negative economic impact. 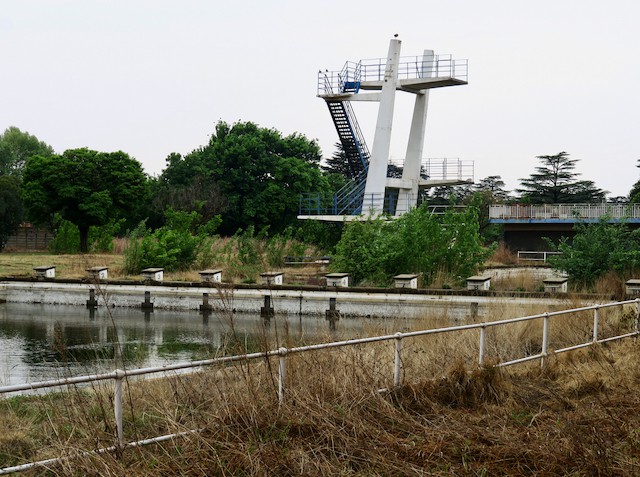 It may be difficult to quantify the full economic impact of the municipality’s lack of infrastructural maintenance, but the Duncanville swimming pool is a micro example. The Olympic size swimming pool was once an aquatic hub with flood lights for provincial galas. Besides general public use, it was home to a swimming club, a waterpolo league, and used by numerous schools in the area.

The facility has been shuttered for two decades. Along with other schools, nearby General Smuts High School (which this writer attended in the 1980s) used the pool for swimming practice and galas. According to the school’s yearbooks, the last time it had a swimming team was in 1999, which ties in with the full-grown shrubs now growing through the paving surrounding the pool which once provided employment for a full-time superintendent, a cashier, and a lifeguard during the summer months, as well as cleaning and grounds staff, private swimming coaches, and a tuckshop operator.

Vereeniging used to have two other smaller municipal pools — one in the town centre and one in Three Rivers suburb which was home to the Riverside Dolphins swimming club — but those too no longer exist, leaving no place for the public to swim. Entire sports codes, along with their economic and social ecosystems, have disappeared.

The municipality still contracts a security company to prevent the Duncanville pool infrastructure from being dismantled for scrap but it has decayed to the point it would most likely need to be rebuilt. The guard on duty when GroundUp visited the pool said there had been numerous initiatives to fix the facility, but all had come to naught. 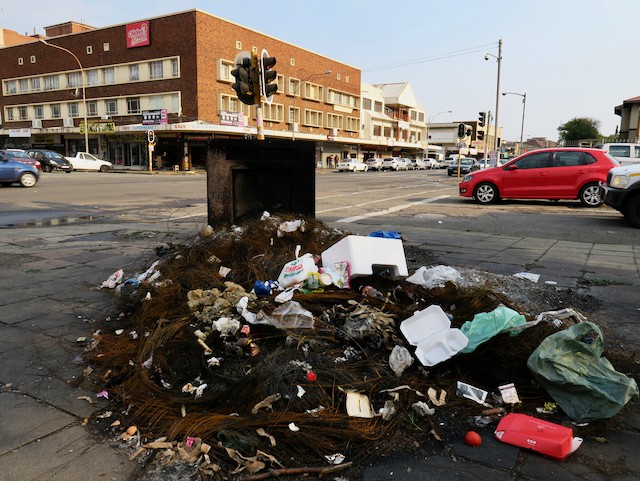 In an area where heavy current can be heard sizzling beneath pylons marching across the veld, failing electricity infrastructure is hampering businesses. Owner of the Boipelo Supermarket in Sharpeville, Morwa Mooi, said that on 11 October the electricity was out for the entire day, from when he woke up until 9pm. He heard the outage was caused by cable theft but unreliable electricity has become so common it was just something he and other businesses have learned to live with, like the running sewage in the streets.

Frequent unplanned outages meant he could no longer sell frozen items such as ice cream, and trying to sell chicken was a gamble. “If you want to get [chicken] cheap you have to buy a pallet for R40,000,” said Mooi. “Then the electricity goes off and blood leaks out and the colour changes.”

As a result he has to limit his stock to items that don’t require freezing.

Ward 10 Councillor Peter Verbeek (DA), who sits on the finance committee, said the municipality owes R3.5bn to Eskom, who seized one of the municipality’s bank accounts on 30 September after Emfuleni failed to honour a repayment agreement.

Verbeek said an agreement had been reached with the national energy regulator (NERSA) in June last year that in order for the municipality to continue selling electricity, 6% of the income from billing (where collections are at about 71%) must be used for maintenance of electrical infrastructure. This would mean a maintenance budget of R159 million, but the current budget was just R35 million, which was “an insult”, said Verbeek. Despite this non-compliance “NERSA decided last month” to continue allowing Emfuleni to sell electricity.

He said in one section of Vanderbijlpark there was only one working transformer when there should be three. When the transformer blew it would put large sections of the industrial town in the dark.

With Vereeniging and Vanderbijlpark the home of heavy industry associated with steel mills, he said industry complained it was suffering market losses due to failing electrical infrastructure. 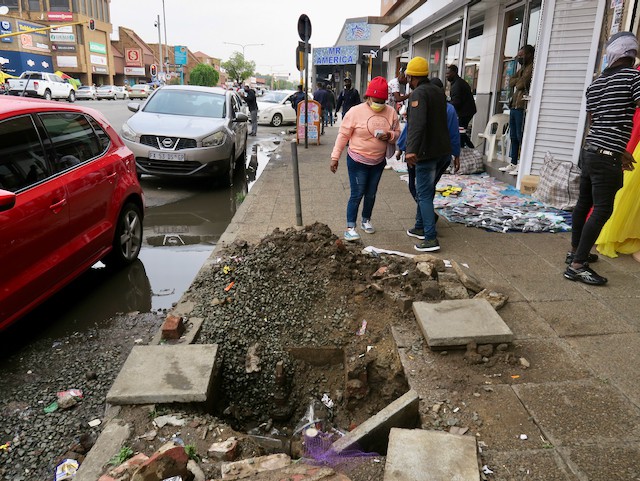 In the Vereeniging city centre, as well as in its suburbs, holes dug to make repairs were left open and unmarked

Chronic mismanagement by the ANC-led municipality resulted in it being put under provincial administration in 2018, but this has had little effect.

A report to Parliament’s Select Committee on Cooperative Governance and Traditional Affairs, Water and Sanitation, and Human Settlement in June last year, reveals the support provided by the Gauteng provincial government has been inadequate: “The Municipality continued to perform poorly, and a number of systemic failures (financial, service delivery and governance) persisted.”

Not only did the Gauteng government fail to improve matters, the South African Local Government Association (SALGA) was of the view the province’s intervention “created some serious legislative and legal problems”.

Among these were that the person appointed in administration and the municipal manager were the same person.

With refuse piled on street corners in central Vereeniging, severely potholed streets with no sign of roadworks, continued electricity outages and sewage leaks, it appears the situation has not visibly improved in the intervening year.

Emfuleni has a R6.5 billion budget, but owes Eskom R3.5 billion, and R1.3bn to the Rand Water Board. The municipality also owes Chinese company Beijing Fuxing Xiao-Cheng (BXC) and Ole Power Systems R492 million with interest of 10% accruing at over R100,000 per day, following a September 2020 court judgment in the contractors’ favour.

BXC, in a joint venture with Ole Power Systems in 2014, entered a Public Private Partnership (PPP) to install 66,000 smart metering systems in residents’ homes, but as reported on Moneyweb, and as court documents show, the municipality frustrated the implementation of the PPP and eventually suspended the project.

BXC then got the Sheriff to start attaching assets, but according to Emfuleni acting head of communications Makhosonke Sangweni, there was a rescission judgement in March this year.

“Part A thereof was set down and there was a ruling in favour of the municipality that BXC must remove the warrants of attachment and restore the monies it had removed. BXC has appealed against this ruling,” stated Sangweni.

He said there was currently an agreement between the parties but the details “can only be shared with the public once all other hindrances are also dealt with”.

Data collected on Municipal Money reveals Emfuleni received unqualified audits from 2015/16 to 2017/18. However, it shows the 2018/19 report is still outstanding and it is also not yet on National Treasury’s data portal.

In the 2017/18 financial year, the municipality spent 25% more than planned on its operating budget, and underspent its capital budget by 35%.

Operational budget over expenditure of up to 5% is normally condoned, and a significant overspend of 25% indicates poor operating controls.

Municipalities should spend at least 95% of their capital budget. Spending less than 85% is a “clear warning sign” explains Municipal Money. Emfuleni spent less than 66%.

Verbeek said in March this year council wrote off R872 million in irregular expenditure, without the processes initiated to reclaim any of it having been completed. This amount equals more than 10% of Emfuleni’s annual budget.

With the history of Sharpeville, together with the electorate of Sebokeng and Evaton, Emfuleni has always been an ANC stronghold, with a high of 76% in 2006, winning 65 of 85 seats. By contrast, the DA obtained a low of 17% of the vote, obtaining 15 seats.

A Sharpeville businessman told GroundUp he did not believe the ANC would maintain a majority after 1 November and he expected that there would be a coalition council with the possibility of a grouping of independent councillors being kingmakers.

Whoever wins power in November has a Herculean task ahead of them.