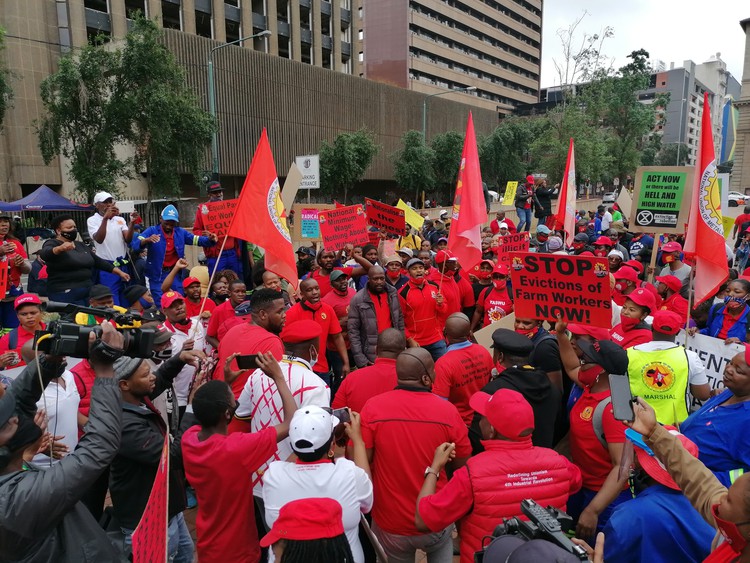 SAFTU members protest next to the Gauteng Legislature in Central Johannesburg as part of the nationwide strike by unions on Wednesday. Photo: Zoë Postman

Thousands of workers and union supporters downed tools in support of a nationwide strike on Wednesday.

Some of their demands related to Covid-19 corruption, the failing economy, gender-based violence, and the government’s proposal to freeze public servants’ wages which means they may not receive a salary increase in the next financial year. 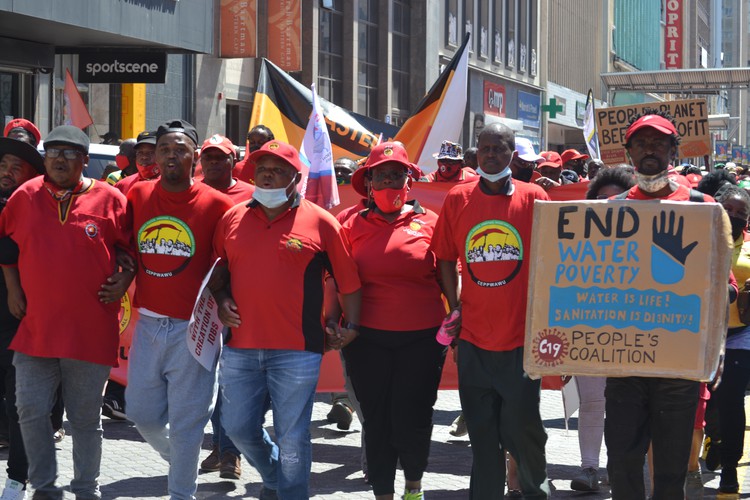 In Port Elizabeth, about 500 people gathered outside the city hall where they were addressed by Fikile Desi, a senior ANC official.

But during Desi’s speech, protesters kept shouting “Thief! Thief! Thief!” and booed him from the podium.

Lunga Nombexeza, the South African Communist Party (SACP)’s regional secretary and councillor in the Nelson Mandela Bay Municipality said: “Even if we are going to be taken out of office we are not afraid … The Premiers and Ministers salaries are increasing, yet as the working class we are not treated fairly. This is not only an attack on the workers, but also their children.

In Johannesburg, over 100 people protested next to the Gauteng Legislature. Members of the National Union of Metal Workers of South Africa (NUMSA) and Young Nurses Indaba Trade Union (YNITU) also joined the day of action.

Some protesters held signs that read: “You looted R5 billion and told us to dance to Jerusalema” and “You can’t plan for a future if there isn’t one.”

Zwelinzima Vavi, General Secretary of SAFTU, said the decision to freeze wages was a declaration of war not only on nurses who assisted the country through the worst of the Coronavirus pandemic, but also on the working class.

Treasurer of YNITU, Portia Maskeo, said health workers were tired of “being played for a fool by the government.” She claimed some health workers had died from Covid because of inadequate protective equipment.

While SAFTU was protesting, scores of COSATU members marched down Simmonds Street in central Johannesburg in a separate protest over corruption and job losses. SAFTU members later decided to join the COSATU march. 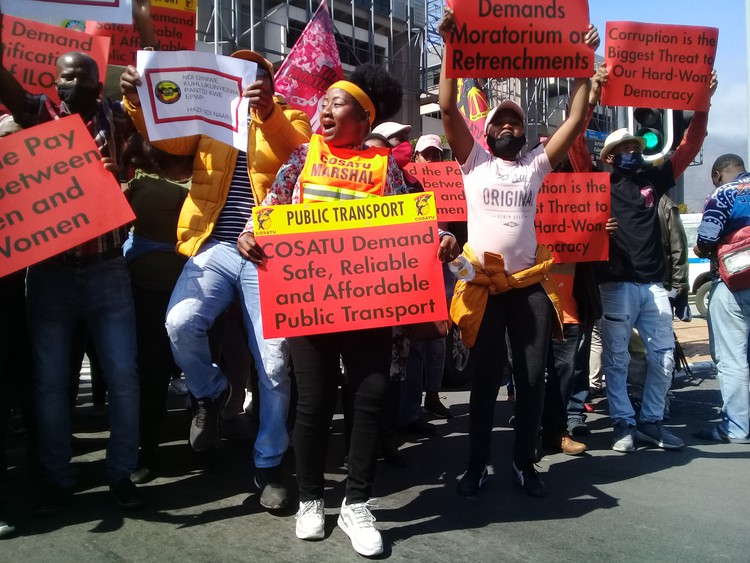 In Cape Town, more than 200 SAFTU workers marched from the Civic Centre to Parliament. Some of their demands called for safe trains, increases to social grants increased, the introduction of a basic income grant and that a moratorium be placed on job losses.

“The Covid-19 pandemic has starkly exposed South Africa’s inequalities at a time our country was already falling apart. We will not just fold our arms while our economy crumbles and communities suffer,” said SAFTU deputy general secretary Moleko Phakedi.

COSATU’s provincial Gender Coordinator, Lumka Tamboer, said the country’s workforce was not being taken care of because “of fat cats that just want to make themselves rich through the workers”.

Chairperson of the Democratic Nursing Organisation of South Africa (DENOSA) Eleanor Roberts said: “There should be justice for workers. The government must acknowledge us as public servants. They cannot say that there isn’t money for us because we also form part of the community.” 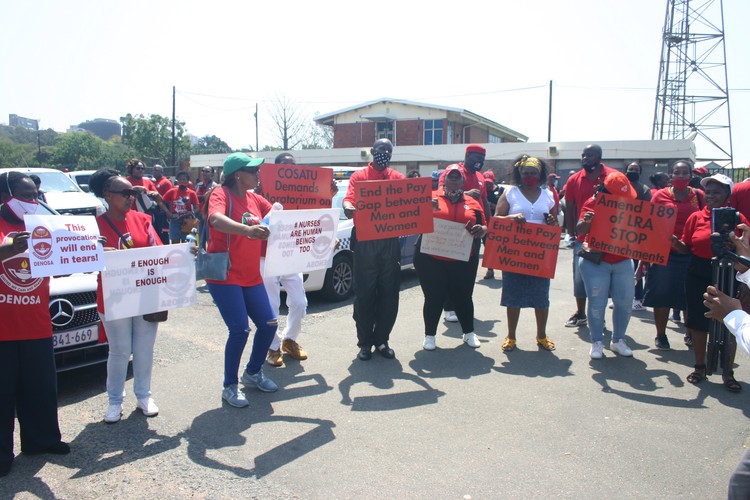 In Durban, scores of workers marched from Curries Fountain to the Durban Central police station to hand over their memorandum. The protest was joined by members from Port Shepstone, Pietermaritzburg, Empangeni, Richards Bay, and Mandini. Other protests were also held in different parts of the province including Newcastle.

COSATU’s KZN general secretary Edwin Mkhize said their picket aimed to shine a light on corruption, job losses and the high rate of gender-based violence. “We are happy that there are some individuals who have been arrested [for corruption] but we are calling for more arrests. People who stole from the government during the lockdown have to be brought to book,” he said. Mkhize said they would also give petitions to the provincial premier, Business Chamber, Labour Department and CCMA.

Next:  Call for transparency in appointment of new Lottery boss