Slap on the wrist for police commander who ignored torture allegations

SAPS failing to enforce discipline in its ranks 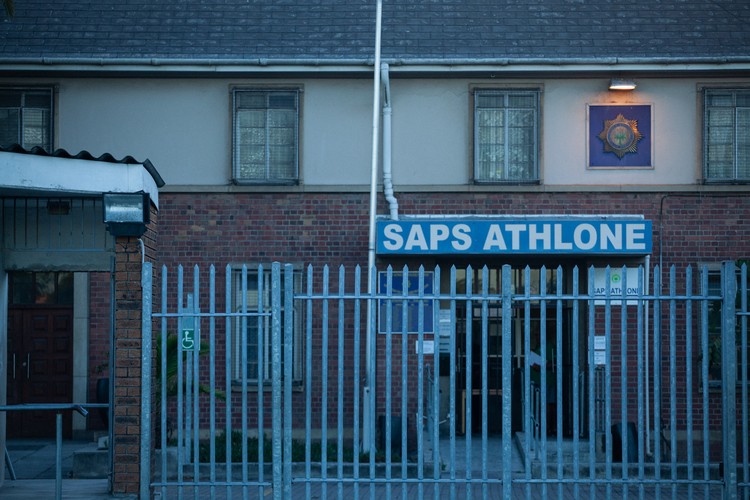 The station commander at Athlone SAPS was found guilty of misconduct for failing to act on torture and murder allegations against officers on his staff. He was given a “verbal warning”. Photo: Anton Scholtz

The South African Police Service (SAPS) has found Athlone station commander Colonel Mark Adonis guilty of misconduct for failing to act on torture and murder allegations against officers on his staff. He was given a “verbal warning”, according to former police commissioner Khehla Sitole, who was responding to a parliamentary question.

A conviction of this type is extremely rare within the police, and remains so even after police management’s recent warnings of punishment for commanders who fail to act against colleagues accused of violence. No other commander has been departmentally convicted in recent months, said spokesperson Major General Mathapelo Peters during an interview with Viewfinder and Carte Blanche in late February.

The lightness of Adonis’ sanction also throws into doubt the seriousness of police management’s warning to commanders who turn a blind eye on abuses by their staff. The warning was contained in a circular issued by head office in October.

Last week, newly appointed national commissioner General Fannie Masemola said his priorities include strengthening “community-police relations” and improving the “integrity” of police members. Viewfinder submitted a query to SAPS, asking Masemola’s views on fixing the police disciplinary system, the failure of which is a major driver of police abuse, of lack of accountability and of public distrust. His office did not respond.

Athlone station commander Adonis came under departmental investigation after Viewfinder published an article which showed he failed to initiate an inquiry into the torture and subsequent death of 36-year-old Adam Isaacs, from Athlone, in February 2020. Some of those suspected of torturing Isaacs worked under Adonis.

We also reported that Adonis had a history of failing to properly discipline one of the implicated police officers – Sergeant Giovanni Gabriels – despite repeated allegations and findings against him.

We also revealed the free rein given to repeat offenders and the persistence of brutality, specifically the torture of people in custody by police, remains systemic within SAPS.

A test case for accountability

Police discipline regulations and National Instructions task police commanders with initiating investigations into torture and other misconduct allegations made against their staff. But commanders routinely fail to do this, opting rather to outsource cases entirely to the Independent Police Investigative Directorate (IPID), while leaving the suspects on duty.

Within this context, the investigation into Adonis was a test case for police management. However, in handing down a “verbal warning” to Adonis, police management appear to have ignored their own circular’s railing against “inappropriate and excessively lenient disciplinary sanctions”.

According to police discipline regulations, a verbal warning is struck off an offending officer’s personnel file within six months. This means that should Adonis again fail to act on serious allegations against his staff from around August or September this year, the verbal warning he received will not be taken into consideration as an aggravating factor.

In an interview with Carte Blanche anchor Derek Watts, an officer at Athlone SAPS station said that Gabriels, Adonis and other officers upheld a culture of brutality and non-accountability at the station.

“They turn a blind eye,” the officer said. “It’s too much paperwork, it’s too much to do … and the violence just goes on.”

The officer was astonished last week to hear Adonis had received only a “verbal warning” and described it as a “nothing” sanction. The officer called on an incoming national commissioner to “be more firm” and stamp out such behaviour at station level.

Sean Tait, the director of the African Policing Civilian Oversight Forum (APCOF), said that the verbal warning issued to Adonis was “positive albeit lenient”.

“The responsibility of management to prevent abuses [such as] torture cannot be taken lightly,” he said.

“We have seen a steady decline in discipline management in SAPS over the last years… Unless SAPS is able to reverse this trend the credibility deficit will persist.”

Peters said that since the October circular was issued police management has observed a significant “improvement” in commanders’ compliance with their duties to enforce discipline. Asked to substantiate the claim, Peters provided no evidence to back it up.

In November, Viewfinder showed that the circular probably had little effect on station commanders’ attitudes to allegations of brutality made against their members.

Adonis’s case was handled at district level. Peters did not respond to a query asking whether head office agreed with the outcome and sanction. Adonis has consistently declined to comment on Isaacs’ death, his failure to act and the case against him.

Sitole’s parliamentary response also revealed that a disciplinary hearing for Sergeant Gabriels is still pending. After the broadcast version of Viewfinder’s exposé on Gabriels, which aired on Carte Blanche in January, Athlone police management scrambled to gather witnesses for Gabriels’ disciplinary hearing.

Adam Isaacs’ sister, Ashia Mohammed, and another witness to Isaacs’ alleged torture, Shamiel Gamieldien, say that a captain from Athlone police station called to recruit them for participation in Gabriels’ disciplinary hearing. More than two months later, these witnesses say they have not heard back from the police.

Sitole’s parliamentary response addressed the fact that Gabriels was not placed on precautionary suspension, after Adam Isaacs’ torture and death. Sitole outlined factors which may inform a decision to suspend an officer, such as the seriousness of the alleged misconduct and the likelihood of the officer reoffending. Yet, his response did not explain why Sergeant Gabriels, an officer implicated in the torture of a suspect, who was on a final written warning for assault at the time, following a string of prior assault allegations against him, was not suspended.

Sitole said only that, after Isaacs’ torture and death, there “were no clear facts that necessitated the immediate institution of disciplinary steps or suspending the member”.

Gabriels remained on duty and was transferred in 2020 to his current posting at Lamberts Bay on the west coast.

Last year, one of his colleagues there deposed an affidavit expressing amazement that Gabriels remained undisciplined and armed with a service pistol, given his track record.

He has been accused of at least three other assaults. In November 2020, Lamberts Bay resident, Gayno Donn, accused Gabriels of shooting at him as he ran from the police, and of later beating him up at the police station. In January 2021, Dawid Hendricks, a handyman with the Cederberg municipality, accused Gabriels of assaulting him for breaking curfew.

Last month, he was also accused of pepper spraying, pointing his service firearm, and threatening to shoot Graafwater resident Chris Claasens outside a service station.

Gabriels has not responded to queries about these and other cases against him, but Claasens spoke to Viewfinder over the phone. He said that Gabriels confronted him over a traffic violation and then threatened to shoot him, with his gun drawn and cocked, during an ensuing argument. Claasens opened a case at Graafwater police station, but has not received any feedback. SAPS in the Western Cape has not responded to Viewfinder’s queries about the case or the status of other disciplinary proceedings against Gabriels.

Minister to be briefed on need for amendment to discipline regulations

Following the first articles in this series of reports, the Civilian Secretariat for Police Services (CSPS) committed to review the regulations. CSPS then made a submission to the Minister, requesting that the regulations be tabled for review and amendment at the police’s bargaining council.

Police minister Bheki Cele’s spokesperson Lirandzu Themba confirmed he has requested a briefing on the matter from the CSPS.

Regulations, policy and law can only go so far. It will be up to the new national commissioner to show leadership and political will if repeat abusers and commanders who cover up for them are to be brought to book.

Spokesperson Major General Mathapelo Peters said police will respond to Viewfinder’s queries. No comment had been received at the time of publication. Police comment will be added when it is received.

This article was produced by Viewfinder with assistance and editing by GroundUp.

Next:  300 learners, five classrooms, no toilets at this Eastern Cape school

Previous:  Nine years later, these classrooms are still under construction