Wednesday of discontent: workers picket around the country 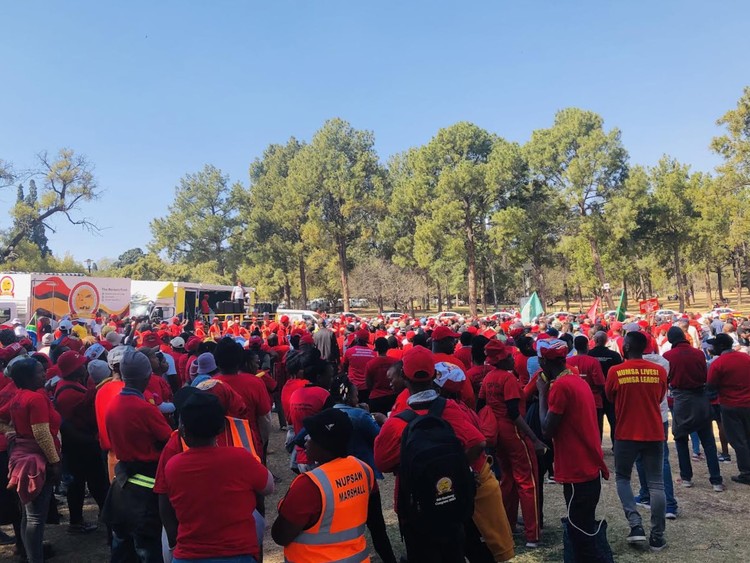 Hundreds of union members and supporters marched in Pretoria on Wednesday demanding measures against the high cost of living. Photo: Kimberly Mutandiro

Members of unions affiliated to the Confederation of South African Trade Unions (COSATU) and the South African Federation of Trade Unions (SAFTU) brought the Pretoria city centre to a standstill on Wednesday as they marched to the Union Buildings. The workers were taking part in nationwide protests against the high cost of living, unemployment and other social issues.

Lists of demands handed to government officials at the Union Buildings, included higher taxes on the rich, a Basic Income Grant of R1,500 a month, more jobs, and action on climate change.

“People can barely survive. The cost of living is beyond reach of the working class. We are getting deeper and deeper into levels of poverty which we have never experienced before. During apartheid we fought to have a better life for all but this democracy is failing the masses of this country. The government must do something,” Sebei said.

Regional Chairperson of the South African National Civic Organisation in Tshwane, Abraham Mashishi, said the ANC would lose power in 2024 if the needs of the people were not addressed.

“This issue does not affect the working class only but many other families out there who are now distressed financially. The government is government by the people and it’s high time that they listen. The same people who vote for the government are having to protest to get the government to listen. If the issues are not addressed come 2024, the ANC will see flames, that’s what we are promising.” 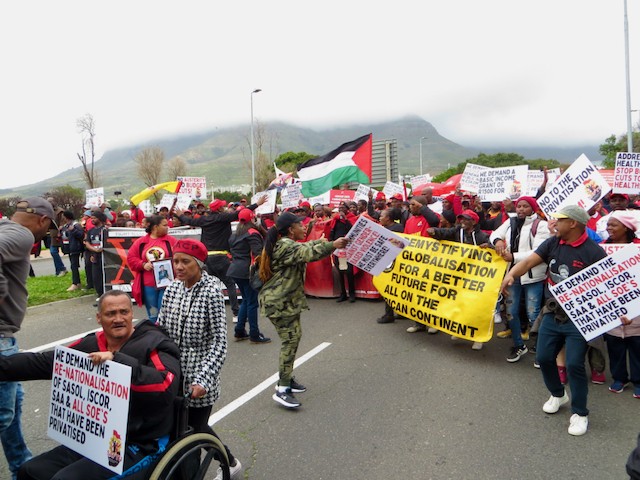 In Cape Town, workers handed over a list of demands at Parliament. Photo: Vincent Lali

About 400 people marched in Cape Town on Wednesday as part of the union-led national shutdown.

Among their demands, they want government to subsidise the taxi industry to reduce fares; to introduce a basic income grant of R1,500; and to fix Eskom and end load shedding.

Ntlokotse urged citizens not to direct their anger over unemployment and other social ills at immigrants. “Let us not take our anger and frustration on our black brothers and sisters. Let us direct our anger at Parliament,” she said.

When a young, junior official came out to receive the memorandum and refused to say anything, one of the demonstrators shouted, “He is just a boy.”

“The President was supposed to assign a minister to receive the memorandum,” said Ntlokotse.

Before the march to Parliament, a protest was held outside the Cape Town Civic Centre. Mayor Geordin Hill-Lewis came out to receive the memorandum.

COSATU Western Cape Provincial Secretary Malvern De Bruyn said the protesters wanted the cost of train tickets to be reduced by 50% until the trains are fully operational. He said 12 guards should be deployed at each station “to create a safer environment for commuters”.

NUMSA Regional Secretary Vuyo Lufele spoke out against hikes in electricity tariffs and opposed the privatisation of electricity generation.

Vanessa Nelson, founder of Hope For the Future and Chairperson of the Heideveld Residents Association, said, “Pensioners and residents who live off government grants can’t afford to buy food anymore in Heideveld as they can’t cope with recent food price increases.” 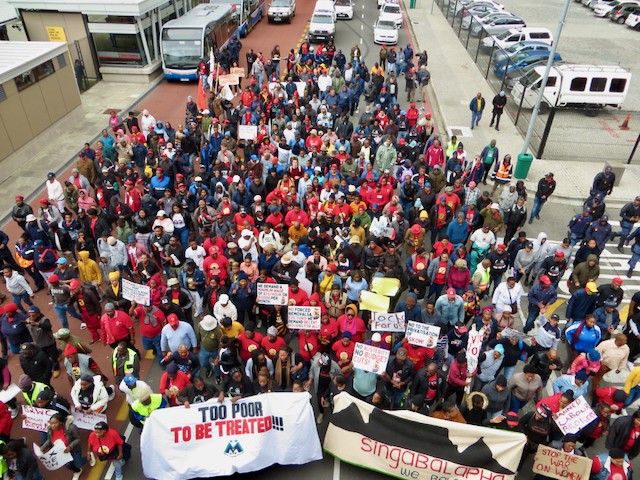 Protesters gather outside the Cape Town Civic Centre on Wednesday. The cost of living and the failure of Metrorail in the city were major issues motivating the march. Photo: Vincent Lali

Next:  Independent Media responds to GroundUp