“Bring back the money”: picketers shout at suspended SJC activist outside court 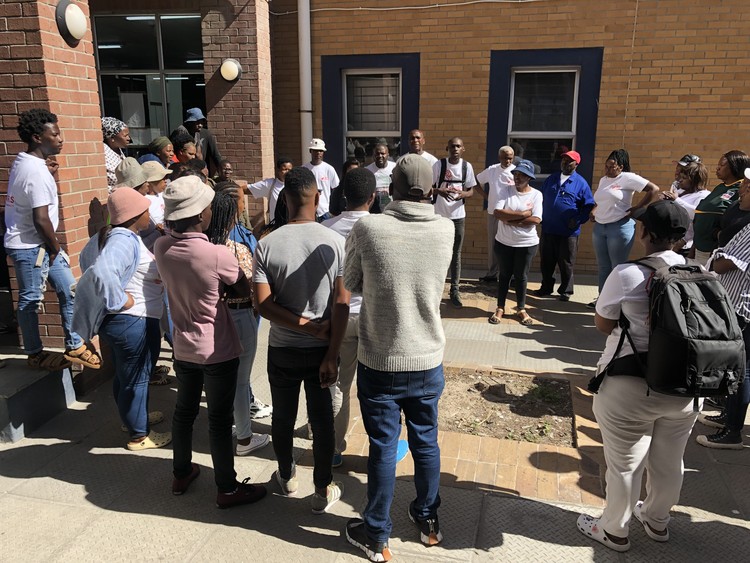 Members and supporters of the Social Justice Coalition (SJC) filled the public benches in court on Thursday for the trial of suspended general manager Xolani Klaas.

Klaas, who stood in the dock briefly at the Khayelitsha Magistrates Court, faces charges related to fraud in excess of R730,000. This was his second court appearance.

In June, a GroundUp investigation revealed that Klaas appeared to be using SJC funds to pay for furniture and household appliances, luxury clothes, watches, groceries, and expensive technology, totalling hundreds of thousands of rands.

Klaas was suspended and SJC staff laid criminal charges against him at Lingelethu West Police Station at the end of June. In July, GroundUp reported that Klaas had returned some furniture to the organisation’s offices that was purchased using the SJC’s funds.

On Thursday, about 50 people picketed outside the courtroom while those who were able to get seats inside waited for Klaas to make an appearance. Only 30 people were allowed inside the small room. He made a brief appearance and the prosecutor asked that the matter be postponed to December to allow time to compile “outstanding information” and complete “an ongoing investigation”.

Outside, some SJC members stood on the steps of the court, holding placards which read: “Down with Xolani Klaas”, “We want the communities’ money back” and “Bring back the money Xolani”.

Klaas was seen leaving through the court’s back exit. He quickly got into his car and drove off. Picketers pointed at him and shouted “Give us the money!”

The SJC’s political educator, Bonga Zamisa said, “Although the process is taking longer than anticipated, the SJC is happy to see that the right steps have been taken to hold Xolani Klaas accountable for his actions.”

“The SJC is also grateful that the community has remained united during these hard times, and have once again shown their support for the SJC’s work today,” said Zamisa.

Klaas is due back in court on 1 December.

Next:  Stolen toilets sold to desperate families in Cape Town