Police accused of extorting money from immigrants during raids in Johannesburg 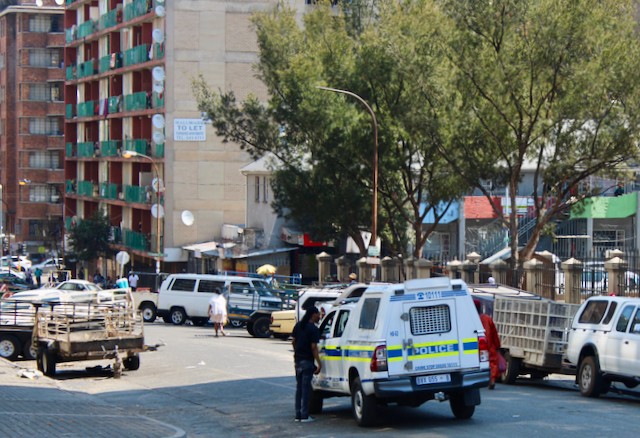 A police van patrolling in Hillbrow where many immigrants live. Photo: Kimberly Mutandiro

A woman from Bulawayo says she hid in a ditch in Johannesburg with her child last Friday when she saw a police van stopping nearby, so that she wouldn’t have to pay a bribe. She lost her asylum document five years ago. When police previously arrested her in Pretoria, she paid a bribe of R100 to be released.

“Police are making a business of these arrests, taking anything between R100 and R3,000, depending on your luck,” she said.

She said she had to pay bribes of R700 each for two relatives who were arrested on their way to church two weeks ago.

“The cops also accept e-wallets and can even accompany you to the ATM machine,” she said.

Immigrants living and working in the inner city of Johannesburg say police constantly harass people asking for documents and often demand bribes if the documents can’t be produced. Some of the people who say they paid bribes gave us their names and permission to photograph their faces, but we have decided to keep them anonymous as we fear they will be victimised.

Police and immigration officials conduct a weekly joint operation, and police are also setting up roadblocks almost daily and demanding to see identification. Raids are also being conducted on immigrant-operated shops, hair salons and other businesses.

Those who cannot produce documents are forced into police vehicles and taken to Johannesburg Central or Hillbrow police stations.

Gauteng SAPS Provincial Spokesperson Captain Mavela Masondo confirmed that police are conducting weekly operations all over Gauteng, but said it was part of Operation Okae Molau, a crime prevention initiative.

“As police we do not process undocumented foreign nationals or illegal immigrants, which is a mandate of Home Affairs. In all operations we are joined by Home Affairs. We only assist them to arrest and hand over everything to them. They then process and take them to Lindela for deportations,” said Masondo. “As police we are not allowed to release undocumented foreign nationals. If they bring documents, only immigration can verify them.”

“If there are allegations of police asking for money they must come forward and open cases against police officers because that is totally against the law.”

But Lawyers for Human Rights’ says its Detention Monitoring Unit has received allegations of bribery demands. The Unit says it is dealing with several cases where asylum seekers and refugees are being detained due to expired permits, despite showing proof that they have applied for asylum, or when they have left their valid documentation at home.

“The lack of documentation has always been a challenge for migrants,” says Tumelo Mogale, candidate attorney at the Detention Monitoring Unit.

“We have seen a number of people being arrested and detained for being in possession of expired permits, while others did not have a permit at all. This was because of the closure of Home Affairs offices during [Covid] lockdown.”

He said the arrest of immigrants who showed a clear intention to apply for asylum was a violation of the Refugee Act. He said many immigrants face arrest because Home Affairs takes so long to respond to their applications online.

“One client informed us of the police asking him to pay a R2,000 bribe before he could be released. Unfortunately, the client doesn’t know the officer’s name,” said Mogale.

Immigrants working in areas around Noord Taxi Rank say the area has been targeted by police. Roadblocks have been erected for the past three weeks.

A man from Bangladesh said he and three men from Malawi were placed in a police van and told to “make a plan” if they wanted to be released.

“I told them that l am not illegal but am only struggling to renew my asylum, which expired during the lockdown,” he said. “But they demanded R500 each from the four of us.”

He said he refused and demanded to be arrested instead. He also threatened to report the police. He was released, but the three Malawians with him paid up since they had no papers at all, he said.

“They keep coming and taking money,” he said. “We are no longer afraid of thieves, instead we are afraid of the police.”

A woman from Mozambique said she was handcuffed three weeks ago and taken to the central police station. She was asked to pay R500 for her release.

“The R500 they took was all l had to send home to my children. Now, it’s not easy to make that amount, because if it is not the police chasing us, it’s the metro cops confiscating our goods,” she said.

Another man from Malawi said he paid R2,000 for the release of his undocumented brother. “When we apply for documentation, they do not give. Now police are using the opportunity to make money out of us,” he said.

Immigrants arrested because their Zimbabwe Exemption Permits are out of date are later released by the courts, says Ethel Musonza, from the organisation Zimbabwe Isolated Women in South Africa.

“Every day we receive reports of our neighbours in the dark buildings [in the inner city] being arrested and detained at the police station, sometimes leaving children including suckling babies with no one to look after them. This in itself constitutes abuse of women and children,” said Musonza.

“People are now afraid to go to church, to take their children to school, to go to the shops or run their business because police are everywhere,” she said.

Comment from Home Affairs will be added when it is received.

Next:  “Ubuntu is alive” and it sounds like marimbas