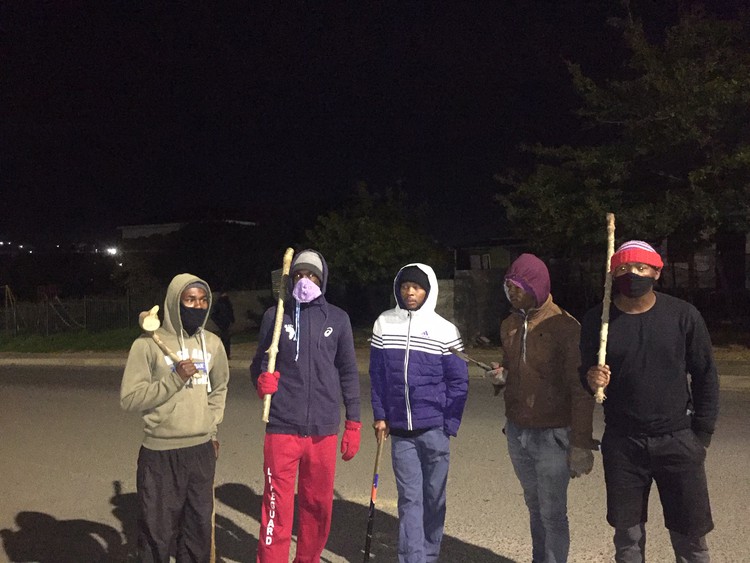 A group of young men from Kayamandi in Stellenbosch have started waking up at 4am every morning from Monday to Saturday, to patrol the streets and protect residents on their way to work or school.

The group visits taxi ranks and shuttle points throughout Kayamandi.

“Some people are even making appointments to be escorted through the dark streets,” says group member Earnest Mokapane.

Sabelo Gaba, another of the team’s 10 members, says robberies have decreased since the patrols started. All the members are volunteers. Five have full-time jobs.

Mokapane is clear that the group functions as a neighbourhood watch. They don’t beat or go searching for suspects. At a community meeting it was decided they should “detain” any perpetrators until the cops arrive, but so far they haven’t had any such encounters.

Avela Siphumze, a grade 12 student, said she used not to feel safe walking home from the library or a study group session. With the patrols she feels safer. “I think it’s because these tsotsis are now realising that it won’t be as easy as before.”

At a recent meeting called by community leader Bishop Mbulawa, many community members and taxi drivers have welcomed the patrols. But, says team member Luvoyo Quwe, because the men carry golf clubs, axes, and wooden sticks, some community members assume they are thugs. He hopes that with R50 donations from residents they will be able to purchase reflective jackets, whistles, torches, and walkie-talkies. They also want to recruit more community members into their team.

“We did this back in the day, but we are older and sick now,” says Mbulawa. “It gives me hope that young men in the community don’t wait on the government for their own safety.”

Mbulawa has undertaken to help the young men connect with the Kayamandi police station so that they can work together to tackle crime in the community.

At the meeting, several residents who have been bearing the brunt of xenophobia because they are from Zimbabwe, said they would join forces with the patrol group.

The captain at the Kayamandi police satellite station declined to comment and Western Cape SAPS referred GroundUp to the station commander at SAPS Stellenbosch, who could not be reached via telephone or WhatsApp.