“We won’t allow the Western Cape government to be the only province that doesn’t recognise community health workers,” says Vavi 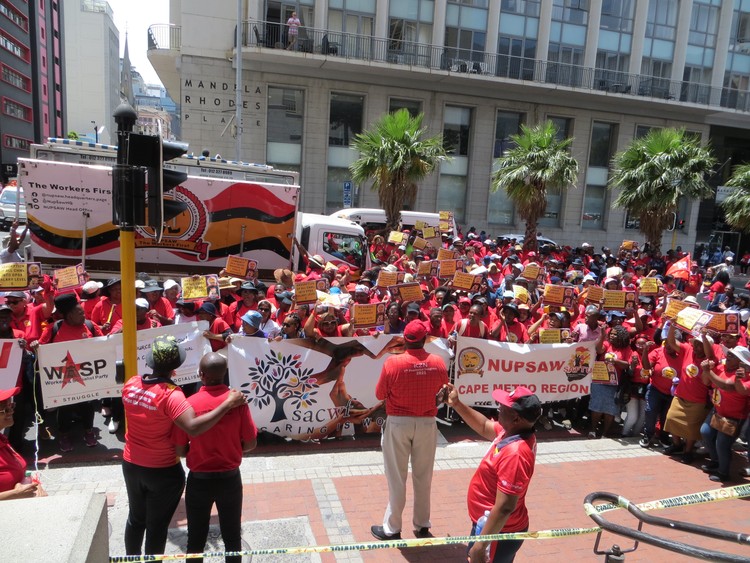 Hundreds of community health workers and union members march to Premier Alan Winde office in Cape Town to demand that they be in-sourced by the Western Cape Department of Health. Photo: Vincent Lali

About 300 community health workers marched to Premier Alan Winde’s office in Cape Town to demand that they be in-sourced by the Western Cape Department of Health on Friday.

During the march, led by National Union of Public Service and Allied Workers (NUPSAW) members, people sang: “Senza nje nxa sifuna imali” (We act like this when we want money) and “[MEC] Nomafrench [Mbombo] causes us worry”.

Sbonile Jeza, national organiser at NUPSAW, said community health workers wanted to be “absorbed into public service” and be placed on salary level 5.

Khanyisa Bunyonyo, Cape Metro chairperson of NUPSAW, said workers also want a danger allowance. “Most NGOs that we work for are not even registered, so we must go to hospital without assistance when you get injured on duty,” he said.

Bunyonyo said they also often work in dangerous conditions and are more likely to contract infections diseases like Covid and TB. For this reason, they also want a danger allowance, he said.

According to South African Federation of Trade Unions (SAFTU) general secretary, Zwelinzima Vavi, the Gauteng government has already in-sourced over 9,000 community health workers as a result of their protests and marches.

Harry Malila as Director General of the Western Cape Government accepted the group’s memo on Winde’s behalf. He said: “Thank you for putting your issues in writing. We will definitely respond.”