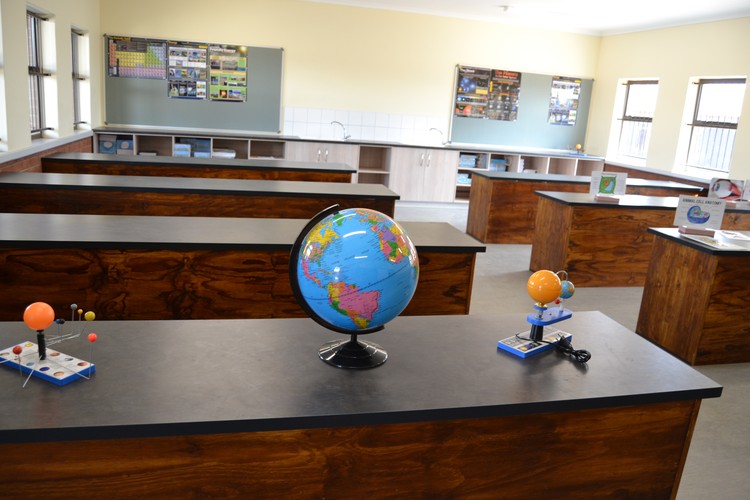 The science lab at the newly built Noninzi Luzipho Primary School in Gunguluza, KwaNobuhle in Kariega was officially opened earlier this month. Construction of the new school started in 2017 after protests by parents because learners were in prefabricated structures. Photo: Thamsanqa Mbovane

The newly built Noninzi Luzipho Primary School in Gunguluza, KwaNobuhle in Kariega has officially been handed over to learners and the community.

While most learners have been attending classes at the new school since February, construction of the R63-million building was finally completed recently following several delays. The school was initially established in 2004 by unemployed teachers who volunteered their time to start a “night school” in the community.

Construction of the new school started in 2017 after protests by parents in 2014. In May 2019, we reported that workers at the new building site downed tools. At the time, workers said 22 of the 27 new classrooms had been completed.

In March 2021, GroundUp reported on a protest by parents who shut down activities at the old prefabricated school, demanding that the Eastern Cape Department of Education complete construction of the new building. Parents then demanded that their children be moved to the new school in February this year while minor construction was being completed.

Spokesperson for the Eastern Cape MEC of Education, Vuyiseka Mboxela, also confirmed that the school was delayed by protests.

During the handover by Eastern Cape MEC Fundile Gade earlier this month, principal Vuyani Singeni, said the school’s 1,081 learners now have 29 classrooms, three of them for grade R classes. Each class takes around 45 learners, he said.

“Our new school also has a library, a science lab, a spacious kitchen, and a parking area,” he said.

However, School Governing Body (SGB) chairperson, Aletta April noted that the school did not have a hall as had been promised. “The hall was part of the plan but the Department said at the time that it had no money. We really need a hall. The whole of Gunguluza has no community hall,” said April.

Another parent, Mzukisi Sitoto, said: “This school also needs to have a gardening project, fields for soccer, rugby and cricket. We have never had proper fields.”

Speaking at the event, MEC Gade promised that the department would return to build a hall for the school.

Next:  Covid: Vaccine drive is running out of steam