We travel to Harare with returning Zimbabweans 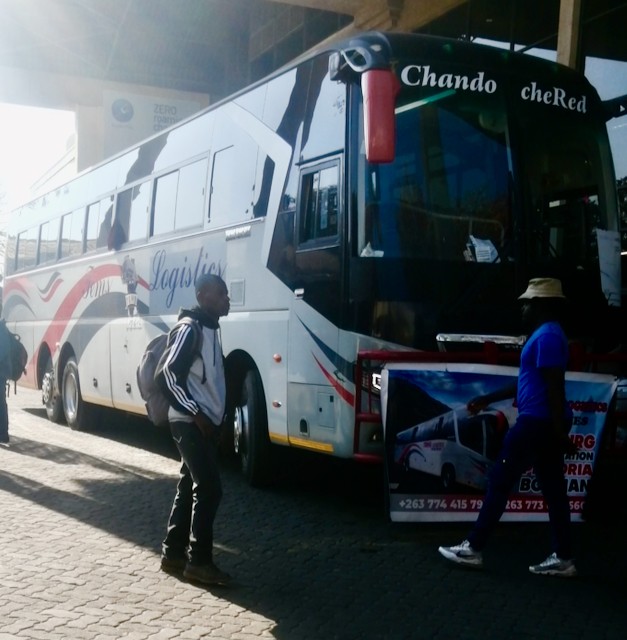 With the expiry of the Zimbabwean Exemption Permit (ZEP), almost all holders of the permit, about 180,000 Zimbabweans residing in South Africa, will find themselves undocumented as of 1 January 2023. They have a stark choice: return to a broken country or continue to live illegally in South Africa.

GroundUp wanted to know how people are dealing with this situation. So we joined Zimbabweans on a bus from Gqeberha to Zimbabwe, passing through East London, Bloemfontein, Johannesburg and Pretoria, last week.

We embarked from Gqeberha at 2:30pm with 15 passengers and a crew of six. Our tickets included a two-piece KFC box. A prayer was said by one of the passengers.

At the Port Elizabeth Railway Station, an informal trader selling fruit, saw us off, shouting, “Go back to your country and please don’t ever return.”

“That woman will definitely lose her business if foreigners are deported, because we are her customers,” grumbled Selby Mukwashi inside the bus.

Another passenger said sarcastically, “Thank you South Africa for having given me the opportunity to see the ocean and ships. I am from a landlocked country. I will not return because the ANC government has turned xenophobic. They have lost the confidence of the people because of their corruption and are now blaming foreigners for their failures.”

A ZEP holder, he was now leaving after 20 years as an informal trader in South Africa.

Meanwhile Mukwashi added, “There are shop owners and landlords who are dependent on foreign immigrants for their upkeep.”

He was a tractor driver on a farm in Hankey for 15 years. At first he had an asylum paper, but this was rejected three years ago. “They said there was no war in Zimbabwe,” said Mukwashi.

Returning to Zimbabwe will be a big adaptation for his children, born in Gqeberha and fluent in Xhosa but not in Shona.

“I will have to go to my rural home first while looking for a place in Harare so that my children will go to a better school,” said Mukwashi.

We arrived in East London in the evening. About ten more people boarded with lots of luggage. We carried on to Aliwal North and Bloemfontein. By then there were 40 passengers.

“There are no job opportunities for me in Zimbabwe,” said Margaret Munyuki, who was retrenched in July after six years as a shop merchandiser in Kariega. She was taking her household furniture to Mutare for “safety” but vows to return to South Africa.

“Xenophobic sentiments can spread to this province as time goes on. I don’t want to have my furniture destroyed or damaged,” she said.

A young man, who wished to stay anonymous, had graduated in 2021 with a Diploma in Mechanical Engineering from Nelson Mandela University. His work permit application was rejected. He was on his way to Masvingo.

“My father has a plot and he has been encouraging me to come back home. I am still [too] young to go into farming, but I don’t have any option,” he said.

We arrived at Park Station, Johannesburg, the next morning and we were told not allowed to go shopping because Home Affairs and the police were conducting an operation. We were given pap and meat and proceeded to Bosman Taxi Rank in Pretoria.

Here, a comedian got onto the bus and entertained passengers while he sold samoosas and made observations about Zimbabwe and South Africa.

Another 30 people boarded the bus, everyone with bulky luggage.

At the stop in Musina we spoke to Mohammed Mousa, a shop owner. He said he was concerned by the drop in Zimbabwean shoppers.

“The travel restrictions are affecting not only my business but most shop owners here in Musina. Since the tightening of travel conditions in the last few months things have been very difficult for me and other companies in Musina. There were customers with valid documents who used to buy from me but have since stopped because they are now afraid to cross the border.

“We appeal to the government to discourage xenophobia. I have on several occasions witnessed foreigners being scolded, while others were physically attacked in broad daylight because they were not South Africans.”

We arrived at the border at night. People without valid documents paid a R400 “border-jumping fee” to the drivers, who said they would pass the money on to the Zimbabwe police.

We then left for Harare. The mood in the bus was very sober. People discussed the December deadline.

Miriam Mukondo said, “I am done with South Africa. I have collected my last household items from Pretoria and will soon do a course with Red Cross. I want to go to the UK where my sister stays. There are better opportunities there than in South Africa. There is no high crime and there is little violence in the UK compared to South Africa. If one door closes, another opens. This is my message to Zimbabweans.”

We arrived at High Glen Shopping Center, Harare, the following day around 11 am.

Next:  Meet Dunoon’s gardeners with disabilities