Fed-up with piles of rubbish, residents clear their own streets 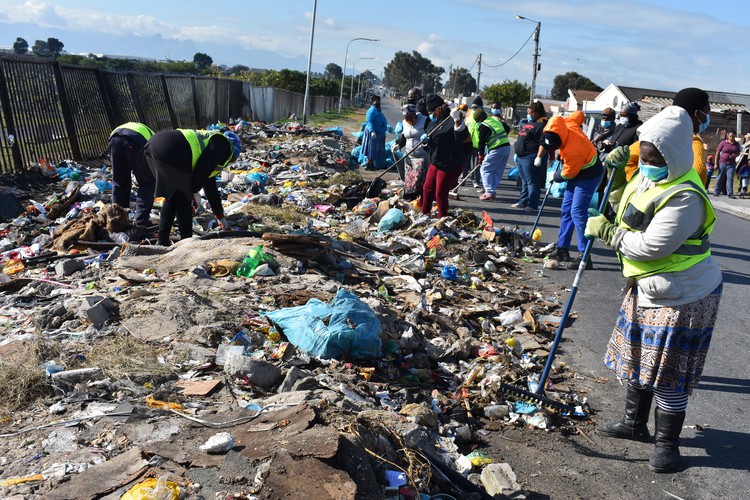 Residents of KTC in Cape Town have rolled up their sleeves to clear uncollected rubbish that had been piling up near their homes.

On Friday, community leader Lumkile Msila joined about 50 other residents who were fed-up with waiting for the City of Cape Town to respond to their complaints.

Msila said community members were worried about their health and the bad smell from the rubbish. “No one had a problem coming and cleaning the streets of KTC. We are also urging residents from other areas to stop making our place a dumping ground. They need to respect the graveyard; they also used to dump rubbish there,” said Msila.

Liziwe Bobo, 55, said: “We spoke to our community leader on how we can clean our area because it has been more than two months since the rubbish started piling up.

She told GroundUp that they are trying to prevent other people from dumping in the area. “At least the City should meet us halfway when they finally get the service provider. They need to start by employing people who were cleaning the streets while they were still busy with the hiring process,” said Bobo.

Ward 39 councilor Khaya Yozi (ANC) said the City was finalising the appointment of cleaners for the community. “We are still waiting for the City and that is why we have [irregular] cleaning and for the time being communities are cleaning their areas,” said Yozi.

Mayoral Committee Member for Water and Waste Xanthea Limberg said the area was normally cleaned more frequently, however, due to the lockdown, there were delays in appointing a new contractor. The old contractors’ contract ended on 30 June. “Duties for the new service provider resumed on 3 August.”

“With this in mind, we ask residents to report illegal dumping to the City’s solid waste enforcement unit so that action can be taken”, said Limberg. This can be done by calling 0214006157 or emailing [email protected].

People found dumping illegally face a fine of up to R5,000. Their vehicles can be impounded, with a release fee of R8,426 for the first impoundment and more for further offences, she warned.

Next:  Hundreds queue outside post office for Covid-19 grants