Start of stalled housing project a victory for Plett community

Two months ago Qolweni residents shut down the town, demanding answers about the project 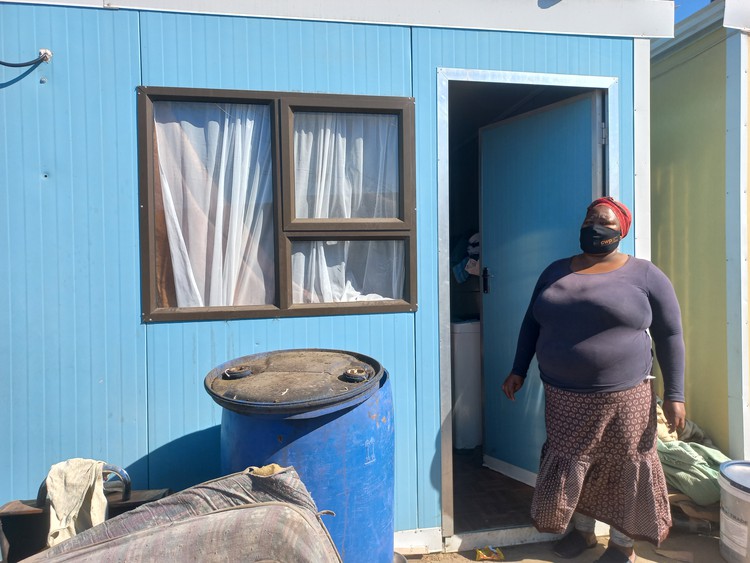 Qolweni resident Nomathamsanqa Ngene says she has been waiting 25 years for her own house. Photo: Siphokazi Mnyobe

The community of Qolweni in Plettenberg Bay breathed a sigh of relief as construction on a stalled housing project started on Monday.

This comes nearly two months after hundreds of residents of informal settlements embarked on a four-day protest, demanding to know why the project had been delayed.

Nomathamsanqa Ngene, whose household is one of 169 to benefit from the project, told GroundUp that she was excited that she could soon live in a safe home of her own. Ngene currently lives in a shack. “I’ve been a resident in Qolweni for 25 years, dreaming of a proper house to stay in with my family. I lost most of my furniture moving from shack to shack,” she said.

“It rains a lot in Plettenberg Bay and my kids sleep on the floor. The kitchen becomes a room at night and we share toilets with the community.”

Zuko Molose said the start of construction was a victory for those who have been fighting for housing. “I’ll be happy on the day I see the project finished and people inside their houses”.

The project was approved in October 2019 but due to delays such as the Covid-19 lockdown last year was rescheduled to start in January 2021. But by June it had not started, and angry protesters closed the N2 between Knysna and Plettenberg Bay, paralysing businesses and leaving workers and learners who commute daily on this route stranded. The municipality handed over the housing project to the provincial department following complaints by the community.

On Monday, Western Cape Human Settlements MEC Tertius Simmers held a sod-turning event. He said “the most vulnerable, particularly the elderly and those with medically certified disabilities will have an opportunity to live in improved and safer conditions”. He urged those involved in the project to ensure “that there are no further hindrances or delays”.

According to a press statement by the department, a budget of R33.5 million has been allocated, excluding professional fees.