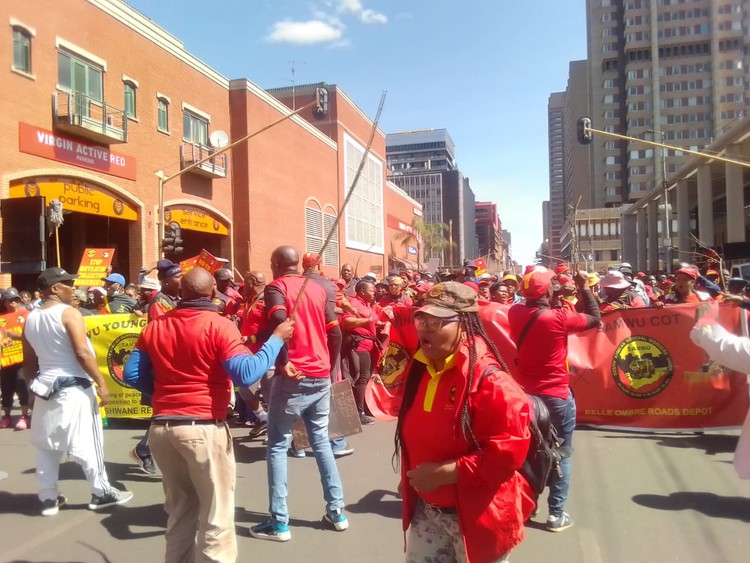 Hundreds of SAMWU members marched in Pretoria on Friday to demand that the City of Tshwane pay workers a 3.5% salary increase. Photo: Ezekiel Kekana

Members of the South African Municipal Workers Union (SAMWU) are giving the City of Tshwane until the end of the week to withdraw its application for exemption from paying workers a 3.5% salary increase.

On Friday, hundreds of SAMWU members marched through the streets of Pretoria’s city centre to the council’s offices.

According to the union, Tshwane municipal workers have not had a salary increment since July 2021. Last year SAMWU and the South African Local Government Association had agreed on a 3.5% pay increase for all the municipal workers at the SA Bargaining Council. However, the City of Tshwane applied for an exemption, blaming financial distress for its failure to honour the agreement.

The City’s exemption plea was dismissed. It has since challenged this by taking the matter on review to the Labour Court. A hearing date still needs to be set.

Union members who took to the streets demanded that the City withdraw its review application and fulfil its obligation to pay the wage hike. The union blames the salary hike delays on Mayor Randall Williams.

In a memorandum of demands, SAMWU called for the immediate resignation of Williams over this issue and other municipal failures they attribute to Williams.

Addressing the workers near Madiba Street, SAMWU regional secretary, Mpho Tladinyane, said that under the leadership of Williams, the City has failed to pay workers their deserved 3.5% increase. He accused the executive of interfering in administrative issues and complained that the City continues to outsource workers and services instead of absorbing union members.

Another issue raised in SAMWU’s memo was the renewal of licence disks for at least 70 municipal buses currently not operating.

Mayco Member for Corporate and Shared Services, Kingsley Wakelin, received the memo on behalf of the City.

Wakelin refused to directly comment on the 3.5% salary hike, only saying that “the City is currently struggling with finances” – to which the crowd loudly booed.

Wakelin promised to address all the workers’ demands with the executive and mayor.