The controversial company, which uses fossil fuels to generate power from ships, claims it will create 240 jobs in the West Coast town 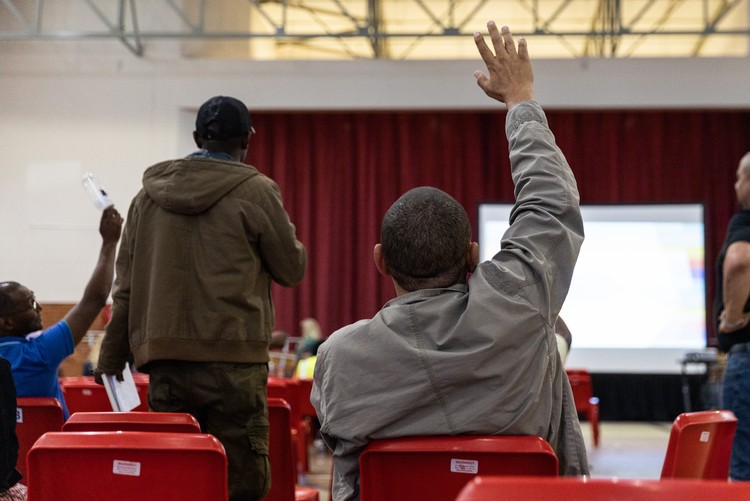 The ayes have it. Saldanha residents voiced their support for the Karpowership deal. Photo: Ashraf Hendricks

At a public meeting held in Saldanha Bay as part of Karpowership’s regulatory requirements, many residents expressed their backing for the controversial electricity-generation deal, despite environmental organisations opposing the “flawed” deal.

Karpowership runs powerships (literally a ship that produces power) that use fossil fuels to generate electricity.

“We support this project,” said Samuel Moorkroof, who was speaking on behalf of the West Coast Black Business Alliance. Moorkroof said that some media reports have claimed that people of Saldanha Bay were wholly opposed to the deal, but that this wasn’t true. He said many people in Saldanha supported the Karpowership project.

GroundUp sat in on the public meeting held in Saldanha Multipurpose Centre on 21 November. About 50 people, including representatives of local business and fishing organisations, attended the meeting and most showed support for the Karpowership deal. One man at the meeting said that he was not in support of the deal.

In March 2021, three Karpowerships, to be based in Saldanha Bay, Coega, and Richards Bay, were listed among eight preferred bidders as part of the Risk Mitigation IPP Procurement Programme (RMIPPPP) of the Department of Mineral Resources and Energy (DMRE) in a 20-year deal worth over R200-billion. In June last year, the Department of Forestry, Fisheries and the Environment (DFFE) refused Karpowership initial environmental impact assessments (EIAs).

Investigations by amaBhungane in May last year suggested that the tender process was rigged in Karpowership’s favour, among other irregularities. In January this year, a court challenge by a competitor that sought to overturn Karpowership’s appointment was dismissed.

Many of the Saldanha residents that spoke in support of the deal noted that unemployment and poverty were widespread, and that the effects of load shedding have exacerbated these problems.

Saldanha Bay is the Local Municipality with the highest unemployment rate in the West Coast District, despite being the biggest contributor to GDP, according to recent statistics.

Public meetings were also held in Richards Bay and Ngqura last week. It was Karpowership’s second attempt to hold public meetings, after the initial environmental impact assessments (EIAs) were refused by the Department of Forestry, Fisheries and the Environment (DFFE) in June 2021. The DFFE found that there were “significant gaps and limitations” in the EIA, that proper public consultation didn’t take place, and that it lacked a necessary underwater noise impact study.

The Green Connection, an environmental organisation, criticised the public meeting, claiming that Karpowership did not directly reach out to fishers in the area to arrange consultations at the most suitable times. The Green Connection did not attend the meeting.

GroundUp asked Neville Van Rooy, community outreach coordinator at the Green Connection, why there was overwhelming support for Karpowership at the meeting. Van Rooy claimed that on the day of the meeting, taxi violence kept some people from attending the meeting, that some fishers who opposed the deal were out on the water, and that they requested another meeting but that this fell on deaf ears.

Natasha Adonis, spokesperson for the Green Connection, said that they are against using Liquefied Natural Gas for electricity generation. Adonis said the “only way to properly address the country’s energy crises is with the help of a clear, well thought-out and inclusive energy plan, which … also takes climate change into account”. She said while they understand that “we won’t switch off gas tomorrow”, the exploration for and extraction of fossil fuels has to stop.

The fishing community seems divided on the Saldanha Karpowership project. Following the meeting, GroundUp spoke to Charlton Swigelaar, secretary of the South African Pelagic Fishermen’s union, who said that load shedding is “hurting” the people of Saldanha Bay.

“With the economic benefits that come with a project as big as this one we will be able to get on our feet. Our communities are struggling and in need of opportunities that can help them get jobs and make money,” said Swigelaar.

He said that Karpowership had explained to concerned fishers the kind of impact the powerships would have on marine life and that they were certain that “[their] livelihoods will be protected”.

Paulina Mali of the Saldanha Bay Black Business Women’s Association also gave the organisation’s support to Karpowership. “Why can’t we get Karpowership? Because at least we will have power and electricity,” she said to GroundUp afterwards.

Karpowership will also be allocating R27.7-million towards skills development in Saldanha Bay with the intention to “ensure increased local employment”.

Dhlamini said that Karpowership is bringing a solution that will help ease load shedding and will also bring jobs to coastal communities.

The deadline for public comments is 13 December 2022, after which the DFFE will have to decide on its approval.

Next:  Pretoria train stations brought back to life after years of closure

On Karpowership bid to set up in Saldanha Bay: Overwhelming support at community meeting? Neither the figure for people attending (50) nor the photograph support that description. None of us should be taken in by the false narrative put out by those intent on short-term gain at the long-term expense of the environment our children will inherit. This cannot be regarded as meaningful community consultation.