School Governing Body member claims school has been asking for transport for ten years, but Eastern Cape government denies it 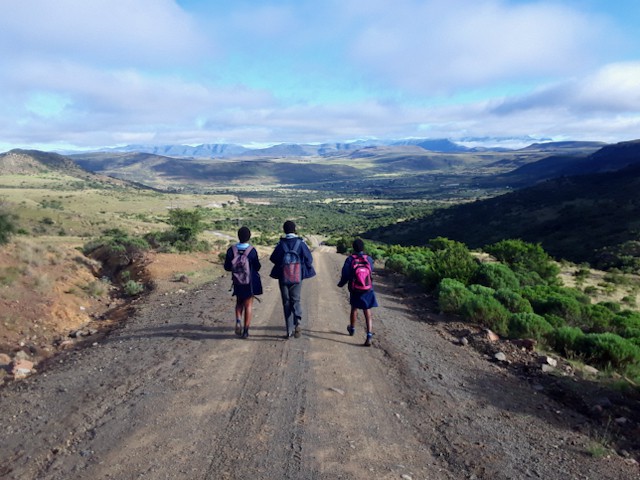 Over 60 children live between five and nine kilometres from Pakamani Senior Secondary in Komani (Queenstown), Eastern Cape. They have to walk to school and back to attend classes. The people of Thembelihle village have been pleading with the education department for scholar transport since 2011, according to a member of the school governing body.

Princess Mbili, grandmother to two boys, said, “They [learners] need to leave their homes as early as 6am in order to be on time.”

‘’As parents we tried to organize our own private scholar transport but due to financial constraints we could not afford it, as we are dependent on SASSA grants,’’ she said.

A Grade 11 learner told GroundUp that some learners received bicycles last year from Lulama Ngcukayitobi, ANC Eastern Cape Provincial secretary, but they didn’t last. They broke on the bad roads and not everyone who needed a bike got one.

“During the rainy seasons we struggle a lot. Some end up being absent. At times we [have to] leave our books at school,” said a grade 9 learner, who complained that this hindered them from doing their homework.

School governing board member Nozibele Jezile confirmed that they have tried since 2011 to get scholar transport. Jezile said the principal had tried to engage with the Eastern Cape Department of Transport but never received a response.

Eastern Cape transport spokesperson Unathi Binqose denied that they had a request for transport from the school.

Eastern Cape Department of Education spokesperson Malibongwe Mtima said they will assist with bicycles in the next budget as there are no funds for scholar transport for the school.

Next:  Union in wage dispute with PRASA

Previous:  Railway regulator CEO and board at war with each other