Union in wage dispute with PRASA

SATAWU wants to be allowed to renegotiate some terms of agreement 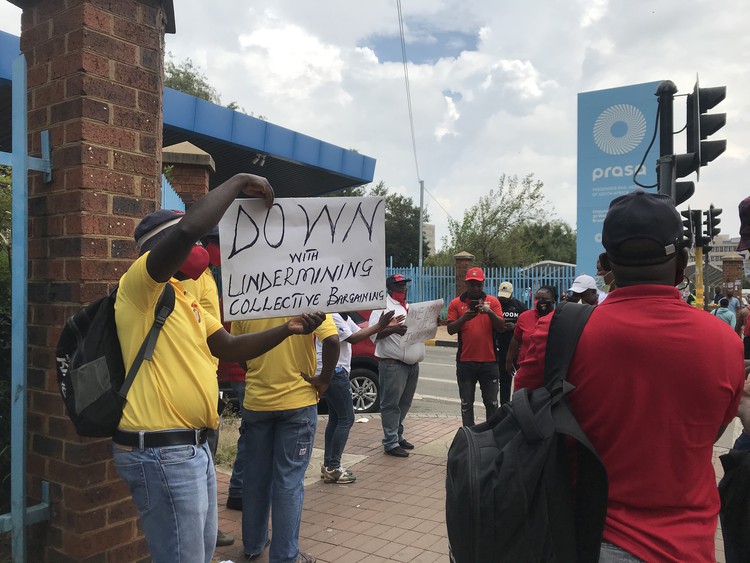 Over two dozen South African Transport and Allied Workers Union members working at PRASA picket outside its regional office at Umjantshi House in Johannesburg on Tuesday. Pickets during lunchtime are expected to continue across the country this week. Photo: Masego Mafata

Members of the South African Transport and Allied Workers Union (SATAWU) at PRASA say they will continue picketing every day at lunchtime until their employer agrees to a wage hike. The union has organised a series of lunchtime pickets this week, accusing the rail agency of undermining collective bargaining rights.

Lubabalo Tinzi, SATAWU’s national coordinator for PRASA, said, “The purpose of these pickets is to send a message to PRASA that they should stop taking SATAWU for granted in collective bargaining.

“During salary negotiations in October 2020, we sought clarity on the validity of a few clauses in the Draft Salary Multi-year Agreement. We had been waiting for a response but PRASA put their foot down by being silent,” said Tinzi.

Last year, both parties agreed to a 5% wage increase for three years — from 1 April to 31 March 2023. However, workers asked to be given an opportunity to renegotiate the increase once the economy was doing better or in the event the business performance of PRASA improved.

A virtual meeting was held between PRASA and SATAWU on 24 March 2020 where PRASA’s management said they would brief the new PRASA CEO on the points SATAWU wanted to clarify, said Tinzi.

SATAWU gave PRASA until 29 March to respond and when it did not, the union decided to picket.

We attended pickets in Cape Town and Johannesburg. PRASA workers in other provinces are also expected to continue picketing on Wednesday, while further negotiations with the rail agency are underway.

In Cape Town, about 30 workers and union members wearing red T-shirts picketed from 1pm to 4pm outside the train station in the city centre.

SATAWU’s Wayne Louw said that PRASA wants the union to guarantee that it will accept the 5% wage increase and that further wage disputes would be put to bed.

“We believe that they can accommodate us when there’s a financial improvement. And that they do have the money even now as they are planning to buy new trains,” he said.

Louw said they will continue protesting until an agreement is reached with PRASA.

Workers held up placards while picketing outside the train station in Cape Town on Tuesday. Photo: Nombulelo Damba-Hendrik

According to Sifiso Ngwenya, a PRASA employee and SATAWU member, part of the initial salary agreement included a clause preventing employees from participating in strikes. “If we sign or agree [without clarity], employees will be affected and unable to exercise their rights,” said Ngwenya.

PRASA spokesperson Bane Ndlovu confirmed that the rail agency had returned to the negotiating table with SATAWU at its offices in Braamfontein on Tuesday.

Ndlovu said PRASA Group CEO Zolani Matthews and SATAWU president Ntuthuzelo Mhlubulwana agreed to continue wage discussions this week. He said more details would be given once they have reached an agreement.