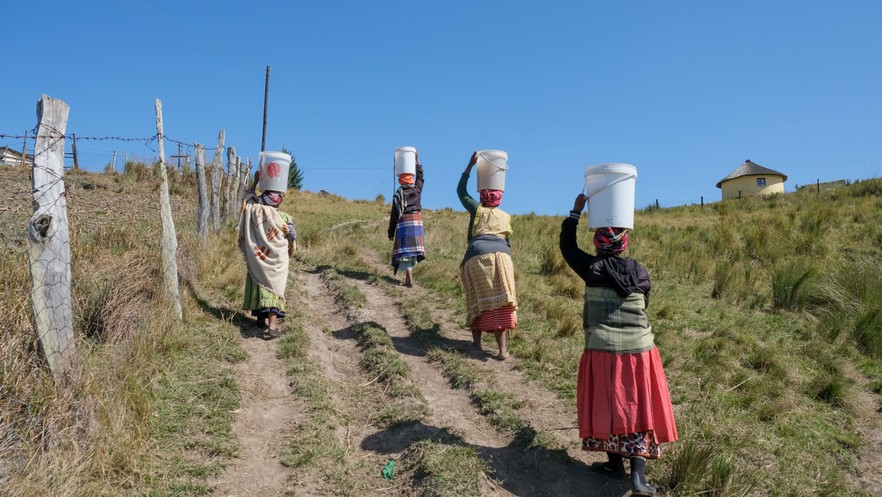 Elderly women in the Amathole collect water at least twice a day from nearby streams and puddles because their taps are dry. Photo: Daniel Steyn

The Mncwasa dam in Amathole, Eastern Cape, is full of fresh water. But taps remain dry in most of the 40 villages that are supposed to receive water from the dam.

The Equality Collective, a non-profit company based in Nqileni village, has joined traditional leaders, ward councillors, and community members, to work with the Amathole District Municipality and fix the ailing water scheme.

The Mncwasa Water Scheme, completed in 2015, was built by the municipality to provide drinking water to 33,000 people at a cost of R125-million. The scheme has a central water treatment plant that pumps water to 31 reservoirs and thousands of communal taps.

But only five years in, due to a lack of maintenance, the scheme started to give problems and it is now barely able to supply water.

“Every day I wake up at 4am to collect water before the cows and pigs get a chance to drink from the stream,” says 80-year-old Nonambala Ngxongonya. She and several other elderly women pointed out the murky stream where they collect water to cook and clean. 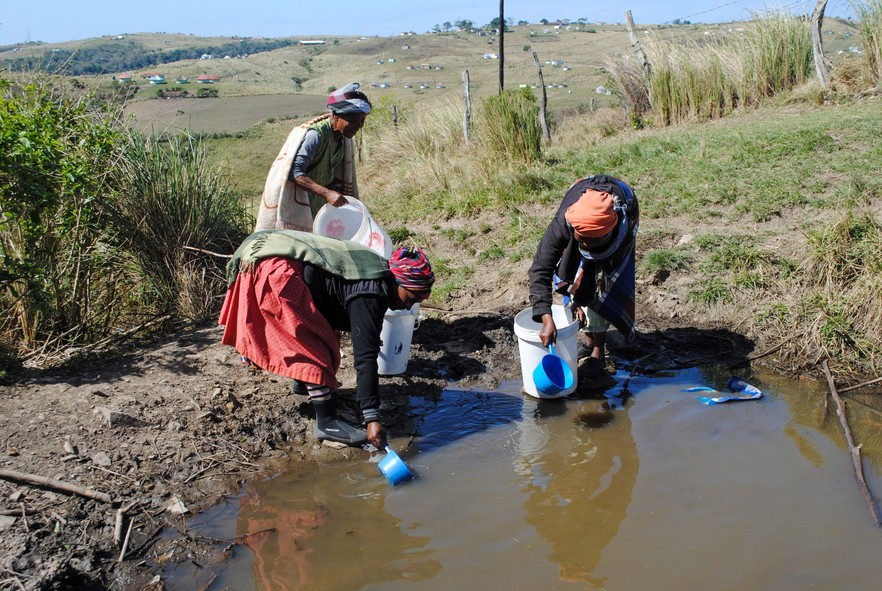 Women from Zwelitsha village wake up early every morning to collect this murky water for cooking and cleaning. Photo: Mkhuseli Sizani

According to residents, taps in the village had been working until two years ago. Community leader Buzman Mdyose said leaks had become common and instead of fixing them, the municipality would often just cut the water supply to leaky pipes.

The right to water is an internationally recognised basic human right enshrined in the South African Constitution. The provision of drinking water is crucial for an improved quality of life and health. It prevents water-borne diseases and other health problems connected to a lack of drinking water.

Rates of infant mortality linked to diarrhoea are high in the area covered by the Mncwasa scheme. There was recently an outbreak of bilharzia, caused by a water-borne parasite and linked to stunting in children.

Throughout the country, large infrastructure projects like Mncwasa are funded by grants from the national government. Operations and maintenance are left to municipalities, which struggle with capacity and depleting budgets. Due to a lack of maintenance, the Mncwasa scheme started showing severe problems in 2020.

The Amathole District Municipality is supposed to provide water and sanitation to almost 900,000 people across six local municipalities, and the Mncwasa water scheme is one of its biggest projects. 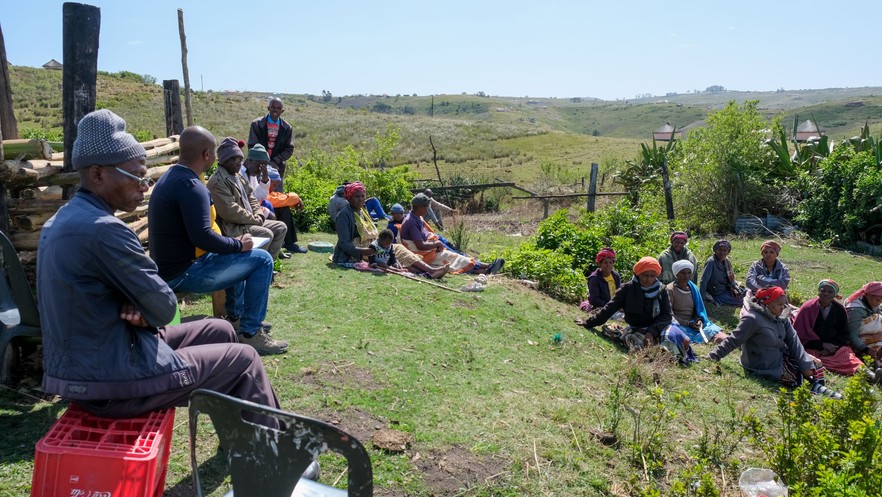 The municipality spent 40% of its budget on salaries and wages in 2020/2021 and only 0.4% on repairs and maintenance, against Treasury guidelines of 8%.

The Mncwasa dam in Amathole is full of fresh water but more than half the households it is meant to serve have no water supply. Photo: Daniel Steyn

It became clear early on that a proper diagnosis of the scheme’s challenges was necessary. A survey of almost 300 interviews was conducted throughout the areas covered by the scheme, by a team of six community members over five days in April last year.

The communal taps where residents can access water had intermittent supply. 33% of the taps that were not working were said to be broken. The survey found a large number of overflowing reservoirs and leaking break pressure tanks, which feed water to the taps. 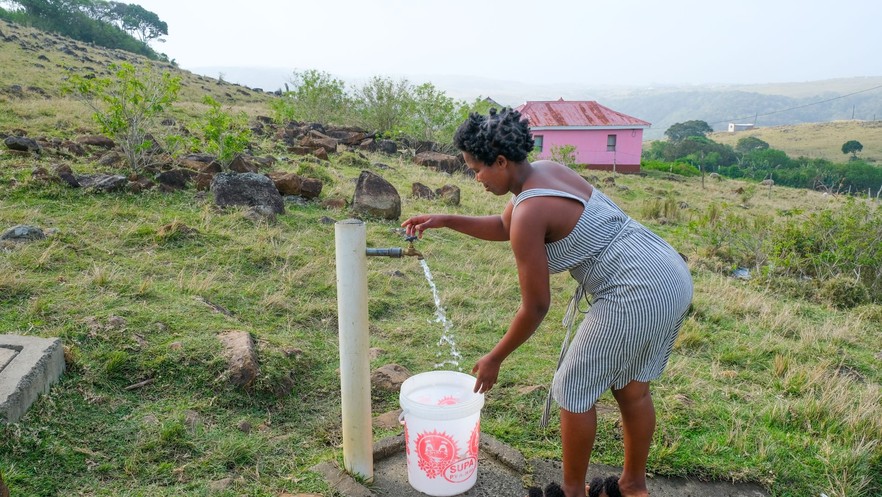 Yola Mandokwini gets clean drinking water from a communal tap - when the taps are working. Photo: Daniel Steyn

The survey also revealed that residents are unlikely to report water outages to the municipality. Only 13% of residents said they had reported an issue, and only 37.5% said that the fault was resolved after reporting.

When GroundUp visited the Mncwasa Water Treatment works in September, only one of the three pumps was working. The Equality Collective’s survey report revealed that there should be two pumps running 24-hours a day for everyone across the scheme to get water.

Data at the time showed that 18 of the 31 reservoirs were not receiving water.

Two engineers analysed the data from the survey and made several recommendations to get the scheme operational again. Two main objectives arose: to raise R8-million to fix the scheme, and to encourage the community to report problems so that issues are resolved swiftly.

The Advisory Committee helped the municipality successfully apply for an R8-million conditional grant from National Treasury. The grant has now been allocated to this year’s budget and the project is part of the municipality’s Integrated Development Plan (IDP).

Municipal spokesperson Madikizela-Vuso says that due to industrial action at the municipality, which started in June and ended last week, the project has been delayed.

The municipality risks losing an additional grant of R493-million for the scheme, because it has failed to spend the first R100-million tranche. The municipality has blamed this on staff protests as well.

The Equality Collective, along with several other organisations and community members, has emphasised the municipality’s governance crisis as the reason for the failure to spend. 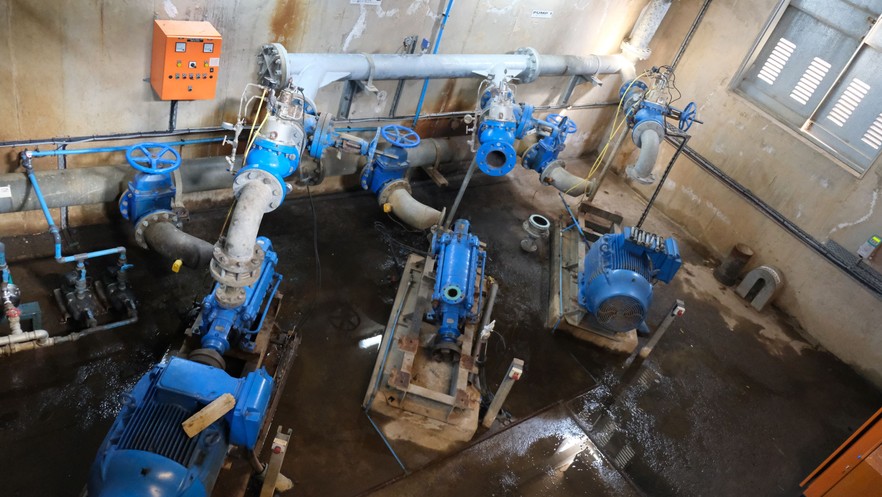 Two of the three pump stations at the Mncwasa water treatment works are not operating. Photo: Daniel Steyn

Jim Gibson, one of the engineers who analysed the Equality Collective’s survey data, says that to run the Mncwasa water scheme, frequent (preferably daily) data on performance is needed.

For this reason, the scheme has to be carefully monitored every day and a skilled operator needs to interpret the data to identify action to be taken to ensure equitable distribution of water across the scheme.

The municipality does not have the capacity to gather this real-time data. So the Equality Collective, in partnership with ward councillors and traditional leaders, has developed a volunteer network to do so.

Amanzi Kumtu Wonke (Water for Everyone)

Zandile Dlaliduduma met GroundUp at the reservoir in Gobeni village, which she visits daily to check on the water flow. “Having water in the taps makes life much easier,” she says. “I want the community to get water, that’s what inspires me.”

Dlaliduduma is one of 31 volunteers recruited by the Water Advisory Committee. The volunteer network was established to provide the municipality with real-time data on the status of the scheme and to develop a culture of reporting in the communities. Every day, volunteers check the reservoirs, break-pressure tanks, taps and pipes for problems or leaks. They are unpaid but receive training and 1GB of data a month.

The data is then communicated to Noluvo Mandukwini, Equality Collective’s Right to Water coordinator, who compiles the data in a report and shares it with the Advisory Committee and municipal staff members.

Sibulele Mango was employed to work on the scheme during its construction. He says it is sad to see how the scheme has been left unmaintained. As an Amanzi Kumtu Wonke volunteer, he says he hopes to see the scheme restored. 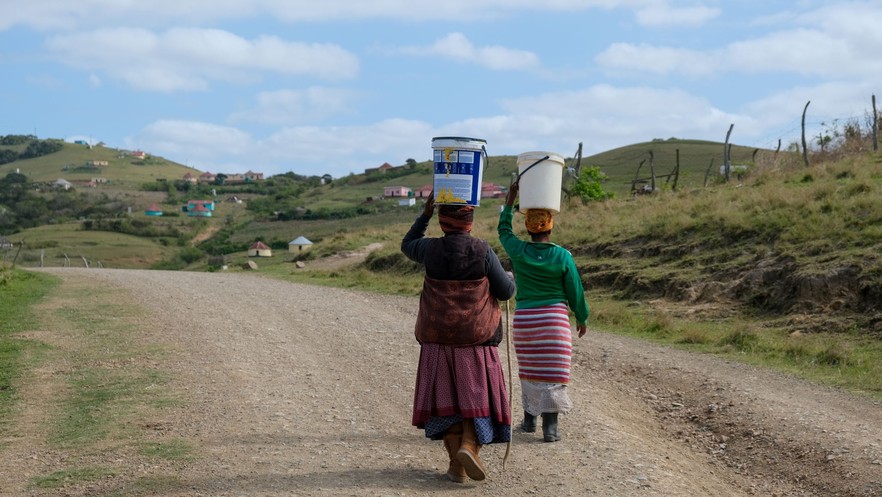 In Centane, also in the Amathole District, the municipality is being sued by the community, represented by Webber Wentzel Attorneys, for not fulfilling the constitutional mandate to supply water.

Peacock says municipal staff have been responsive but they do not have the budget and resources to effectively respond to leaks. The municipal spokesperson Madikizela-Vuso confirmed this.

But the way forward is unclear. Peacock says the recruitment of a qualified municipal manager, through a proper recruitment process, is a priority. But there is no quick fix to the municipality’s financial woes.

National government tends to intervene too late in municipalities when the municipality is already in total crisis, Peacock says.

He says in the 2000s, a commodities boom enabled the South African government to invest in large infrastructure projects. But when it came to maintaining the infrastructure, the responsibility of local municipalities, things started to fall apart.

“It’s a question of who pays,” Gibbs says. 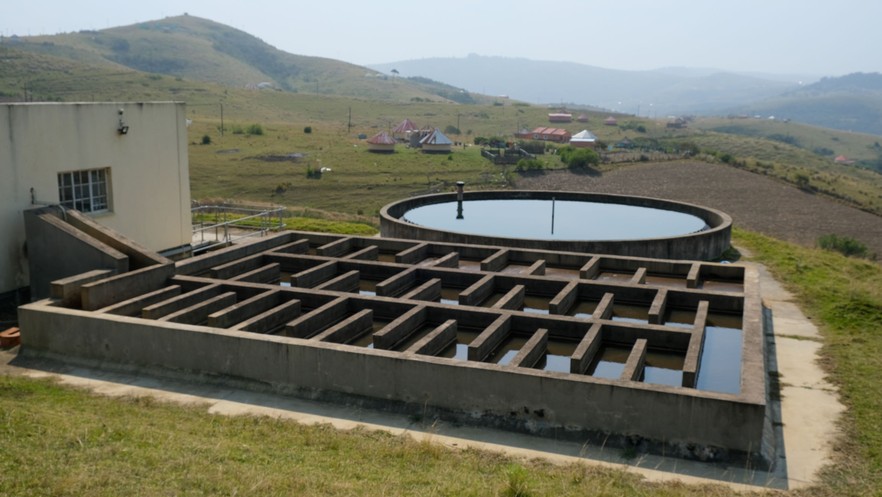 The Mncwasa Water Scheme, completed in 2015, was built by the municipality at a cost of R125-million. The scheme has a central water treatment plant that pumps water to 31 reservoirs and thousands of communal taps. But only five years in the scheme started to give problems and it is now barely able to supply water. Photo: Daniel Steyn

This article was updated to include the correct spelling of the following names: Buzman Mdyose, Zandile Dlaliduduma and Sibulele Mango