Prospects and pessimism at jobs roadshow

Bitou municipality and national departments and agencies presented opportunities to young people. Some attendees welcomed it, but others remained doubtful. 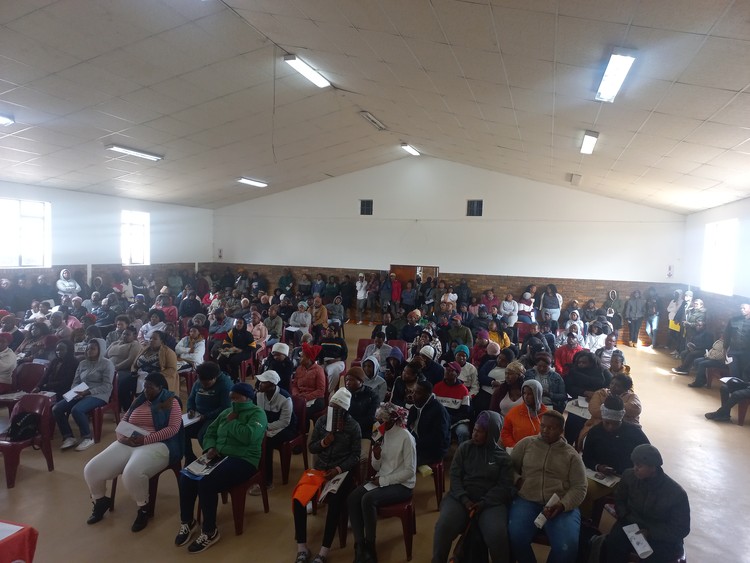 When Vathiswa Nofemele graduated with a degree in social work in 2016, she didn’t expect to be working as a part-time domestic worker six years later. But in Plettenberg Bay, there aren’t enough jobs for someone with her degree.

Nofemele was among 150 people waiting outside Simunye Community Hall to enter the #lookingforajob roadshow, hosted by the Bitou Municipality on Thursday. Even more people were inside the hall when we arrived. The event was one of six stops this week, aimed at combating youth unemployment in the area. Two similar unemployment roadshows were held earlier this year.

Inside the hall, Department of Labour officials collected CVs, added people to their unemployment database, and offered career guidance. Officials from the National Youth Development Agency (NYDA) informed people about the business grants that they offer, how to register their businesses, and had their own unemployment database registration. CellC was recruiting people to sell their sim cards, with entry into a learnership program offered for those who sell the most.

After graduating, she attended a one-year learnership course in 2018 with the Department of Agriculture, via the Bitou Municipality Youth Development Programmes. She had hoped adding a further qualification would open more job opportunities to her. It didn’t.

Instead of an income in line with her qualifications, she earns R2,500 a month and uses R650 of that on transportation. Nofemele cannot leave Plettenberg Bay to find a job as a social worker elsewhere. She is responsible for her mother, who is disabled, her younger brother, her cousin, her sister’s children, and her own son.

Bitou: employment beyond the tourism sector?

According to Duncan Meyer, a youth and sports development agency officer at the municipality, about 600 young unemployed people attended the roadshow events, which began on 15 August.

Jacobus de Jongh, a career counsellor in the Labour Department, said that this year they have placed 150 people into Labour Department-funded learnerships, and have helped 361 people find employment and learning opportunities in the Knysna and Bitou District.

According to the Department of Labour, in the Western Cape there are 304,427 youth work seekers on their database, out of a total of 690,022 people. The Department says it has registered 162,184 people and has placed 32,193 people into learnerships and jobs since the beginning of the year.

According to the Western Cape Government’s 2021 socio-economic profile of the municipality, Bitou has the highest unemployment rate in the Garden Route District at 24% in 2020. The profile does not give a figure for youth unemployment, but youth unemployment is generally higher than the official rate. According to Statistics South Africa’s Quarterly Labour Force Survey for the first quarter of 2022, the unemployment rate was 64% for those aged 15 to 24 years, and 42% for those between 25 and 34 years, while the current official national rate stands at 35%.

Hope from the roadshow

Chumani Seyisi also attended the roadshow. He has studied towards a national diploma in human resource management, but he says that he needs to be employed as an intern for a year in order to get his diploma. “Every time I apply for a job, they want someone who has a diploma,” he said.

Seyisi also works as an informal livestock trader, buying and selling pigs. He wants to continue farming. He was glad that he attended the presentation from the National Youth Development Agency. He told GroundUp that he now plans to register his business so he can qualify for funding from the agency.

Next:  Iconic women’s housing project of the 1990s, today awash in sewage