About 300 people in Erasmuskloof, Pretoria East, live on land owned by the City of Tshwane 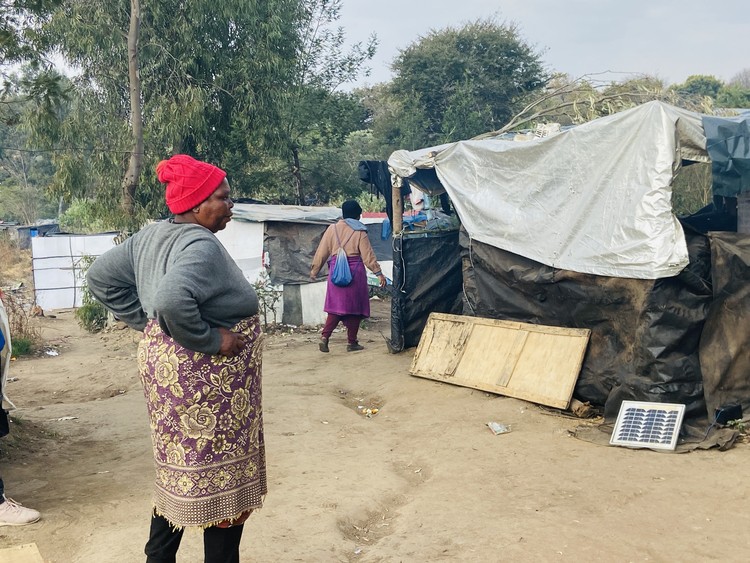 Julia Nkgase is among 300 people living in an informal settlement in Erasmuskloof, Pretoria East. They could be evicted soon if the City of Tshwane secures a court order against them. Photos: Mosima Rafapa

Kabelo Mamabolo is among 300 people facing eviction from land owned by the City of Tshwane in the Wolverspruit informal settlement in Pretoria East. They are battling through the cold winter but fear they may be homeless soon.

He says they first got eviction notices in November 2021. Then on 25 July this year they got a notice warning them to demolish their homes and move or face being forcefully evicted through court action. The next day, metro police accompanied by private security guards arrived and demolished at least five shacks, he says Mamabolo’s home was one of those destroyed.

“Some slept on old sofas, others on mattresses on the ground. They took all our material,” says Mamabolo. He says they asked a lawyer to help them fight the eviction pro bono but he has not been responding to their recent calls for help.

Mamabolo, 30, moved to the settlement from Mamelodi more than ten years ago. He works as a carpenter and relies on jobs from the nearby suburbs.

Tshwane’s metro police department spokesperson, Isaac Mahamba, confirmed the demolitions. “We should emphasise that we have zero tolerance of illegal occupation of land. We will monitor hotspots known to us and continue to visit them,” he said.

According to a court application seen by GroundUp, the City proposes to relocate the occupiers to Orchards Extension 10. If the occupiers refuse to move, their shacks are to be demolished, according to the application. However, the court dismissed the City’s urgent application in November. Mayoral Committee member Kingsley Wakelin said a new application had been filed but could not give a date for the hearing.

Ward 83 Councillor Francois Bekker said he hoped the matter would be heard before the end of this year. He said the site is a wetland. “Why the court dismissed the urgency of the matter is bizarre,” he said.

Community leader Annah Lekalakala said, “We don’t mind moving but what about people’s jobs? Some people work for R150 a day. What would they eat?”

According to Lekalakala, some people in the settlement settled on the land more than two decades ago. She herself moved there in 2009 after losing her job as a domestic worker. 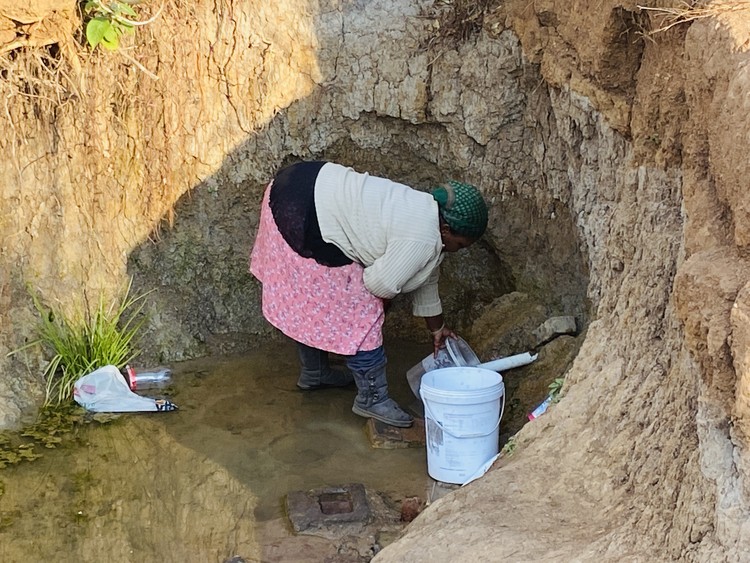 Resident Joyce Masenya collects water from a stream flowing through the settlement.

Lekalakala said the community is also home to a group of immigrants from Lesotho.

There is no electricity or toilets. Residents collect water from a stream flowing between the structures. Most survive on informal jobs, waste picking, begging at the robots and selling traditional beer.

Agnes Ramonti from Lesotho moved to South Africa in 1993 where she started working as a domestic worker. “We’d sleep on the open field and cover ourselves with plastic sheets when it rained and make an open fire to keep warm. Now my children are old,” said Ramonti.

Lerato Thamane said she moved to the settlement when she lost her job last year during the Covid pandemic. Thamane supports six of her children who still live in Lesotho. She relies on profits from her tuck shop and some domestic work. “What makes it bearable is that we are able to hustle and send money home,” she said.